11 AM UPDATE: Hurricane warning issued for Cuban provinces ahead of Ian 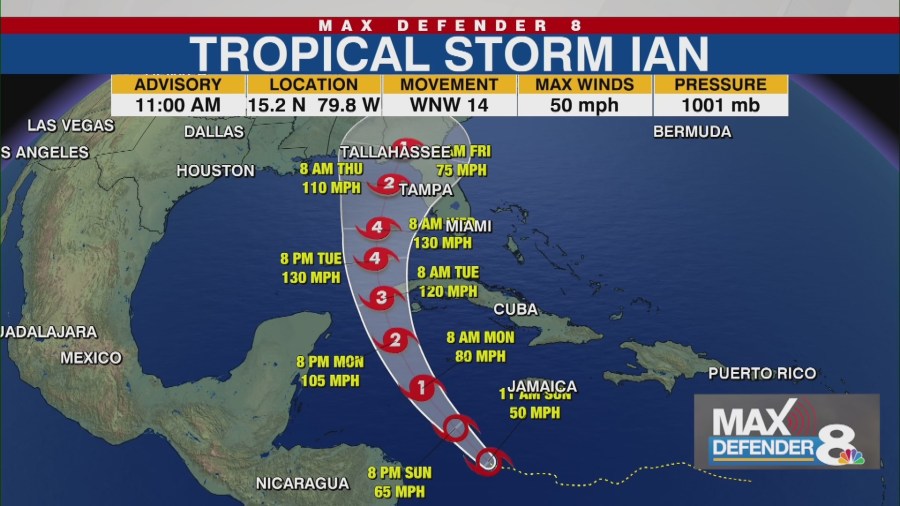 TAMPA, Fla (WFLA) — Tropical Storm Ian is expected to strengthen into a hurricane Sunday as it continues to make a projected path toward Florida, according to the National Hurricane Center.

The 11 a.m. advisory said that Ian was 300 miles south-southeast of Grand Cayman and 570 miles southeast of the western tip of Cuba. The tropical storm had maximum sustained winds of 50 mph and was moving west-northwest at 14 mph.


Where to get sandbags in Tampa Bay

Rapid strengthening is expected to turn Ian into a hurricane Sunday, either in the daytime or nighttime.

According to the NHC, the center of Ian was expected to pass Jamaica Sunday. It would then move near or past the Cayman Islands early Monday morning before it gets near Cuba Monday night or Tuesday morning.

“[The hurricane] is expected to turn into the eastern Gulf of Mexico this week passing just to the west of the Bay Area,” meteorologist Eric Stone said. “We should feel impacts late Tuesday through Friday. Rain, wind, and storm surge depend on Ian’s exact track.”

The NHC predicted that by Monday, Ian could reach major hurricane strength, which is at least a category three. The updated live track, which has continued to shift westward, now shows Ian as being a category four while in the gulf.

Florida is expected to feel the first of Ian’s impact through the midweek, with flash and urban flooding possible due to rainfall across the Florida Keys and Peninsula. The NHC now believes northern Florida and parts of the southeastern United States may also see flooding and rising waters in rivers and streams.

The NHC said the Florida Keys and the southern and central portions of the Florida Peninsula could see two to four inches of rain with maximum local totals of six inches starting Monday through Wednesday.

A Hurricane Warning is in effect for:

A Tropical Storm Watch is in effect for:

Driver injured in October crash on I-40 at Strawberry…