25 years of Mercedes-Benz A-class: this made the car unique 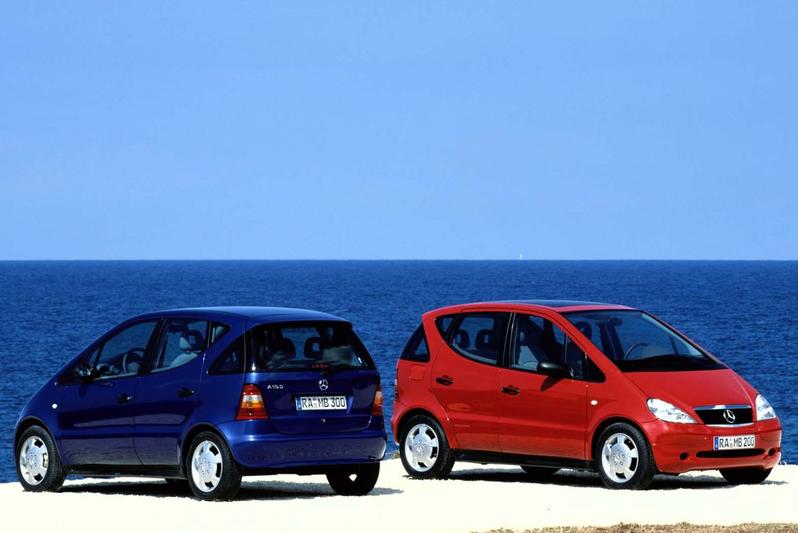 Mercedes-Benz has a strong reputation in the early 1980s as a manufacturer of large, representative cars. Among those large cars, the 190 presented in 1982 is referred to as the baby-Benz, while that car is a true four-door sedan in the classic Mercedes tradition. The 190 and its successor the C-class remain the Benjamin until Mercedes-Benz presents the A-class (W168) at the Geneva salon in March 1997. The A-class is a compact five-door, higher than the regular middle-class hatchbacks and it is a front-wheel drive, completely different from what we had seen at Mercedes up to that time and actually completely different from what other car manufacturers build. What are they doing in Stuttgart?

Although the 190 is already quite compact by Mercedes’ standards, the manufacturer is also looking behind the scenes at even smaller mobility solutions. For example, in 1982 – long before we got to know the Smart – the brand presented the experimental NAFA (Nahverkehrsfahrzeug), an extremely compact two-seater city car with four-wheel steering and sliding doors. A next experiment – ​​now slightly less compact, but still not very big for Mercedes – we see in September 1993 in Frankfurt at the IAA: the Vision A93. Six months later, the Study A is in Geneva, a further development of the Vision A93. Both study models are projected with 1.2-liter three-cylinder petrol and diesel engines, but also with purely electric drive. With these cars, Mercedes shows for the first time that it is working on a double bottom, as it will later apply to the A-class.

That double bottom is not just there. For the how and why we move to the American west coast in the early 1990s. The California Air Resources Board (CARB), in California responsible for air quality, among other things, has the idea that from 2003 at least ten percent of the cars to be sold must be emission-free, in other words electric. General Motors responds with the EV1, an ultra-sleek two-seater. Mercedes is working on a more practical car. The idea is to house the batteries under the floor, in a sandwich base. Under pressure from the oil industry and the Detroit big three, the California EV plan stalls prematurely. The development of the double bottom car is already at an advanced stage in Stuttgart; too far to pull the plug on the project. Incidentally, that car was not only conceived as an EV, but also with combustion engines. Thus, in 1997, we were introduced to the relatively high A140 and A160, fitted with 82 and 102 hp petrol engines respectively. An automatic transmission and more engines will follow later, including diesels. Those engines are tilted far forward in the short nose. The gearbox is partly hidden under the floor.

Thanks to modern EVs, we now know that a battery pack under the floor contributes to a low center of gravity and therefore to a high degree of stability. However, the A140 and A160 do not have a battery pack, but as a legacy of the EV project, they still have the high construction on the double floor. The relatively high center of gravity as a result contributes to the A-class tipping over in October 1997 during a fall-back test of a Swedish magazine. It turns out that the car was on the wrong tires during the test and there are still a few things that indicate manipulation. After all, with a little ill will, you can also put a low sports car on its roof. Mitigating circumstances or not, the damage has been done: the A-class is the car that can fall over.

Mercedes will stop production for twelve weeks and will have to pull out all the stops to limit the reputational damage as much as possible. Mercedes adapts the chassis of the A-class with thicker stabilizer bars, a different tuning of springs and shock absorbers and will receive ESP as standard from February 1998, as the first front-wheel drive. Until then, this still young technology is still something for cars from the top segment. Outwardly, Mercedes tries to be sporty. In the Mercedes shop at Stuttgart Airport, for example, we even see plush moose stuffed animals appear after a while, which refer with a wink to that dramatic moose test.

The A-class appears to be an excellent starting point for numerous technical experiments. As early as 1997, we were introduced to the NECAR 3 (New Electric CAR), an A-class equipped with fuel cells that generate electricity for an electric motor. The NECARs 1 and 2 are still moving laboratories packed in a delivery van. Mercedes wants to show with the NECAR 3 that fuel cell technology is becoming more and more compact, so how do you demonstrate that better than in an A-class? When the undersigned is allowed to try the NECAR 3 on the test track, the riding engineer reports that he expects fuel cells to be ready for mass production within five years. 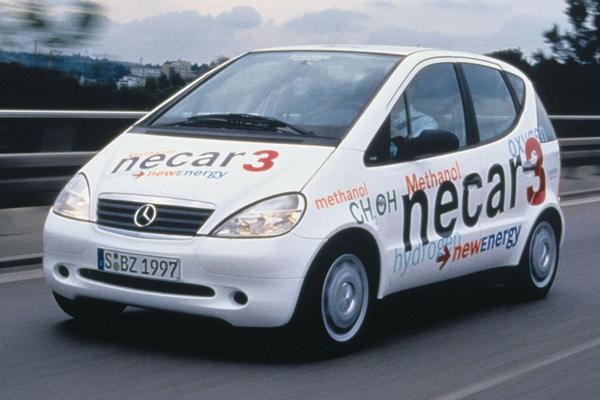 It is a term that will be maintained for years to come, but now we know better. Nice detail: the NECAR 3 does not have a hydrogen tank on board, but an installation in the trunk that converts methanol into hydrogen. A next generation, the NECAR 4 from 1999, is already a lot more practical and does have hydrogen tanks, which are housed in the sandwich bottom. In 2000, with the NECAR 5, Mercedes reverted to the concept of version 3: converting methanol into hydrogen, but now the entire installation is concealed under the floor. Despite all efforts, fuel cell cars are still not in the Mercedes showroom. This is in contrast to EVs. In November 1998 the A190 Twin appeared, an experiment with two 1.9-litre petrol engines, each producing 125 hp. One engine is in its original position and drives the front wheels, the second engine is concealed under the floor of the luggage compartment and provides rear-wheel drive. The sprint from 0 to 100 km/h should be possible in 5.7 seconds and the top speed is 230 km/h. He can also slow down quickly, because the brakes of the E55 AMG are located behind the front wheels and disc brakes are also used at the rear. A wild spoiler package should keep the car grounded. It is a project from the series ‘Nice that it is possible’.

Another project is the hybrid HyPer a year later. The starting point is an A170 CDI with a 90 hp diesel engine. Now the double bottom is finally being used for which it was originally intended: housing a battery pack. This battery powers a 39 hp electric motor, which drives the rear wheels. As a result, the HyPer sprints from standstill to 100 km/h in 8 seconds, against 13 counts for the regular A170 CDI. It is also a lot more economical. 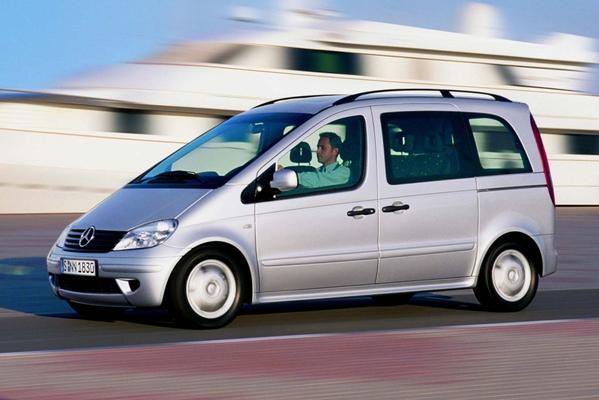 Variations on the theme

In addition to all the driving testing grounds, Mercedes also does not forget the buying public. When McLaren wins the Formula 1 World Championship in 1998 with Mercedes engines, team-coloured versions of the A-Class appear, which go through life as Coulthard and Hakkinen Editions, after the two McLaren drivers of the time. The A-class L with a 17 centimeter longer wheelbase will make its debut at the Geneva Motor Show in March 2001. Those centimeters mainly benefit the rear passengers, who sit on a sliding bench. The A LWB is even available with a special taxi package, in which space is reserved for the taximeter on the center console and the cabling for a taxi sign has already been laid on the left side of the roof frame. Furthermore, two child seats are standard equipment. As if that weren’t enough, later in 2001 we are introduced to the Vaneo, an MPV with the nose of the A-class and the back of a van. This orderer will not become a bestseller. Although the A-class itself is not the smoothest appearance, until the second generation makes its appearance in 2004, 1.1 million A-classes of the W168 generation eventually roll off the production line.

This article originally appeared in AutoWeek Classics issue 6 from 2022.