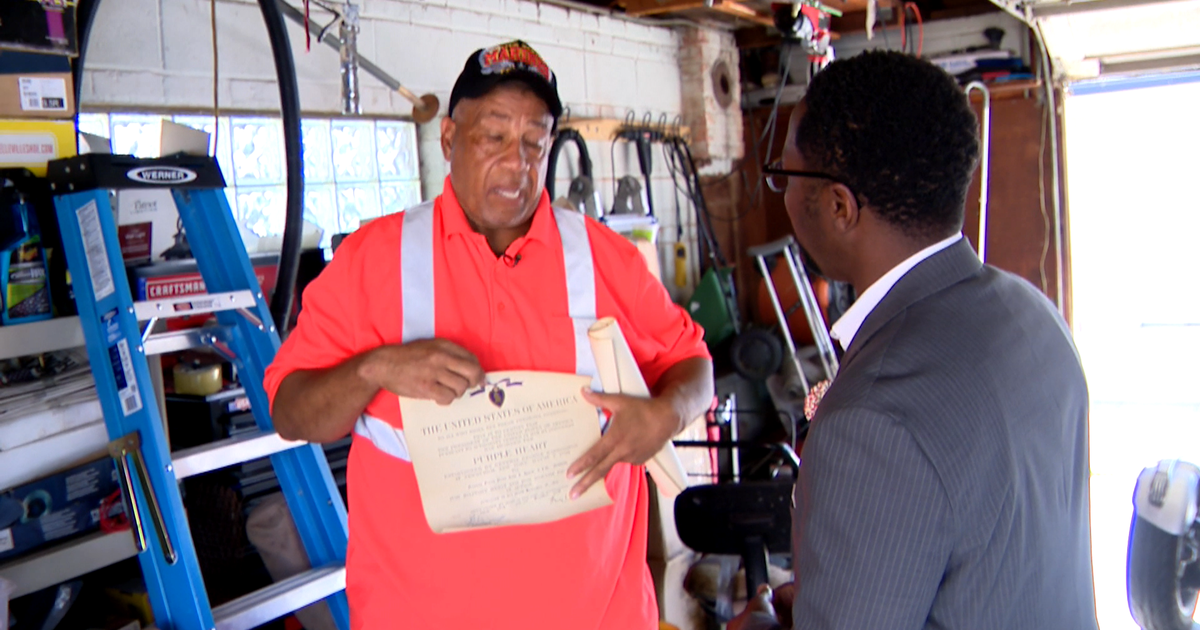 CHICAGO (CBS) — It’s a significant piece of history and a symbol of courage and sacrifice – this week, a Purple Heart certificate was found in a dark and dusty garage on the city’s Southwest Side.

As CBS 2’s Jermont Terry reported Tuesday night, a local veteran is now on a new mission – linking him to another hero who paid the ultimate sacrifice.

It all started when veteran Kerry Johnson found himself “tired of the garbage being cluttered.” He grabbed is broom and began cleaning out his garage.

He never imagined what was tucked and hidden in the rafters.

“I just so happened to go up there messing with them boxes – what did I find?” Johnson said.

His eyes became locked on a dusty cylinder object.

“As a I got up, I noticed it, and I reached and grabbed it – and I brought it down just like this. I opened it,” Johnson said as he climbed down a ladder to demonstrate. “I said, ‘Oh, what’s this?’ And I opened it up – there it was.”

Unbeknownst to Johnson, who is a U.S. marine veteran, he had discovered a piece of history dating back to 1944.

“There it was – a certificate for a Purple Heart,” he said.

And being a veteran himself, Johnson knew the significance of that certificate very well.

It was signed by the 32nd President of the United States, Franklin Delano Roosevelt.

The certificate was awarded to Private First Class John J. Lynch, who served in the 142nd Infantry, 36th Division.

But Johnson had many questions. Who was this soldier? Where was his family? And how long were these documents tucked away in that garage?

“I thought about it all night, and I said I had to go to news station,” Johnson said, “and I always watch Channel 2.”

Mr. Johnson trusted CBS 2 with the precious records, and our news team went to work. We contacted several government agencies before the Purple Hearts Reunited Organization connected the dots.

It turns out Pfc. Lynch was from Chicago. A newspaper clipping shows he died in World War II.

We shared his military death notice with Johnson.

Lynch’s military registration card shows in 1943, Lynch and his mother, Margaret, on Chicago’s West Side. A year later, he was killed in action in France at the age of 19.

Lynch was buried overseas. Now Johnson believes it is no coincidence he found what he did in his garage.

“This veteran right here this is my friend. Even though he’s gone, he’s still a veteran just like me,” Johnson said. “I just hope and pray you find the family – I really do.”

And if Pfc. John Lynch’s family remains in Chicago, or anyone knows them, we want to return the certificate. Johnson has lived in his home for five years, and he said he is going to keep looking through old boxes to see if a Purple Hart medal is tucked away too.

Jermont Terry joined the CBS 2 team in October 2019. He’s born and raised on Chicago’s South Side. He’s happy to return home to report on his community after 18 years of uncovering stories across the country.