A leap of faith: what it’s like to rappel for a cause 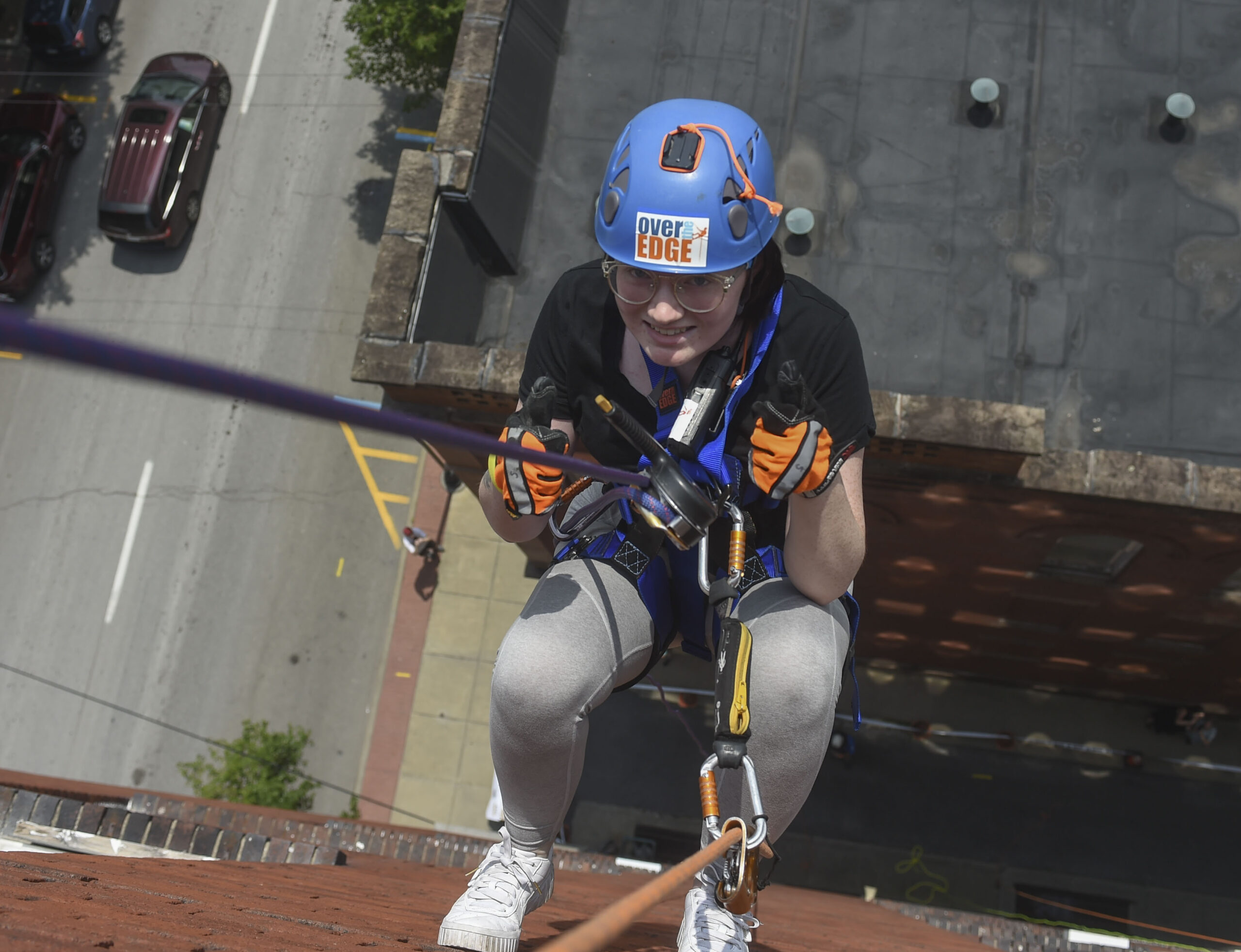 MORGANTOWN — Last week, I made the decision to join a host of other people who had signed up to participate in Libera’s Go Over the Edge fundraising event.

Registered individuals undertook a campaign to raise money for the organization, which provides support and resources to women and at-risk youth in West Virginia.

Then, beginning Friday and continuing Saturday, the participants engaged in urban rappelling from the roof of the Monongahela Building on High St. in downtown Morgantown.

My choice was an abrupt, impulsive one. I am what I like to call “situationally adventurous” – I typically keep to myself and prefer to pass my time by soaking up the welcoming warmth of my couch, Stephen King book in hand or an episode of “Law & Order: SVU” on the television.

But when I find myself in a rut, or I’m stressed almost beyond my limits, I often find myself involved in activities that push me even further out of my comfort zone.

I’ve been ziplining during one of the most challenging times in my life; I’ve undertaken a nearly five-hour road trip despite my general nervousness about driving following my mother’s diagnosis with breast cancer; and this week – in the midst of a move and a career change – I lowered myself off the top of an eight-story building.

In the days leading up to the event, I tried to think of what I would be doing Friday as being similar to ziplining. According to the individual who helped me suit up in my harness and the one who gave me a five-minute training session on how to rappel, I wasn’t far off – rappelling is fairly comparable to ziplining, except it’s vertical and you’re in charge of the pace.

When I stepped out onto the roof, accompanied by a photographer and the trainer, my stomach dropped into my shoes. I kept my cool through the training session and while my harness was being hooked up to ropes.

It wasn’t until the guide told me to lower myself off the edge of the roof like I was “getting into a pool” that I felt fear for the first time since agreeing to represent The Dominion Post at the fundraising event.

I asked the guide for a moment, as tears welled up in my eyes. I had made the mistake of looking down over the top of the Monongahela Building, and the reality of the distance between myself and the ground had set in. The guide obliged and when I was ready, and he was sure I was ready, he helped me lower myself over the edge of the roof.

I learned Friday what it really means to “go over the edge.” The spectators below me, a group which included my boyfriend and Libera Founder and Executive Director Karen Haring, looked like ants.

I descended a few feet and was asked to pose for a couple of pictures for the photographer: one with my thumbs up, lips parted in what was supposed to be a smile, but probably looked more like a pained grimace. In the other photo, I had my arms outstretched and my face tilted toward the sun.

Then, the rappelling really began. I reminded myself that in addition to the main rappelling device, I was attached to a “backup.” The trainer had explained that the backup acted as a seatbelt for rappelers in that it would stop them from descending if they started to rappel too quickly.

The backup wasn’t used during my descent, as I took my sweet time and only pulled the lever that propelled me downward ever-so-gently. I wanted to be back on the ground more than anything in the world, but I didn’t want to do it so quickly that I missed out on such a unique experience.

When I was in the air, I felt weightless. My feet barely brushed against the brick exterior of the building as I slowly made my way down it. I counted the rows of windows above me to determine how much farther I had to go. This was an act of prevention, one that stopped me from looking down at the ground and becoming overwhelmed by anxiety.

One row of windows above me. Then two. Three. Four. I was halfway there. This was the point that I really started to realize what I was doing, how excited I was to be doing it, and what an amazing thing it was.

I heard people cheering me on from below. Haring was one of them, as was my boyfriend. The other voices were ones that I had never heard before, but they yelled my name like they had known me all my life and wanted nothing more than to see me successfully reach the bottom of the rope.

With seven rows of windows above me, the guide’s voice crackled through my radio and asked me to pause where I was until the photographer came downstairs so that he could capture some photos of me touching down. I stopped, suspended in the air, and waited. I looked down, much more comfortable with what I saw then than what I had seen from the very top of the building.

I watched as the photographer emerged from the building and finished my descent, slow and steady.

I felt a mixture of relief and disappointment when my feet found the ground. I simultaneously wished that the descent had lasted longer and that I could stay on the ground for the rest of my life.

Fittingly, when Harding asked me if I thought I’d participate in the event again next year, I answered: “Maybe.”

I never imagined myself as the type of person who had the guts to do something as adrenaline-pumping as urban rappelling, but I did it. I had no idea what I was capable of until Friday.

Although I’ve managed to write nearly 1,000 words about what my experience at Libera’s Go Over the Edge event was like, sometimes words are simply not enough to describe the feelings elicited by a physical experience.

At the end of my campaign, I had raised $1,240 for Libera. That is an incredible number, more than my goal and more than I could have ever anticipated I would raise. I would like to thank everyone who donated to my campaign and express my utmost gratitude to them for doing so, as well as to Libera for hosting this event in our city.

In closing, I will say this: if you’re thinking about joining in on this event, even just in passing, do it. You don’t have to do it every year, but you should do it once. Get out of your comfort zone. Push yourself. Find out what you’re capable of.