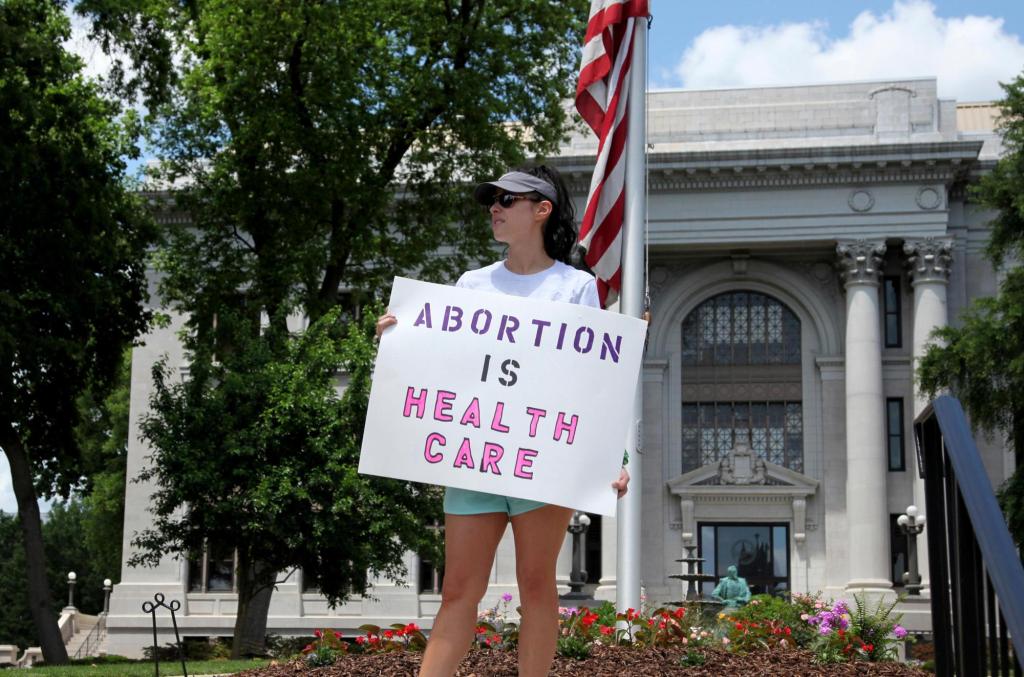 By AMY FORLITI and GEOFF MULVIHILL

A federal court Tuesday allowed Tennessee to ban abortions as early as six weeks into pregnancy, while a Texas judge temporarily blocked enforcement of that state’s ban on virtually all abortions, in a flurry of activity set off at courthouses across the U.S. by the overturning of Roe v. Wade.

Statewide bans or other restrictions that were either left on the books for generations, tied up by legal challenges or specifically designed to take effect if Roe were to fall are now in play as a result of last week’s Supreme Court ruling eliminating the constitutional right to terminate a pregnancy.

Roughly half the states are expected to prohibit or severely limit the procedure now that the high court has left it up to them.

Since Friday, judges have agreed to allow bans or other restrictions to take effect in Alabama, Ohio, South Carolina and Tennessee. But abortion bans remained temporarily blocked in some states, including Louisiana, Texas and Utah. Decisions are pending in other places, including Florida and Indiana.

The legal maneuvering has left some clinics wondering how to proceed. Abortion clinics in Louisiana reopened on Tuesday, while North Dakota said that state’s only abortion clinic would shut down at the end of July, probably forcing patients seeking abortions to head across the state line to Moorhead, Minnesota.

In Tennessee, the 6th U.S. Circuit Court of Appeals allowed a six-week ban to take effect at the state’s request. An even more restrictive ban, prohibiting nearly all abortions, is set to take effect in a month. Both measures would make performing an abortion a felony and subject doctors to up to 15 years in prison.

In Houston, a judge blocked enforcement for now of a statewide ban on virtually all abortions, according to a group representing abortion clinics in the state.

“It is a relief that this Texas state court acted so quickly to block this deeply harmful abortion ban,” said Marc Hearron, senior counsel at the Center for Reproductive Rights.

Abortions in Texas are still prohibited at about six weeks because of a law that took effect last year.

The U.S. Supreme Court’s decision opened the gates on a wave of litigation. One side is seeking to put statewide bans into effect swiftly, while the other is trying to stop or at least delay such measures.

Much of the court activity focused on “trigger laws” adopted in 13 states that were designed to take effect quickly upon last week’s ruling. Additional lawsuits could also target old anti-abortion laws that were left on the books in some states and went unenforced under Roe. Newer abortion restrictions that were put on hold pending the Supreme Court ruling are also coming back into play.

Abortion rights supporters gathered at the South Carolina statehouse Tuesday. Merritt Watts, who moved to South Carolina from California last year, said if she still lived in California, she would have “completely different rights.”

“I used to think of red states as someone else’s problem, but it’s not,” the Charleston resident said. “They deserve what Californians have.”

Forliti reported from Minneapolis and Mulvihill from Cherry Hill, New Jersey. Associated Press writers across the U.S. contributed to this report.

For AP’s full coverage of the Supreme Court ruling on abortion, go to https://apnews.com/hub/abortion.

State grants have been held up for…