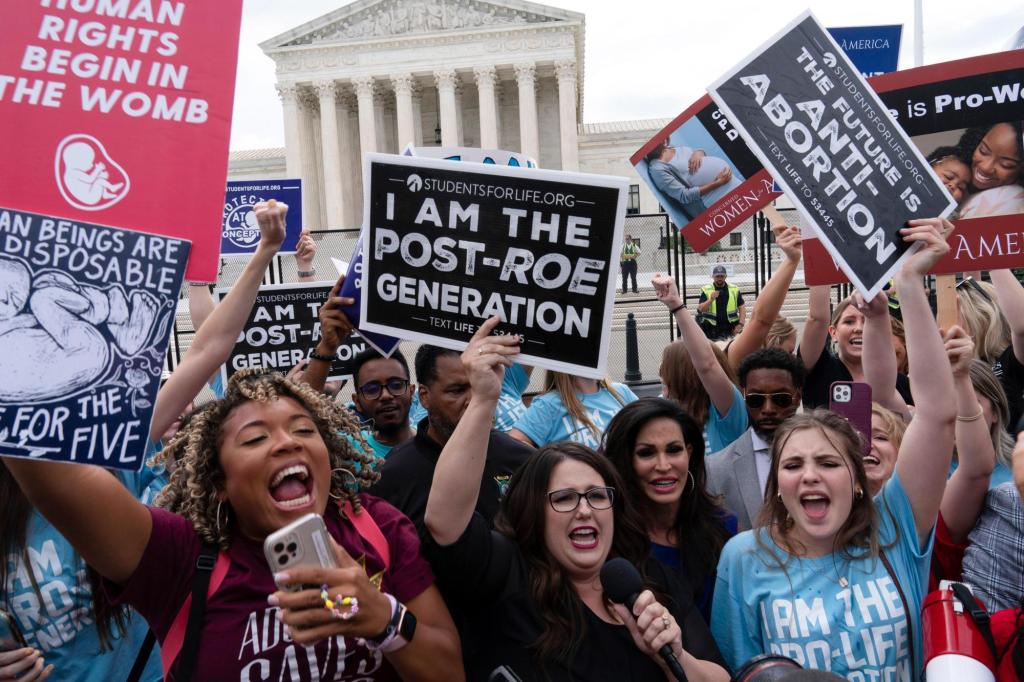 The Supreme Court on Friday extinguished the constitutional right to abortion, ending the 49-year reign of Roe v. Wade and unleashing a tsunami of outrage about health care access for women, who could see reproductive rights roundly restricted in half the country.

The momentous 6-3 ruling, delivered in a Mississippi case, had been expected after a draft majority opinion leaked to the news media in May, and came from a conservative high court that was remade by President Donald Trump to tilt far farther to the right.

The decision represented a seismic political shock — perhaps the court’s most polarizing work in generations — and could transform the fall midterm elections, driving Democratic enthusiasm in a cycle that was expected to heavily advantage out-of-power Republicans.

In a somber speech at the White House, President Biden described the ruling as “cruel” and “tragic,” saying its effects would fall heavily on poor women.

“It’s a sad day for the court and the country,” the president said in his 12-minute speech. “The court has done what it has never done before: expressly take away a constitutional right that is so fundamental to so many Americans that it had already been recognized.”

Republicans, however, celebrated the Supreme Court decision. Former vice president Mike Pence is calling for a national ban on the procedure, while former president Donald Trump argued the court’s decision is “something that will work out for everybody.”

“Having been given this second chance for Life, we must not rest and must not relent until the sanctity of life is restored to the center of American law in every state in the land,” Pence told Breitbart. The former VP is seen as a GOP candidate for president in 2024.

Trump said on Fox the court is “following the Constitution, and giving rights back when they should have been given long ago. I think, in the end, this is something that will work out for everybody.”

In overturning Roe, the court’s conservatives bucked the view of the majority of Americans, who have long opposed a reversal of the 1973 decision, according to opinion polls. Roe was decided by a 7-2 vote.

The final decision in the new abortion case, Dobbs v. Jackson Women’s Health Organization, mirrored the leaked draft in myriad ways, though Chief Justice John Roberts, a conservative, joined the majority after dissenting in the draft.

Roberts suggested in a concurring opinion that he would have preferred to uphold the Mississippi law — which bans most abortions after 15 weeks of pregnancy — without taking the “dramatic step of altogether eliminating the abortion right first recognized in Roe.”

But the court’s other five conservatives seemed set on quashing Roe. Justice Samuel Alito said in the court’s majority opinion that “Roe was egregiously wrong from the start” and that its “reasoning was exceptionally weak.”

“It is time to heed the Constitution and return the issue of abortion to the people’s elected representatives,” Alito wrote.

The court’s three liberal justices joined in an incandescent dissent, writing that the court had laid waste to a “constitutional right that safeguards women’s freedom and equal station,” placed in jeopardy other rights including “same-sex intimacy and marriage” and undermined the court’s own legitimacy.

“With sorrow — for this Court, but more, for the many millions of American women who have today lost a fundamental constitutional protection — we dissent,” said the rebuttal from Justices Elena Kagan, Stephen Breyer and Sonia Sotomayor.

Why Is My Cat Panting With His Mouth Open? The Causes of and Solutions to Excessive Panting in Cats

This Green Grape Gazpacho recipe is just the thing for a…

This Green Grape Gazpacho recipe is just the thing for…