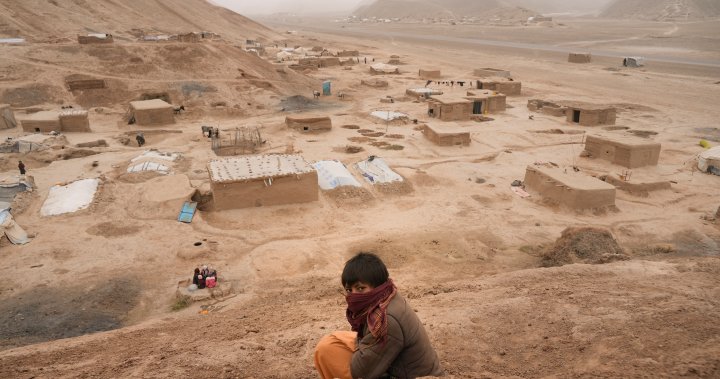 Fed by rain and snowmelt from mountains, this valley nestled among northwestern Afghanistan’s jagged peaks was once fertile. But the climate has changed in the last few decades, locals say, leaving the earth barren and its people struggling to survive.

Many have fled, heading to neighboring Iran or living in abject poverty in camps for the displaced within Afghanistan as repeated droughts parch the land and shrivel pastures.

“I remember from my childhood … there was a lot of snow in the winters, in spring we had a lot of rain,” said 53-year-old Abdul Ghani, a local community leader in the village of Sang-e-Atash, in the hard-struck province of Badghis.

“But since a few years ago there has been drought, there is no snow, there is much less rain. It is not even possible to get one bowl of water from drainpipes to use,” he said, as he observed the Red Crescent Society handing out emergency winter food supplies to farmers whose crops have completely failed.

The severe drought, now in its second year, has dramatically worsened the already desperate situation in the country. Battered by four decades of war, Afghans have also had to contend with the coronavirus pandemic and an economy in freefall following the freezing of international funding after the Taliban seized power in mid-August amid a chaotic withdrawal of U.S. and NATO troops. Millions can’t feed themselves, and aid groups warn of rising malnutrition and a humanitarian catastrophe.

For many families in the Sang-e-Atash area, the Red Crescent aid is their only lifeline for the harsh winter. The organization’s regional head for western Afghanistan, Mustafa Nabikhil, said 558 families had received the food over three days: flour, rice, beans, cooking oil, sugar, salt, tea and high-calorie, vitamin-fortified biscuits.

Badghis’s farmers are particularly vulnerable as the region lacks an irrigation system, leaving them dependent on the weather, Nabikhil said.

2:35
‘Everything got worse’: Afghanistan press freedoms restricted under Taliban rule

If it rains, they will eat. If it doesn’t, they won’t. Their desperation is palpable.

“There is no solution, we are just destroyed,” said Ghani. “We can’t go anywhere, to a foreign country, we have no money, we have nothing. In the end we must dig our graves and die.”

Necephor Mghendi, head of Afghanistan Delegation of the International Federation of Red Cross and Red Crescent Societies, said drought is leading to “worrying food shortages, with around 22.8 million people — more than 55 per cent of Afghanistan’s population — experiencing high levels of acute food shortages.”

Severe drought has affected more than 60 per cent of the country’s provinces, he said, “but there is no single province not affected since some are facing serious or moderate drought.”

“If urgent measures are not taken, there will be a catastrophic humanitarian situation,” he said. “It is arguably the worst humanitarian crisis in the world at the moment, and the saddest part is that early action and prompt action could have prevented it from escalating.”

For many, conditions are already catastrophic.

“We have nothing,” said 45-year-old Juma Gul, one of the many people displaced by drought sitting in a Red Crescent mobile health clinic just outside the Badghis provincial capital of Qala-e-Now. With nine children and a husband unable to find work, her family was surviving on loans from shopkeepers. But even those have dried up, she said.

“Sometimes we find food and sometimes not. We eat only dry bread and green tea. We can’t buy flour or rice, it’s too expensive.”

In the village of Hachka outside Qala-e-Now, farmer Abdul Haqim surveyed his barren field, the icy wind sweeping across the fissures of cracked earth. It used to grow wheat and sustain his family of 18. Now, there is nothing.

“There is no rain, there is drought,” he said. Many people in his village, including three of his adult sons, have left for Iran and he’s considering sending a fourth, although the boy is only 12. It’s the only way his family can survive.

“My friend, people are leaving this region. Some people even leave their children (behind) and go,” he said.

Experts predict climate change will make droughts even more frequent and severe. They have been ringing the alarm bell over Afghanistan for years.

“Climate change in Afghanistan is not an uncertain, ‘potential’ future risk but a very real, present threat – whose impacts have already been felt by millions of farmers and pastoralists across the country,” said a 2016 report by the World Food Program, United Nations Environment Program and Afghanistan’s National Environmental Protection Agency. The current drought is the worst in decades.

“The effect of climate change and global warming in Afghanistan is very clear in multiple ways,” said Assem Mayar, a water resource management expert and PhD candidate at the University of Stuttgart. Over the last two decades, 14 per cent of the country’s glaciers have melted, he said, while the frequency of drought has doubled compared to the last decades of the 20th century.

Flood frequency and severity has also increased, while there has been a shift from snow in the early winter to rain in the spring. This disrupts the water balance in the country as snow, by its very nature, remains for longer than rainwater, which runs out of the country in two-to-14 days, Mayar explained. Afghanistan also lacks water reservoirs, which are 10 times smaller than those of neighboring countries.

The previous government drew up a drought risk management strategy, Mayar said, but with the change of government in August, everything has stopped.

Deputy Minister for Water Mujib ur Rahman Omar said at a news conference Wednesday that the government had a policy for managing the drought, including projects to build irrigation canals, dams and check dams — small, sometimes temporary dams in waterways — in Badghis province.

“Our technical and experienced colleagues are busy in this,” he said, adding that all projects depended on the availability of budgets.

The new deputy governor of Badghis, Taliban special forces fighter Mohibullah Asad, is well aware of the severity of the problem.

“The drought is obvious all over Afghanistan, and it has a greater negative impact on Badghis province,” he recently told the AP in the regional governor’s building in Qala-e-Now, flanked by an entourage of Taliban fighters.

Although drought has been a problem for years, he said, this year it was particularly severe, affecting about 80 to 85 per cent of the local population.

His administration was meeting frequently with aid organizations, Asad said, adding that the government itself had no funds to deal with the situation as the previous government had left nothing.

Mayar, the water management expert, said humanitarian investment should focus on small- and medium-scale water projects to reduce the effects of drought.

“The international community should not restrict climate and natural disaster-related funds due to sanctions,” he said. “Because climate change continues its effects on Afghanistan.”

Michele Pirro: “Ducati MotoE is in some ways reminiscent of MotoGP”