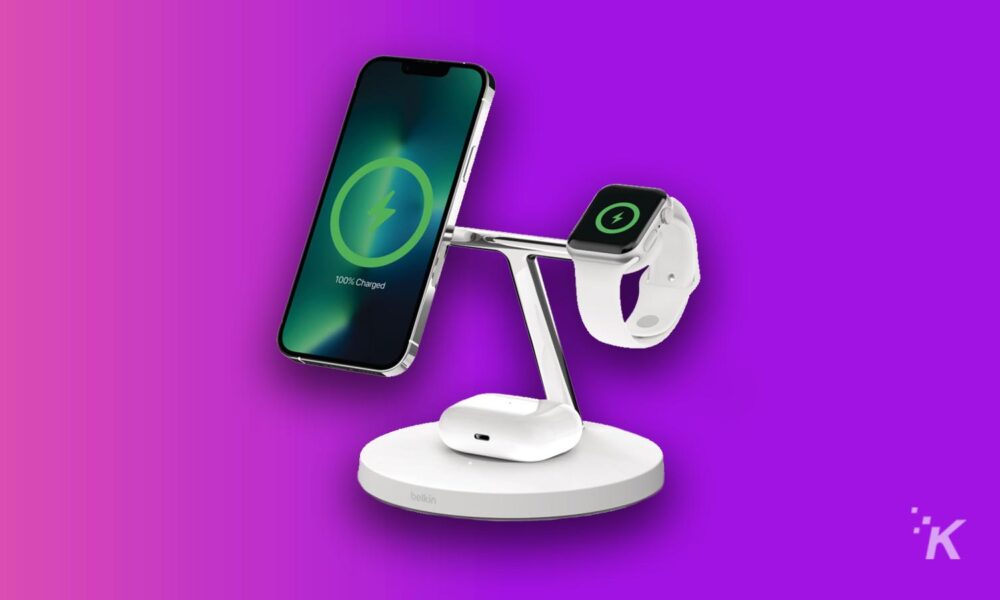 Belkin has added a new trick to its multi-device MagSafe charger – the ability to fast-charge the Apple Watch Series 7. The best part? There’s no change in price from the $149.99 price of the prior device.

That’s right, the BoostCharge Pro 3-in-1 wireless MagSafe charger can now charge at the same rate as Apple’s new, special Apple Watch Series 7 cable. That’s up to 80-percent from zero in 45 minutes in case you weren’t aware.

Belkin’s charger can still charge older Apple Watch models. It’ll do so at the normal, slower speed if so. You can also charge your iPhone 12 or iPhone 13 at 15W via wireless MagSafe, and your AirPods or AirPods Pro at 5W wirelessly.

The MagSafe pad for your iPhone has a non-slip design and can work with MagSafe cases of up to 3mm thick. You can mount your iPhone in Portrait or Landscape orientation. A 40W power supply unit is included.

The other cool thing about Belkin’s chargers is that you get a Connected Equipment Warranty of up to $2,500, and a two-year warranty on the charger and its included accessories.

You can get the updated $149.99 BoostCharge Pro 3-in-1 in Apple stores in the Americas and Asia now. Apple stores in EMEA and Australia / New Zealand get it in July, and so does Belkin’s own website (where you can preorder it). Retail stores will have stock “in the coming months.”

Have any thoughts on this? Let us know down below in the comments or carry the discussion over to our Twitter or Facebook.

Just a heads up, if you buy something through our links, we may get a small share of the sale. It’s one of the ways we keep the lights on here. Click here for more.

Maker, meme-r, and unabashed geek. Hardware guy here at KnowTechie, if it runs on electricity (or even if it doesn’t) I probably have one around here somewhere. My hobbies include photography, animation, and hoarding Reddit gold.

Create your own email domain workshop