Biden stumps for McAuliffe in early test of political clout 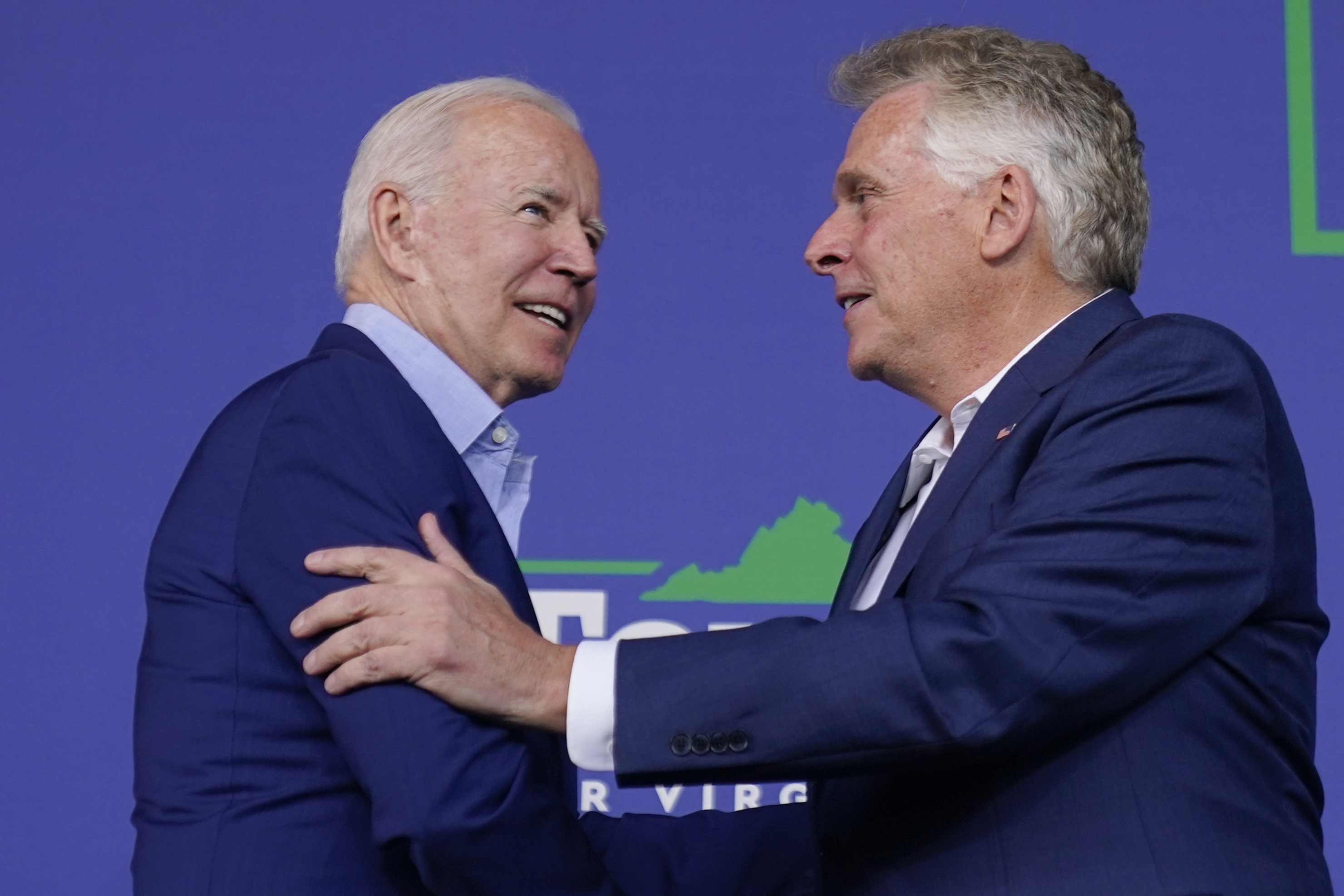 President Joe Biden led the kind of campaign rally that was impossible last year because of the pandemic, speaking before nearly 3,000 people in support of a fellow moderate Democrat whose race for Virginia governor could serve as a test of Biden’s own strength and coattails.

ARLINGTON, Va. (AP) — President Joe Biden led the kind of campaign rally that was impossible last year because of the pandemic, speaking before nearly 3,000 people in support of a fellow moderate Democrat whose race for Virginia governor could serve as a test of Biden’s own strength and coattails.

Biden motorcaded across the Potomac River Friday night to back Terry McAuliffe, a former governor looking for a second term whose centrist leanings in many ways mirror those of the president. The race is seen as an early measure of voters’ judgment on Democratic control of all branches of the federal government.

The president stood before an enthusiastic and largely unmasked crowd who gathered around a park pavilion and playground on a warm July night. He emphasized that he shared the same vision as McAuliffe about the need for greater public investments in order to drive economic growth. But Biden was also focused on the political stakes.

“You’re not gonna find anyone, I mean anyone, who knows how to get more done for Virginia than Terry,” Biden said. “Off-year election, the country’s looking. This is a big deal.”

Biden pointed to his management of the pandemic and highlighted the economic recovery during the first six months of his term, providing a window into his party’s messaging as it tries to maintain narrow margins next fall in both houses of Congress. He also highlighted the relative popularity of his $1.9 trillion COVID-19 relief bill and called for action on his infrastructure plan, much as he has done in official visits to congressional districts expected to see close races next year.

It was a clear return to politics as normal after 2020, when Biden had to speak to supporters who stayed in their cars at drive-in rallies or give remarks in front of sparse and socially distanced audiences. The rock songs and tightly packed people standing before center stage suggested that Democrats will not be waging campaigns via Zoom meetings and conference calls this year.

Protesters against an oil pipeline interrupted Biden and the president took a shot at his 2020 opponent as he told the crowd to not shout them down.

McAuliffe’s win in his state’s gubernatorial primary was one of a string of recent victories by self-styled pragmatic candidates in relatively low-turnout elections — which tend to draw the most loyal base voters — and his race is being carefully watched by Democrats looking to shape their messaging for next year.

“It’s an important test for the Biden administration. The margins are so small, and he needs to be able to use his clout to help candidates get across the finish line,” said Adrienne Elrod, a senior adviser to Hillary Clinton’s 2016 presidential campaign who also worked on Biden’s inaugural. “His message is simple: that he is delivering on promises on vaccines, record job growth and infrastructure.”

McAuliffe, who previously served as governor from 2014 to 2018, is facing Glenn Youngkin, a political newcomer who made a fortune in private equity. Despite the state trending blue over the last decade, the race is seen as competitive. As one of only two regularly scheduled governor’s races this year, is drawing outsize national attention as a potential measuring stick of voter sentiment ahead of the 2022 midterms.

Biden and McAuliffe profile similarly, as moderate Democrats who don’t necessarily electrify the party’s base but who won their primaries on a promise of electability. The Virginia race could serve as a checkup on Biden’s status, and the Democratic National Committee has pledged to spend $5 million to help McAuliffe’s campaign this year, a clear signal that the White House has prioritized the race.

Even as much of the Republican Party remains in the thrall of the Donald Trump, Youngkin has positioned himself as a more moderate Republican in a state Trump lost by 10 points in 2020. He has said he was “honored” by the former president’s endorsement of his campaign.

Democrats on Friday repeatedly tried to link Youngkin with Trump.

“I tell you what, the guy Terry is running against is an acolyte of Donald Trump, for real,” Biden said. “I don’t know where these guys come from.”

Biden has long been an eager campaigner on the road — and on the rope line — during his time as senator and vice president, and emerged as a successful surrogate in 2018 when Democrats won back control of the House.

But the COVID-19 pandemic eliminated campaigning for the bulk of the 2020 race, and the events that were held for the general election stretch run were socially distant and infrequent. As the pandemic receded this spring, Biden, always the most tactile of politicians, has reveled in interacting with people, spending an hour chatting with supporters at a recent Philadelphia event.

Aides said he was eager to do the same in Arlington on Friday. But privately, there was increased worry about the danger posed by the virus’s highly contagious delta variant.

Biden has pledged to work with Republicans and has spent enormous political energy on the bipartisan infrastructure deal. But he still went after the GOP on Friday, saying it “offers nothing more than fear, lies and broken promises.”

White House aides have pointed to polling that suggests Biden’s agenda is broadly popular with voters of both parties, even though it has received little support from GOP lawmakers in Washington. But Republican strategists cast doubt on whether Biden’s poll numbers would translate into votes.

While both Biden and McAuliffe have been active in Democratic politics for decades, they have relatively few direct political connections, though McAuliffe ran the state campaign for Biden in 2020. But their political and ideological similarities are extensive.

Virginia’s off-year elections have always been looked at as a sort of national bellwether, and “with the Democratic nominee being so philosophically close and similar to Biden, many may see Virginia as a stronger bellwether than usual,” said Mark Rozell, a political science professor at George Mason University.

Current Democratic Gov. Ralph Northam, like all Virginia governors, is prohibited from seeking a second consecutive term. The other notable off-year election in 2021, for New Jersey governor, is not expected to be competitive, with Democrats likely maintaining control.