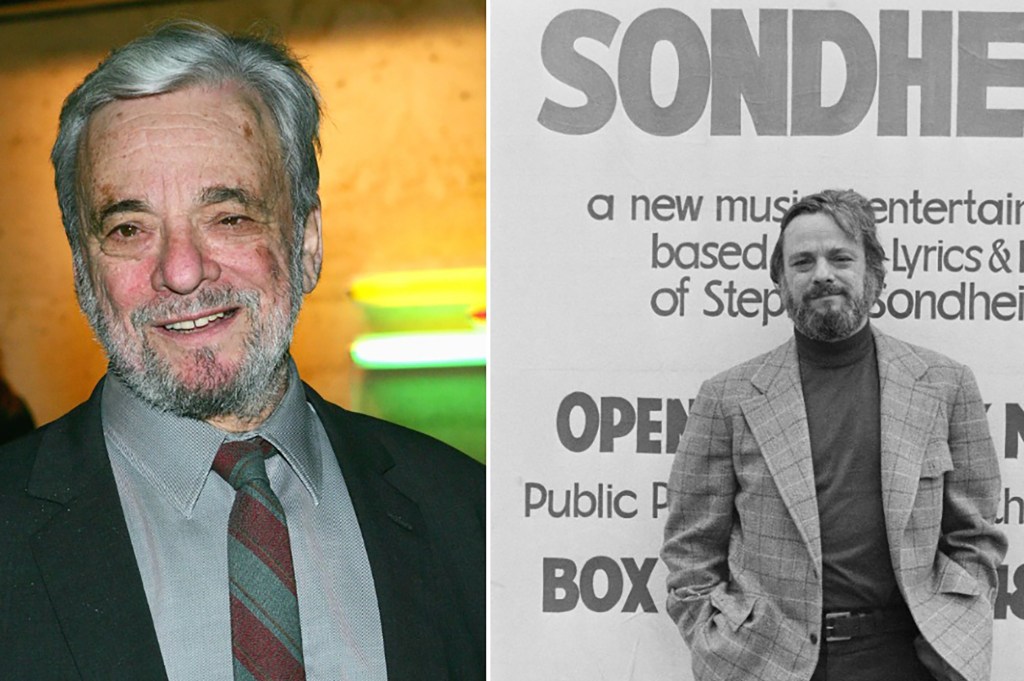 Broadway legend Stephen Sondheim, the most important man in musical theatre, died Friday at his Roxbury, Conn. home. He was 91.

The legendary “West Side Story” songwriter’s death was announced by F. Richard Pappas, who called it sudden, the New York Times reported. Pappas said Sondheim had celebrated Thanksgiving the day prior.

Beyond his achievements, which were great and many, he loved to laugh.

“I am the best laugher,” he told The Guardian in 2000. “If you write a comedy, hire me to sit in the audience. Although I tend to guffaw, which is not always great.”

Sir Cameron Mackintosh, notably the world’s most successful producer of musicals once described him as “possibly the greatest lyricist ever.” Frank Rich, who earned the nickname “The Butcher of Broadway” during his 14 years as the New York Times theatre critic, also once wrote, “He has changed the texture of the musical as radically as Oscar Hammerstein, and may yet leave our theatre profoundly altered.”

“I want people to enjoy what I write,” he told the London Telegraph in 2014. “I’m a product of Broadway, no matter how pretentious anybody thinks what I write is. I’m not writing for myself. I’m writing to entertain, to make people laugh and cry and think. I want as big an audience as possible.”

Broadway stars and other celebs flooded social media with tributes for the late artist on Friday.

“Miss Saigon” star Lea Salonga wrote, “Rest In Peace, Stephen Sondheim, and thank you for your vast contributions to musical theater. We shall be singing your songs forever. Oh, my heart hurts…”

“Wicked” actress Alice Fern tweeted, “Gosh. I’m sure we all knew this wasn’t far off but it still hits. You were a Titan and your work lives on sir. God bless ya Stephen Sondheim. Thank you #sondheim.”

“Stephen Sondheim was the best there ever was. I don’t know when we will ever have another of his caliber, of his breadth and scope. Just the greatest, a legend, a true titan. Rest In Peace,” Uzo Aduba added.

Ariana DeBose, star of Steven Spielberg’s upcoming “West Side Story” adaptation penned, “I am at a loss. Feels like the end of an era. He did indeed set the standard for the American musical. Rest well, sir. #StephenSondheim.”

“He wrote me a wonderful permission letter to use “Old Friends” in American Gods. I avoided meeting him (failed only once) and refused dinner because I didn’t have many heroes. Now I’ve got one less. Thank you Stephen Sondheim so much,” author Neil Gaiman said.

“Into The Woods” star Anna Kendrick tweeted, “I was just talking to someone a few nights ago about how much fun (and f–king difficult) it is to sing Stephen Sondheim. Performing his work has been among the greatest privileges of my career. A devastating loss.”

“Rest In Peace Stephen Sondheim. You gave us something new. You changed the game. I was so lucky,” actor Mario Cantone added.

The world-renowned lyricist and composer scored nine Tony Award nominations throughout his extensive career, alongside an Academy Award, eight Grammy Awards, a Pulitzer Prize and a Laurence Olivier Award.

The first Broadway show that Sondheim composed both the lyrics and music for proved to be a winner out the gate. He scored a Tony Award for best musical for that show, 1962 comedy “A Funny Thing Happened on the Way to the Forum,” which ran for more than two years.

In addition to his many wins, Sondheim racked up scores of Tony nominations starting with Best Musical nods for 1958’s “West Side Story” and 1960’s “Gypsy.”

The composer won multiple Grammys for musical cast show album and won song of the year in 1975 for “Send in the Clowns.”

He also won Pulitzer Prize for Drama for “Sunday in the Park with George” in 1985. Over 20 years later, in 2015, he was awarded the Presidential Medal of Freedom by then-president Barack Obama at the White House.

Sondheim’s body of work earned him an award at the Kennedy Center Honors in 1993.

Aside from working on the musical theater stage, the New York native took his talent to the big screen. He wrote music for films, which included the score for the 1974 film “Stavisky.” Warren Beatty’s 1991 comedy “Dick Tracy” included Sondheim’s tune “Sooner or Later (I Always Get My Man)” and even won the Academy Award.

In 2020, Sondheim suffered a fall that left him unable to attend the opening of his namesake theater in London’s West End.

“As I recover from my tumble, I’m impatient to throw away my cane, grab my hat and head across the Pond as soon as I can to see on which cherub Cameron has tattooed my initials,” Sondheim said in a statement at the time. “I am, to put it mildly, chuffed to have my name on a theatre in the West End I have loved visiting ever since my first trip to London almost seventy years ago.”

While he was “in feisty frustrated spirit” after the fall, according to producer Cameron Mackintosh, it didn’t stop the party for his 90th birthday, which was held virtually in April, attended by the likes of Meryl Streep.

“You can’t believe that one man wrote all of this,” Broadway leading man Raul Esparza told The Post in 2020, celebrating a career that began with the lyrics to 1957’s “West Side Story” and grew monumentally since. “It’s like looking at the Sistine Chapel. Steve would kill me for talking about him like this!”

Sondheim ruled the theater during the 25-year period, from 1970 to 1995, as the driving creative force in the American theater. While he was in his 20s, he wrote “Somewhere” from “West Side Story” and “Rose’s Turn,” as well as the closing number of Golden Age musicals, “Gypsy.”

Most recently, three film awards contenders featured his music: “Knives Out,” “Joker” and “Marriage Story.” The latter included a poignant scene in which Adam Driver sings Sondheim’s “Being Alive,” from the 1970 show “Company.”

‘Digital Wellbeing will soon show your screen time in…

Ready To Restart The Race: Phil Keoghan Talks About The…

Confused Replika AI users are trying to bang the algorithm

Ready To Restart The Race: Phil Keoghan Talks About The…

Phil Keoghan Talks About The Return Of ‘The Amazing Race’…

Phil Keoghan Talks About The Return Of ‘The Amazing Race’…