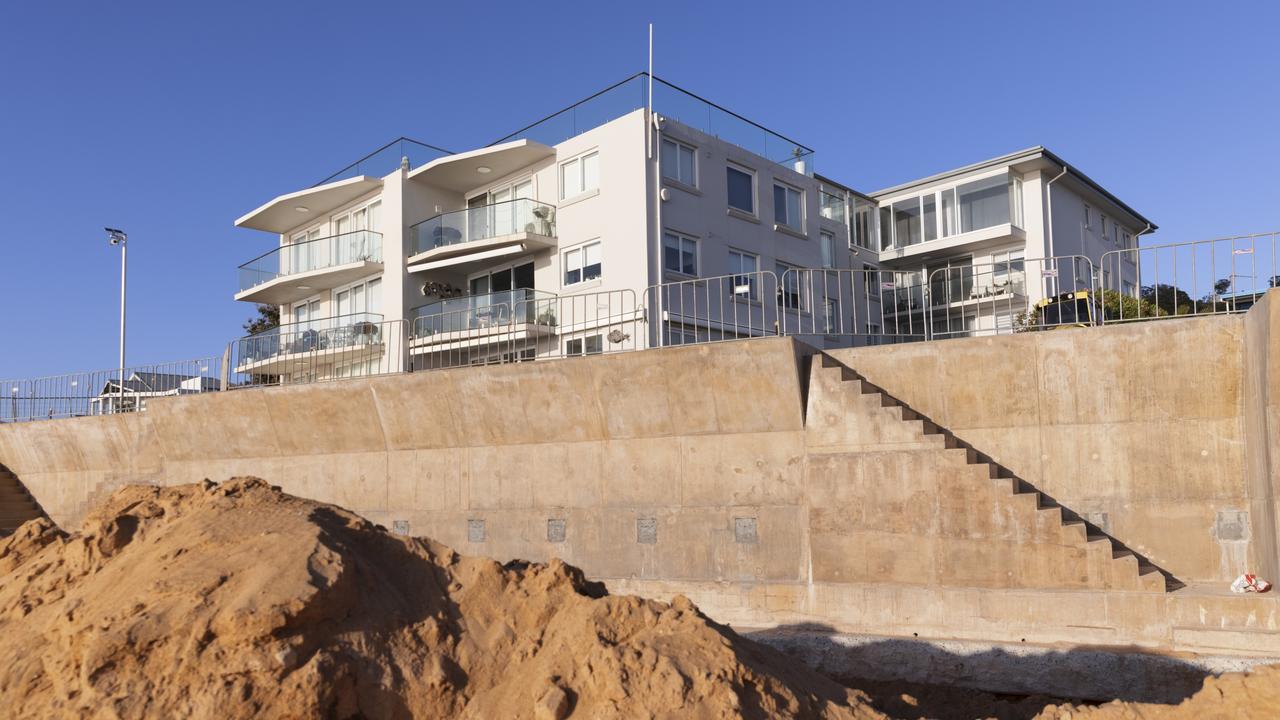 A seven-metre high wall erected to protect beachside mansions from being washed away has sparked debate among locals in a wealthy Sydney suburb.

A seven-metre high wall erected to protect beachside mansions from being washed away has sparked debate among locals in a wealthy Sydney suburb.

Five years ago, residents along Collaroy Beach watched helplessly as enormous waves smashed into their backyards, collapsing pools and patios of their multimillion-dollar waterfront properties.

Two further storms have hit the beach since 2016.

In response, homeowners along the most exposed strip have come together to finance a massive sea wall, with 10 residents each forking out $300,000 for the construction of the sheer concrete structure, designed and built by Horton Coastal Engineering.

Other sections of the wall will have to be approved and financed separately by each affected group of residents – divided into roughly six groups – with the NSW government agreeing to chip in 20 per cent of the cost and residents paying 80 per cent.

When complete, the wall will stretch for 1.3km from Collaroy to South Narrabeen.

“We really didn’t want to build a wall,” resident Bob Orth told The Guardian on Sunday.

“We didn’t want to put up $300,000. But we had to build a wall and we’ve done it strictly by the book. Without the wall built here, we’d be ripped into with the next storm. I haven’t got a doubt in the world [that it will work], and no one has any doubts along here. The owners are very happy with the solution.”

But other residents are not happy.

Brendan Donohoe from the Surfrider Foundation environmental group, which has been fighting against the construction of a seawall for three decades, told The Guardian that the council was sacrificing the beach to protect private property.

He feared the artificial structure would interrupt the natural, dynamic processes of sand movement, which could also drive erosion.

“Ultimately these properties are probably unprotectable,” he said. “Our beach is the thing we should be trying to insure – not in the monetary sense but in the sense of its continued existence.”

Coastal engineer Angus Gordon described it as a “brutal engineering solution” and argued a rock revetment would have been more fitting.

But the Northern Beaches Council rejected the criticism, telling the outlet that the design had been reviewed by a Danish coastal engineer, the Manly Hydraulics Laboratory and a team from the University of NSW.