Drums Up Guns Down rally promotes peace in East Knoxville 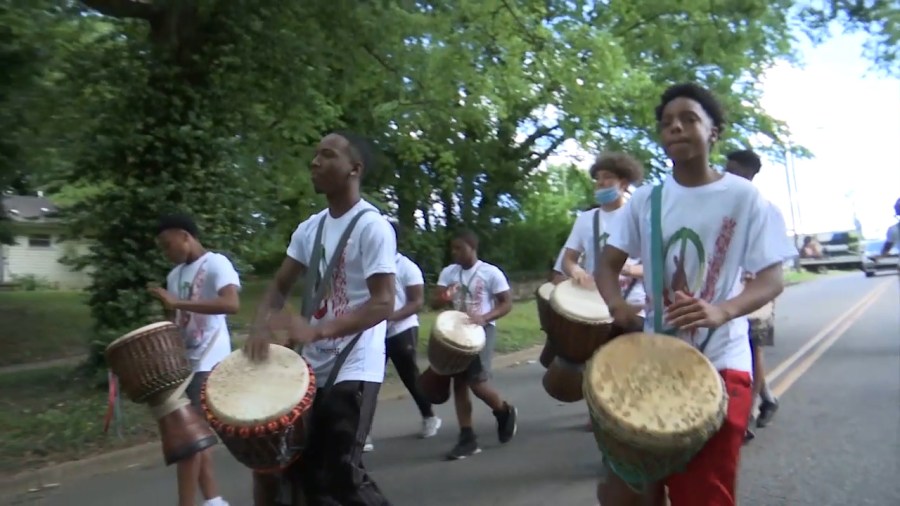 The event was put on by the organization Drums Up Guns Down, which was started last year when five students died from gun violence.

Obayana Ajanaku, the founder of the organization said, ”last year it was back-to-back to back-to-back I can’t say it’s totally stopped but it’s slowed down a little bit.”

The shock of losing that many young people in such a short time led Ajanaku to do something for his community.

He said he wanted to give students an avenue to take their minds off of violence.

“Really focus on keeping these kids busy and occupied. Teach them how to deal with their emotions and how to draw them and how to dance.”

Over the past year, the organization has grown. Several dozen students participate in the program.

“Last year at this very time, last week would’ve been a year anniversary of when we did this march. So that says a lot and inspired me to hit the ground running and we haven’t stopped since,” Ajanaku said. ”Friday’s rally was focused on lifting the community.”

“It’s called the pro-peace rally,” Ajanaku stated. “Pro peace in the streets so our theme is pro-peace 365 and we’re battling gun violence but I want to use pro-peace as a replacement, so we don’t even have to use the word violence.”

Students at Austin East are still mourning the deaths of several of their classmates but are trying to move forward.

Quinton Calhoun, a Freshman at Austin-East said,  “it’s been just very tough you know you don’t know if anything else might happen. We’ve been kind of scared but we’re just trying to keep ourselves safe and everything will be all right.”

However, it’s organizations like Drums Up, Guns Down that is giving students a chance to march to the beat of their own drum, in a peaceful way, and combat gun violence with positive reinforcement.

Organizers of this rally also invited groups to give kids the opportunity to sign up for various summer programs and jobs to keep them busy once school is out.

For more information on Drums Up Guns Down, you can click here.

Lunar Eclipse Visible Across US This Weekend – NBC Chicago