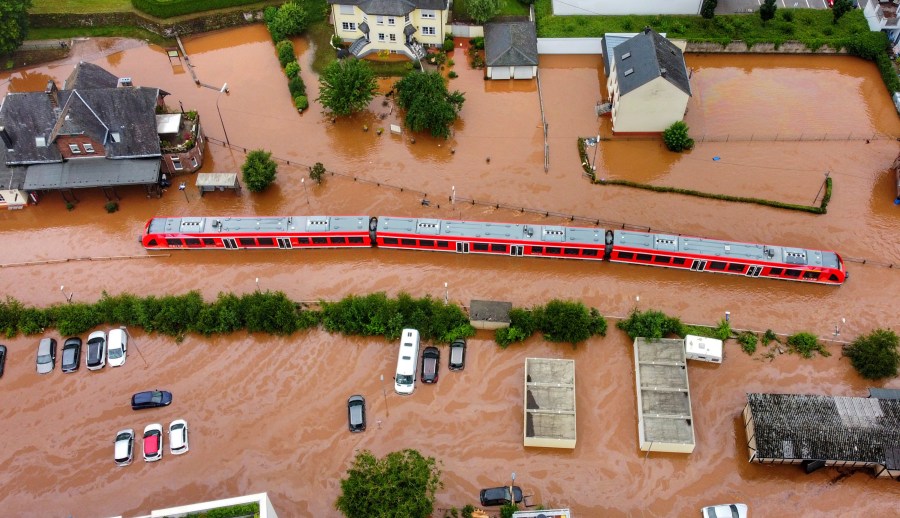 BERLIN (AP) — Germany’s national railway operator estimated on Friday that last week’s flooding caused damage worth 1.3 billion euros ($1.5 billion) to its network, offering another glimpse of the extent of the devastation.

Authorities are still working to determine the overall cost of the floods that did their worst damage in western Germany and eastern Belgium. German Chancellor Angela Merkel said this week that the damage is “immense” and will take a long time to repair.

At least 180 people died in Germany in the flooding and a further 31 deaths were reported in Belgium, taking the overall death toll to 211.

“Never before has our infrastructure been destroyed to this extent in one go,” said Volker Hentschel, a board member at the company’s DB Netz infrastructure division. He said its initial estimate is that the flooding caused damage to the railway network and stations of around 1.3 billion euros.

The government, which owns Deutsche Bahn, has vowed to make a quick start on rebuilding efforts. Hentschel said it will take “months, if not years” to restore everything, though the company is confident of repairing 80% of the damaged infrastructure by the end of this year.

Germany’s national weather service, DWD, says that localized storms are likely in parts of the flood-affected regions on Saturday, but in most cases aren’t expected to produce the quantities of rain that would warrant a warning.

Separately, Turkey also has seen flooding in recent days. Work was continuing Friday to find a missing person following floods in Artvin province in the country’s northeast that started Wednesday, and one person was being treated for injuries. More than 450 people were evacuated.

At least six people were killed last week and two were missing after floods in neighboring Rize province.