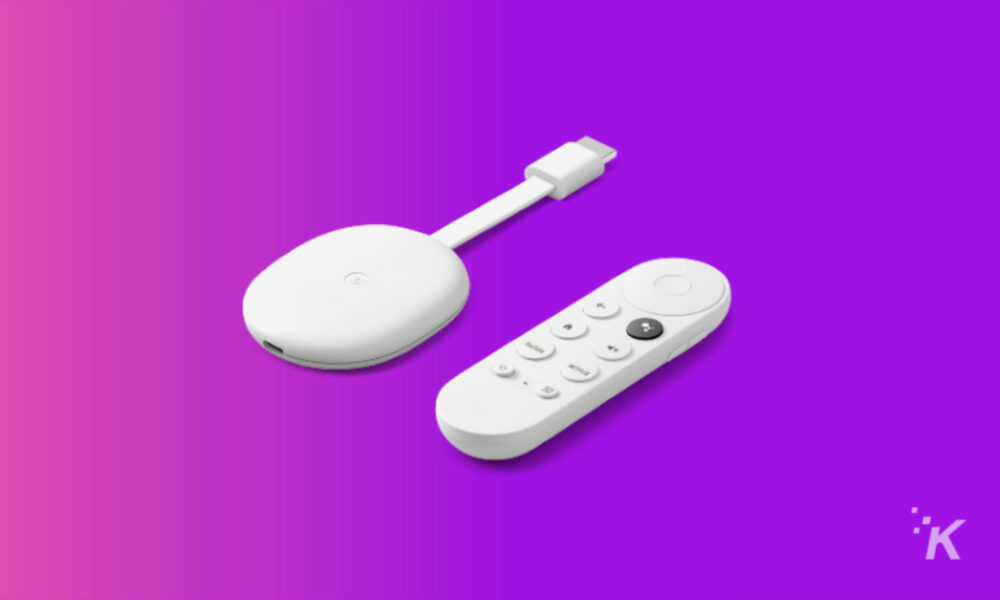 The tiny Chromecast dongle looks the same as the $50 4K version. That’s a white oval with a short HDMI cable, so it hangs off your TV.

The remote control is the same, too, with a Google Assistant button for voice control and buttons for navigating around the UI. You also get volume buttons on the side.

That lower price tag of the new Chromecast does mean you lose 4K support, however. Even so, it does still have HDR, which is nice.

The new device supports every streaming service you’d expect, from Netflix, Disney+, Apple TV+, and more. Much more, actually, with over ten thousand apps on the Google TV platform.

You can also use it to stream games, with Stadia support and the ability to connect a controller via Bluetooth.

The new Chromecast with Google TV (HD) can also be grouped with Nest speakers. That gives you multi-room playback from your favorite music streaming services.

The best part about this is that these apps are native. No more needing to cast content from your mobile device.

Google aims this device at the sizable number of TV watchers still on 1080p screens. It’s also perfect to add smarts and streaming to your PC monitor, so you can have something to do without doomscrolling social media in your downtime.

You can buy the Google Chromecast with Google TV (HD) from Amazon, the Google Store, and other retailers for $30.

Just a heads up, if you buy something through our links, we may get a small share of the sale. It’s one of the ways we keep the lights on here. Click here for more.

Maker, meme-r, and unabashed geek. Hardware guy here at KnowTechie, if it runs on electricity (or even if it doesn’t) I probably have one around here somewhere. My hobbies include photography, animation, and hoarding Reddit gold.