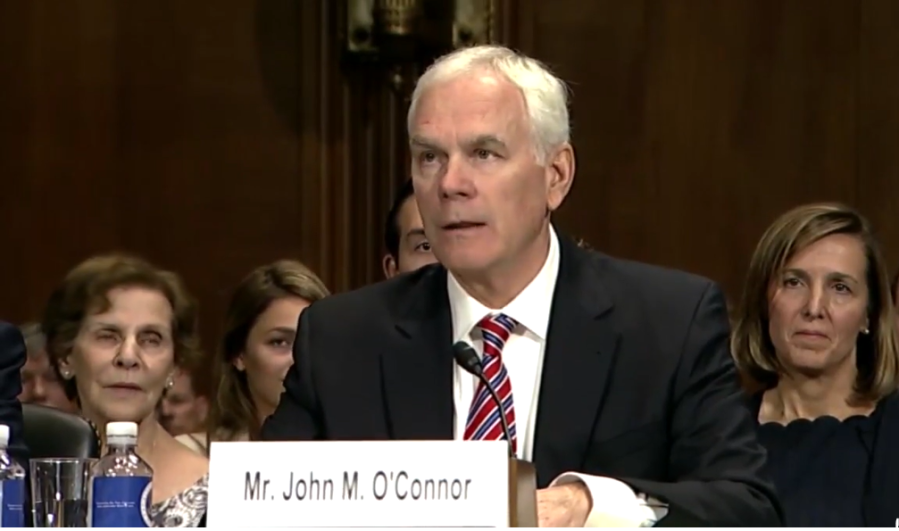 OKLAHOMA CITY (KFOR) – Governor Kevin Stitt announced today he has appointed John O’Connor to serve as the Attorney General for the State of Oklahoma.

“I am excited to appoint John O’Connor to serve as Oklahoma’s attorney general,” said Governor Stitt. “John is the right leader for this moment. As an attorney, John is known amongst his peers to be of the highest competence and integrity, receiving the highest possible ethical and legal ratings during his 40 years of practice. More importantly, John is a man of high moral character who will do the right things for the right reasons – not for personal gain. I have the utmost confidence in him to uphold the law and fight for all 4 million Oklahomans.”

Former Attorney General Mike Hunter announced back in May that he would be resigning on June 1, citing personal reasons.

KFOR has learned those reasons involve his divorce and an extra-marital affair.

In a statement, Hunter said, “It has been a distinct and absolute privilege of a lifetime to serve as the state’s attorney general. Regrettably, certain personal matters that are becoming public will become a distraction for this office. The office of attorney general is one of the most important positions in state government. I cannot allow a personal issue to overshadow the vital work the attorneys, agents and support staff do on behalf of Oklahomans.”

In a statement, the governor wished Hunter and his family the best.

“I respect his decision to do what he thinks is best for his office and the state of Oklahoma. I know he is going through a difficult time, and I wish him, his family, and the employees of his office well.”

“I am humbled and honored to have been selected by Governor Stitt to serve 4 million Oklahomans as attorney general protecting their interests and the State of Oklahoma,” said O’Connor. “There is much work to be done and I look forward to bringing my experience to the office in service to the good people of Oklahoma.”

In 2018, President Donald Trump nominated O’Connor to serve as a United States District Judge for the Northern and Eastern Districts of Oklahoma.

However, the American Bar Association unanimously voted O’Connor as not qualified for the position, saying his judgement was found to be deficient.

“The confidential peer review revealed several instances of ethical concerns, including candor with the court, evidence of overbilling of clients and billing practices criticized by courts, an improper ex parte communication with a court, and improper contact with adverse parties in litigation,” the judgement states.

KFOR reached out to the Bar Association and they said they would not have a comment on his being named AG in Oklahoma.

DELAYED: Air Force Thunderbirds to fly over Round Rock, salute of frontline responders

MediaTek Dimensity 1050 Takes Aim At The US mmWave 5G…

MediaTek Dimensity 1050 Takes Aim At The…