Hasan Minhaj on ‘The Morning Show,’ and his new comedy tour 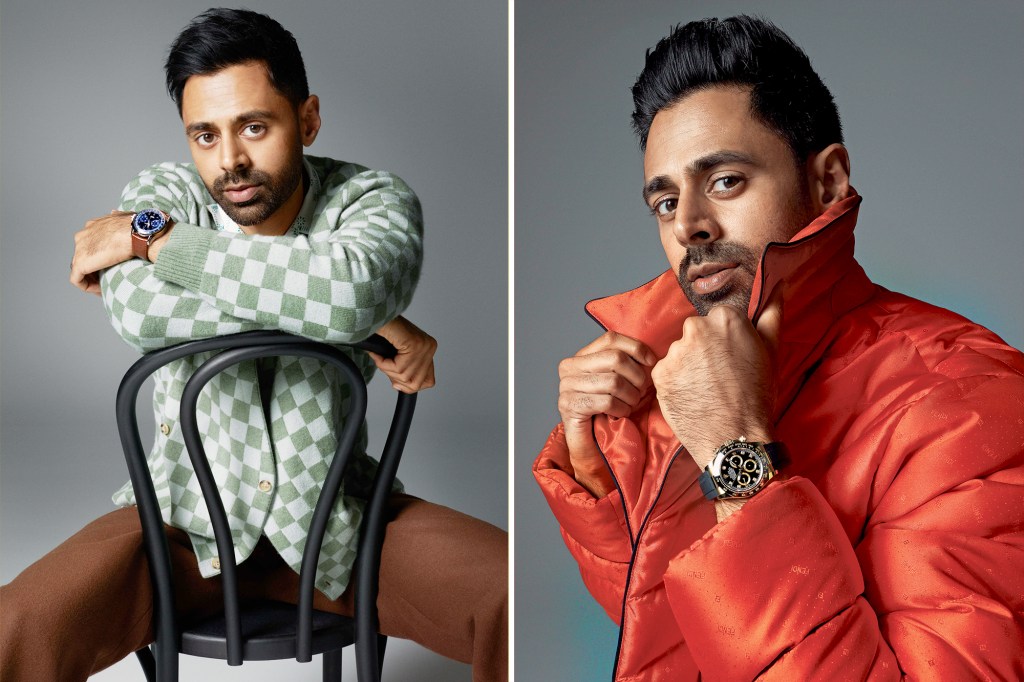 Hasan Minhaj is wondering how far he’s willing to take a joke. “When I first started out, I wanted to be the Tupac of comedy,” says the Indian American comic on our Zoom interview. “I’ll say whatever I want, I’ll do whatever I want.”

Then, the former “Daily Show” correspondent and “Patriot Act” host had kids. “Now that I’m a father, other people have to live with the consequences of what I’m saying. I’m not just speaking on behalf of myself — I’m part of a collective.”

Minhaj is happy to be home in Connecticut with his collective, at least briefly. He’s been busy playing a news anchor in the current season of Apple TV+’s Jennifer Aniston-Reese Witherspoon dramedy “The Morning Show.” He created a new one-man show, which just opened and will tour until next March. He’s voicing a supervillain in the new “Batman Unburied” podcast from “The Dark Knight” screenwriter David S. Goyer.

Oh, and he and his wife, Beena Patel Minhaj, the executive director of a health-care foundation, welcomed their son last year — just as the pandemic hit NYC.

“It was truly wild,” says the 36-year-old. The family was in Manhattan, and his then-2-year-old daughter found it hard to follow the city’s COVID protocols. “She hugs everybody, and licks elevator buttons, and when we go to a bodega she’ll, like, go behind the counter and grab the bodega cat. None of that was cool in April of 2020!”

Minhaj is now incorporating a tricky part of his fatherhood journey into the new live show, “The King’s Jester.” He teased a bit of this material with Jimmy Fallon on “The Tonight Show” recently, leading with a joke about thinking of adopting a white baby “just to flex on these motherf–kers. Just to show people we really made it in this country.” But the underlying story was no joke, he says: He struggled with fertility challenges and underwent varicocele repair surgery.

“Fertility is framed as a women’s issue — men aren’t seen as a part of that partnership,” Minhaj says. “For years I was having this low back pain and I didn’t know what it was. I partly blame my high school sex-ed teacher. They make you so terrified of that region of your body — like your genitals are radioactive!” His wife has given him the green light to go public about his struggles. “I hope, on some level, it lets other guys know that we can talk about this.”

The drive to speak truth to power has fueled much of Minhaj’s career, from his four years as a “Daily Show” correspondent, to hosting the 2017 White House Correspondents’ Dinner, to his Peabody-winning Netflix special “Homecoming King” and Netflix series, “Patriot Act With Hasan Minhaj.” The latter saw him tackling a single topical subject each episode, on a set one reviewer dubbed a TED Talk crossed with “Blade Runner.” His Saudi Arabia episode, which skewered Saudi Crown Prince Mohammed bin Salman, was banned in that country.

So it’s an interesting turn to see him on “The Morning Show” as Eric, a coiffed and composed co-host (to Witherspoon’s Bradley Jackson) who plays his ambitions close to the vest. “I think Eric understands the game,” he explains. “Bradley comes in and she’s a firecracker, she’s entitled — how would someone like Eric move like a gangster around her? That’s kind of what shaped the choices I made.”

As for why he wanted to be part of the series? “It is a very relevant show. It is poppin’. And for a long time America deemed Muslims culturally irrelevant,” he says. “So I’m making my community proud. That means a lot. I want to be part of projects like that, that I didn’t think were possible.”

This is a subject he’s chewed over at great length with Riz Ahmed, the British actor and musician who has become a close friend over the past several years.

“We’re both children of immigrants; both of our parents speak our native tongue and have accents, and were hard-working first generation. He’s part of the diaspora in the UK of Desi Muslims. I’m part of that diaspora here in the US. That connection is really deep. We saw our stories in each other.”

One of their shared goals is “taking our story from the margins to the mainstream,” he says. “Any opportunity I get to do that, to be considered top-shelf liquor, I wanna be a part of that.”

To that end, he’s also playing the Riddler in a new Spotify podcast, opposite Winston Duke (“Black Panther”) as Batman. “I want to do those things that stretch my mind, and make 15-year-old Hasan feel like, ‘Whoa, I didn’t know that was possible.’ To stand on the big stages and take up space. And hopefully bring my family along to see it.”

He really does bring his parents to tapings and sets as often as he can, because, he says, they still tend not to believe his American reality is real. “I see this look on my dad’s face all the time, like, ‘I didn’t know this was conceivable,’ ” says Minhaj, who was raised in Davis, Calif.

“My mom said something really sad but beautiful to me,” he adds. “We were on set and some [assistant] came up, a young blond woman, and she said, ‘Do you want coffee? I can go get it.’ And I said, ‘Yeah, I’d love an iced coffee. Mom, what would you like?’ And my mom felt kind of shy about getting a cappuccino. As the girl walked away, my mom said, ‘I can’t believe a white person is running to get you coffee.’ The thing that made me sad was, like, Mom, you’re a doctor! You’ve been working at that VA for 20-plus years. You also deserve somebody to, perhaps, go get you coffee.”

One of Minhaj’s favorite looks in the shoot should please his father: “It’s this amazing Gucci suit that looks like the one my dad got married in. It was rad.” The pieces also dovetailed with a recent personal mission: “As a person with melanin, I’ve gotta embrace colors more,” he says. “The shoot had these amazing reds and browns and tans and greens. It was really lovely.”

As with many things Minhaj is thinking about right now, fashion has become about navigating “the grays,” as he puts it. There are two sides to almost everything. “I want to get a ’fit off for the ’Gram, but I also am acutely aware of the damage it’s doing to the world,” he says. He explored the toxic perils of fast fashion in an episode of “Patriot Act,” which has shaped the way he looks at curating his own wardrobe.

“The thing I’ve been trying to advocate for is, buy quality pieces that will last a really long time,” Minhaj says. “I am also totally down to borrow clothes. I love that. I’ll borrow it and then send it right back. That has always been the happiest medium for me.”

Being part of a sharing industry feeds into another cultural development he’s been mulling, trying to come up with just the right way to add it into “The King’s Jester” while he’s touring.

“I don’t have the wording just right yet for my show, but perhaps America’s favorite pronoun is ‘me,’ ” he says. “I’m a hybrid kid — I grew up Indian and American. There’s very much a collective in Indian culture. And I love the individual freedom here! I got to explore things like sexuality, how I express myself, how I dress. That’s really cool. But I think one thing we’ve lost sight of here is a collective ‘we,’ and it bums me out a little bit.”

Still, he says, “I’ve chosen to be an angry optimist. It gives me something to fight for.”

Read an e-version of the new 16-page Home supplement in The News, Portsmouth