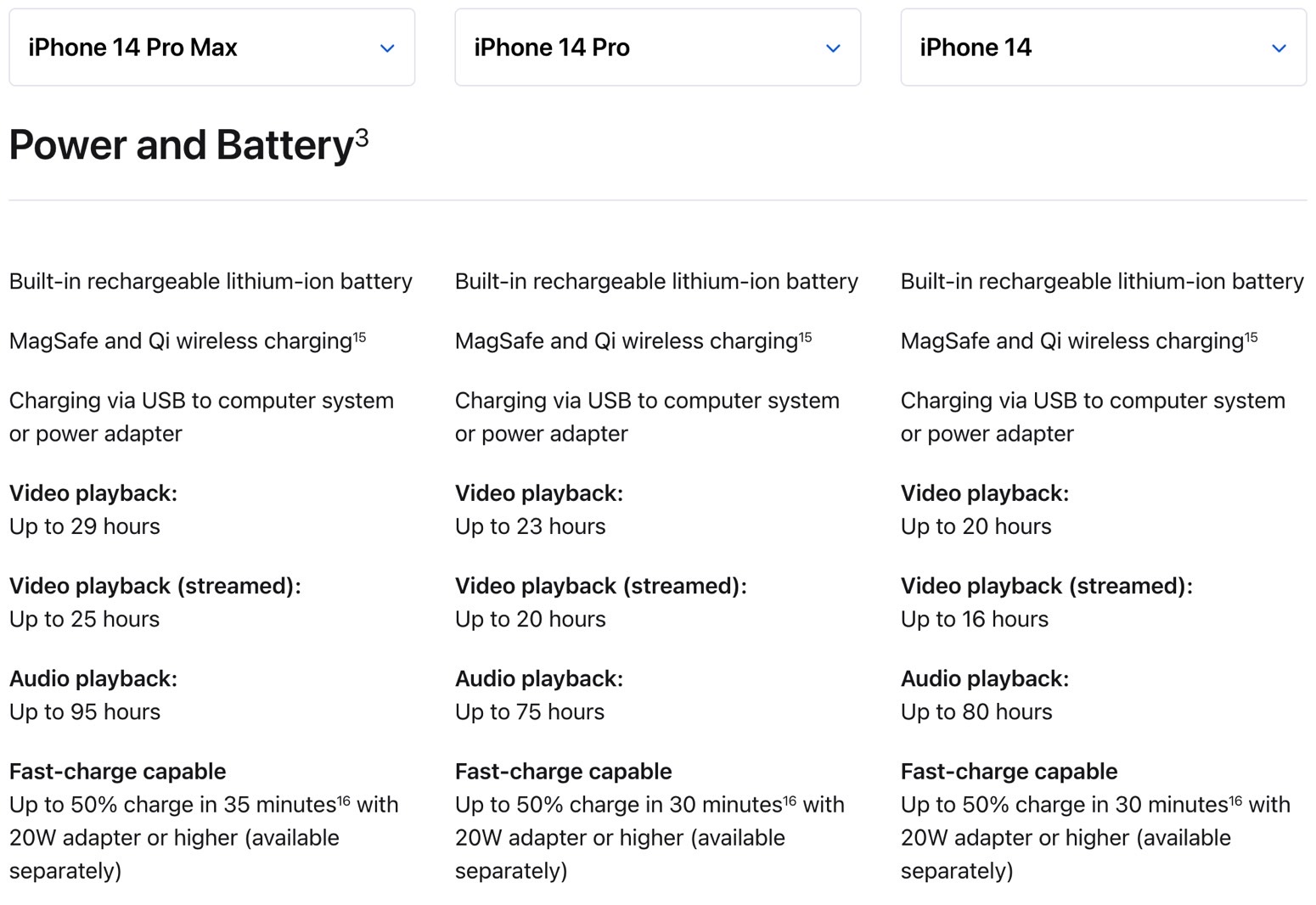 The iPhone 14 models do not ship with a charger in the box, just like their predecessors. The idea here is that most people probably already own at least one charger that can recharge the handset. Any charger works, including the 5W model that shipped with iPhones for years.

However, the iPhone 14 series supports 20W fast charging, a feature available since the iPhone 8/X series. You’re good to go if you have a USB-C charger that supports at least 20W. The phone will get to 50% capacity in about 30 minutes. That’s great for replenishing the battery quickly in a pinch, although the iPhone’s battery charging speeds pale in comparison to some Android handsets.

However, just like the iPhone 13 Pro Max, the iPhone 14 Pro Max supports faster charging speeds than what Apple advertises.

A recent discovery from Chongdiantou showed that the iPhone 14 Pro Max will go up to 29W if you use the Apple charger that ships with the 12-inch MacBook.

All other chargers capable of speeds above 20W will get you an average charging rate of 25W to 27W. Practically any USB-C charger that supports speeds of at least 30W will pull it off, not just Apple’s original chargers.

That also means any MacBook charger you might own can recharge the iPhone 14 Pro Max at speeds exceeding 20W. You will still need a USB-C to Lightning cable that ships with the iPhone to do it.

The video below from ChargerLab demos the iPhone 14 Pro Max’s faster charging speeds. The iPhone 14 Pro offers a similar performance, according to a different blog post from Chongdiantou. But the speeds go up to an average of 25W for the regular Pro model.

Ultimately, you’re only looking at marginal speed gains here. And peak charging times will not last for the entire life of the phone. But they might come in handy during battery emergencies when you’re really running low on power.

Also, if you’re charging the iPhone 14 Pro Max overnight with a wired or wireless charger, and have Optimized Battery Charging enabled, then the speed doesn’t really matter. You have all night long to recharge, and the process will stop at 80%. It’ll then resume before you wake up in the morning.

Come to think of it, slower speed rates might be better for the battery’s health, especially if combined with optimized charging.

Finally, there are plenty of other tips and tricks to boost the battery life on the iPhone 14 and ensure you don’t need a faster charger.

“Destiny Played Its Game When I Went Back Home”