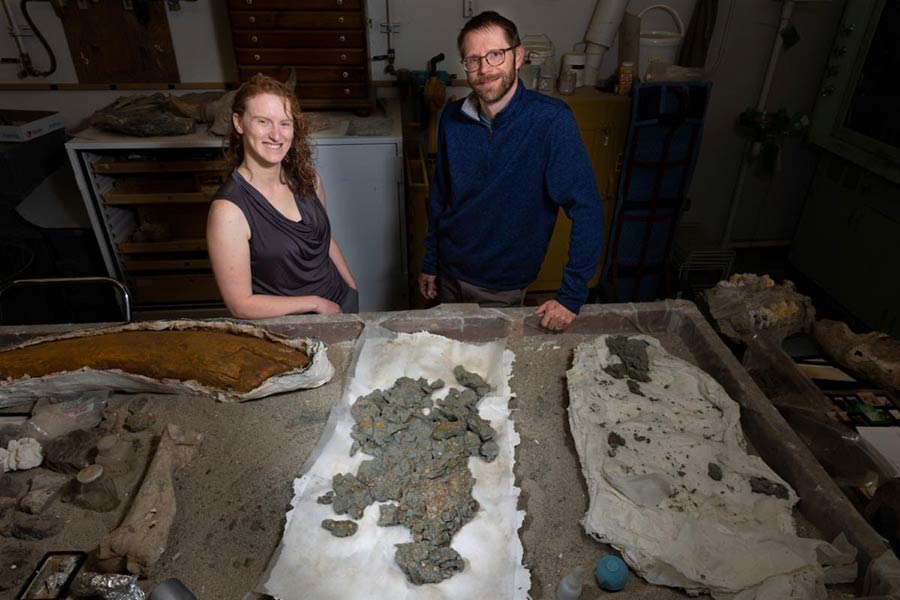 The following is a news release from Idaho State University.

POCATELLO – When it comes to fossils, finding any kind of eggs is like striking gold. So when paleontologists find prehistoric turtle eggs, it’s like they’ve found a diamond. Now, an Idaho State University student and a professor are detailing their jewel of a discovery in a new paper.

Recently, Ashley Ferguson, ISU geosciences doctoral candidate, and Dr. Leif Tapanila, geosciences professor and director of the Idaho Museum of Natural History, published their findings on a clutch of 74 million-year-old turtle eggs in the journal Cretaceous Research. The eggs were originally found in the Grand Staircase-Escalante National Monument in Utah by Dr. Tapanila and colleague Dr. Eric Roberts in 2009 while they were prospecting the area for potential fossil sites.

“We saw eggshell fragments covering a hillslope, and we could trace it back to a layer underground,” said Tapanila. “As you can imagine, eggs are really delicate, so finding a well-preserved clutch is rare.”

Fast forward to 2017, and after monitoring the spot to see if Mother Nature would reveal more of the eggs, Ferguson took the eggs on for her research.

“I became really interested in researching eggs during my Master’s studies when I learned about the unique ways some dinosaurs made their nests,” said Ferguson. “Oviraptors, for example, arrange their eggs into a donut shape, with the adult sitting in the center. It made me really curious to learn more about nesting strategies and how eggs and nest structures evolved over time.”

Over the course of two years, Ferguson worked to excavate the eggs, even utilizing a Bureau of Land Management helicopter to fly the block of rock holding the eggs to a waiting pickup truck. Once the eggs were back in Pocatello, she worked at exposing the eggshells using hand tools like dental picks and chisels. Using an electron microscope, she scanned a thin section of the egg and made a big discovery.

“Our scan showed us the eggs have a lot of unique features and might be a new type of turtle egg,” Ferguson said.

“Paleontologists like to name everything – including fossilized turtle eggs,” said Tapanila. “Because they could be a new species, their name is Testudoolithus tuberi.”

Ferguson also found the pieces of broken eggs were strewn across the whole specimen and something unexpected. Like a detective working a crime scene, Ferguson has been able to put together what may have happened eons ago.

“The eggshells being so spread out is unusual for eggs that hatched since the broken eggs would have stayed in the nest chamber,” Ferguson explained. “It makes sense that predators would eat nests fairly often and we found tyrannosaur teeth with the eggs so it’s entirely possible that a small tyrannosaur dug them up for an easy meal.”

Looking ahead, Ferguson hopes to return to the area where the eggs were found.

“I would like to build on this research and continue to search this part of Grand Staircase-Escalante National Monument,” Ferguson said. “We have found fragments of shell that look like the turtle shell, so there may be more clutches out there to find.”

For more information on the ISU Department of Geosciences and Idaho Museum of Natural History, visit isu.edu/geosciences and isu.edu/imnh.

Create your own email domain workshop