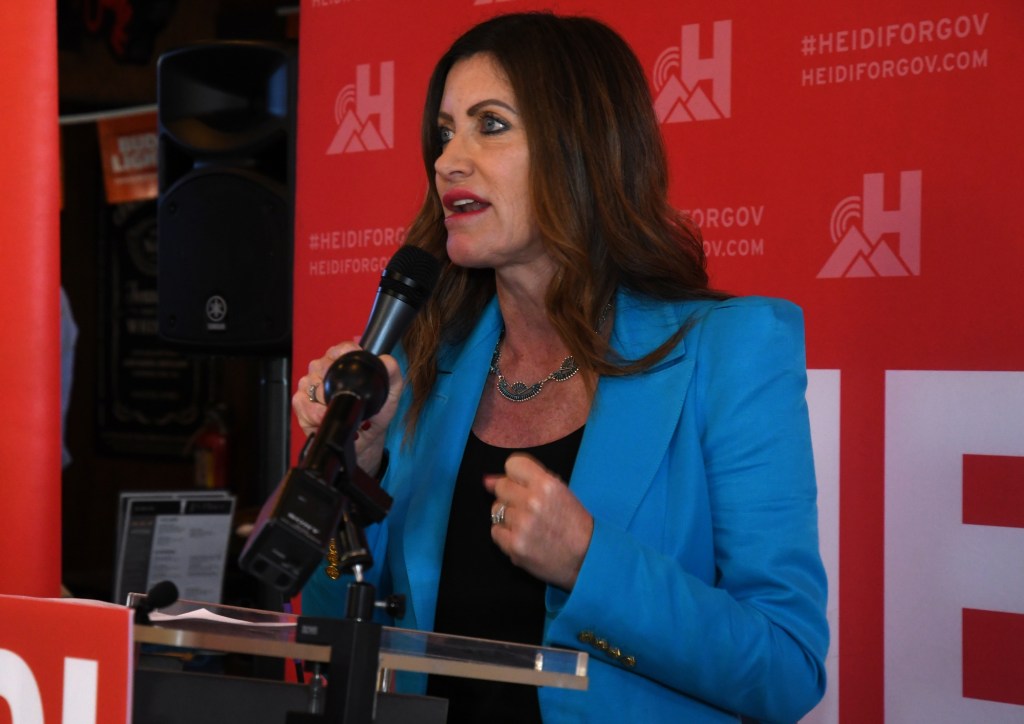 Gov. Jared Polis and University of Colorado Regent Heidi Ganahl faced off in Pueblo for the first time Wednesday, and the Republican challenger came out swinging while the Democratic incumbent pushed his record.

The debate comes as a recent poll, commissioned by FOX31, found Polis with a 17 percentage point lead over Ganahl. The challenger has also suffered from lackluster fundraising, especially when her opponent is a self-funding centimillionaire.

But it’s also against a backdrop of Democratic control over the state government, with Republicans hoping voters will bounce Colorado back to its purple reputation from a decade ago.

Here are some of the top takeaways from the debate, hosted by the Greater Pueblo Chamber of Commerce.

The debate began simple enough: Was Polis’ record a good or bad thing?

Ganahl implored Coloradans to “hold him accountable” for an oil and gas industry that’s not as booming as it once was, rising crime and an epidemic of drug use.

“When people ask me what I’m going to do as governor, I say I’m going to undo a lot of the damage that has been done,” Ganahl said.

Polis, meanwhile, highlighted kept promises: providing full-day kindergarten and preschool, reducing health insurance costs and nurturing the state economy — though some of those programs are still being implemented.

“We know that the last few years have been challenging. Some of the toughest years in our history,” Polis said, citing the historically destructive wildfires in the state and the global tumult of the pandemic and, now, inflation. “But we’ve never kept our eye off of keeping Colorado moving forward.”

In 2019, Polis and lawmakers defelonized the possession of small amounts of drugs, including heroin, cocaine and fentanyl. They followed public health guidance against trying to arrest away addiction while arguing it would save communities money on locking up low-level offenders.

Then fentanyl washed through the country and the state. It helped fuel a quadrupling of overdose deaths between 2017 and 2021. Ganahl laid the blame on Polis and the bill making fentanyl possession a misdemeanor. She cited the death of a teenage girl who overdosed and died from fentanyl hidden in what she thought was Xanax as a consequence of Colorado’s policies.

Ganahl said she would declare “a state of emergency” over fentanyl. A state of emergency generally grants governments heightened powers beyond what they’re normally allowed to do, though she did not specify how she would use those powers or which ones she would invoke.

Polis pushed back that fentanyl has always been illegal — even when it was defelonized, it was still a misdemeanor to possess in small amounts — and that his administration worked with the legislature to create new charges and beef up the state’s behavioral health system.

Polis, the Boulder tech millionaire and green energy proponent, made a proud declaration from the lectern: He drives a car with an internal combustion engine and “I’m proud to.”

Meanwhile, he noted, his Republican opponent is the one who drives a Tesla, though Ganahl immediately pushed back that she also has a Chevy van with 140,000 miles on it.

It wasn’t the only time Polis, with his can’t-be-ideologically-boxed-in politics, aimed to flip typical talking points.

He attacked Ganahl’s pledge to reduce the state income tax to 0% and cuts to the state gas tax as things that would end up defunding the state patrol, by cutting its dedicated revenue source, and prisons through lack of funding. She disputed both points, arguing she would never allow that to happen as governor.

Polis also tried to flip the narrative on his 2021 push for a “Meat Out Day,” saying it was actually a sly bit of reverse psychology to help the industry. Ganahl clearly didn’t buy his excuse, even though she sarcastically thanked him for increasing the sale of meat as people protested the declaration.