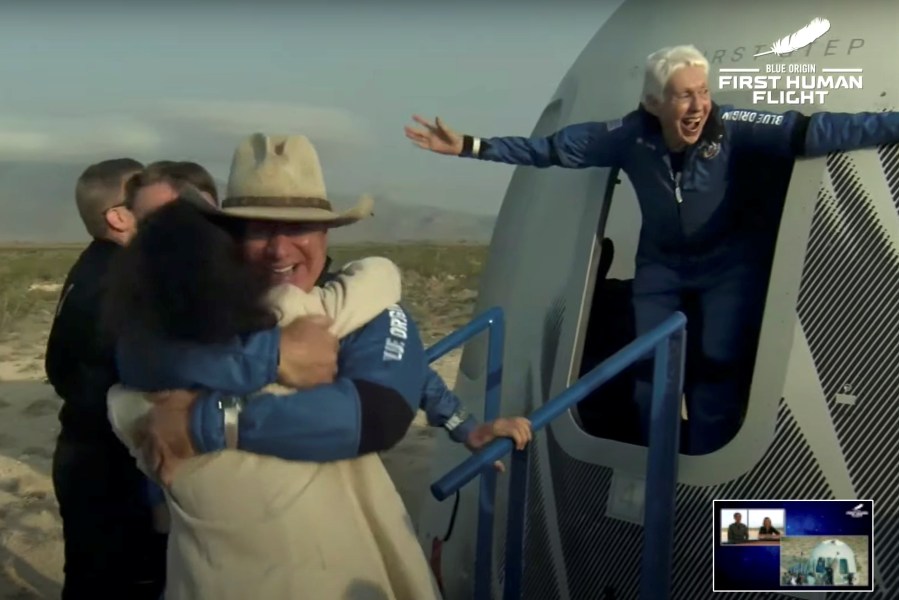 (NewsNation Now) — Billionaire businessman Jeff Bezos and three crewmates launched from a desert site in West Texas Tuesday morning on an 11-minute trip to the edge of space.

“Best day ever,” Bezos said after the capsule touched down on the desert floor at the end of the 10-minute flight.

“What we’re doing is the first step of something big,” Bezos said at a post-flight news conference. “We’re building a road to space so that our kids can build the future.”

At the conference Bezos announced a multimillion-dollar Courage and Civility award to lawyer Van Jones and chef José Andrés. Bezos said the men will each receive $100 million to advance philanthropic efforts for the non-profits of their choice.


How Jeff Bezos will blast into space

The launch comes a little over a week after fellow billionaire Richard Branson went to the edge of space. Blue Origin reached an altitude of about 66 miles, more than 10 miles higher than Branson’s July 11 ride. The 60-foot booster accelerated to Mach 3 or three times the speed of sound to get the capsule high enough, before separating and landing upright.

The passengers had several minutes of weightlessness to float around the spacious white capsule. The window-filled capsule landed under parachutes, with Bezos and his guests briefly experiencing nearly six times the force of gravity, or 6 G’s, on the way back.

Bezos, 57, who stepped down earlier this month as Amazon’s CEO, announced in early June that he’d be on his New Shepard rocket’s first passenger flight, choosing the 52nd anniversary of Neil Armstrong and Buzz Aldrin’s moon landing.


Dan Abrams joins NewsNation as network prepares for premiere of ‘Morning in America’ on Sept. 27

Bezos personally invited two of his fellow passengers — his 50-year-old brother Mark, an investor and volunteer firefighter, and female aviation pioneer Wally Funk. Joining them on the ultimate joyride was the company’s first paying customer, Oliver Daemen, a last-minute fill-in for the winner of a $28 million charity auction who had a scheduling conflict.

Bezos has been open about his childhood dreams of traveling to space and said via Instagram. “On July 20th, I will take that journey with my brother. The greatest adventure, with my best friend.”

Blue Origin has completed 15 test flights to space since 2015, carrying up experiments, children’s postcards and Mannequin Skywalker, the company’s passenger stand-in. Except for the booster crash-landing on the first trip, all the demos were successful.

The recycled rocket and capsule that carried up Tuesday’s passengers were used on the last two space demos, according to company officials.

While the diminutive New Shepard is meant to launch people on brief flights to the edge of space, the mega New Glenn will be capable of hauling cargo and eventually crew into orbit from Cape Canaveral, Florida, possibly beginning late next year. Blue Origin also has its eyes on the moon. Its proposed lunar lander, Blue Moon, lost to SpaceX’s Starship in NASA’s recent commercial competition to develop the technology for getting the next astronauts onto the moon. Blue Origin is challenging the contract award, as is , the other competitor.

Fewer than 600 people have reached the edge of space or beyond. Until Tuesday, the youngest was 25-year-old Soviet cosmonaut Gherman Titov and the oldest at 77 was Mercury-turned-shuttle astronaut John Glenn.

Blue Origin is working on a massive rocket, New Glenn, to put payloads and people into orbit from Cape Canaveral, Florida. The company also wants to put astronauts back on the moon with its proposed lunar lander Blue Moon; it’s challenging NASA’s sole contract award to SpaceX.

The Associated Press and Reuters contributed to this report.

See something, do something: A streets crew makes a life-saving decision