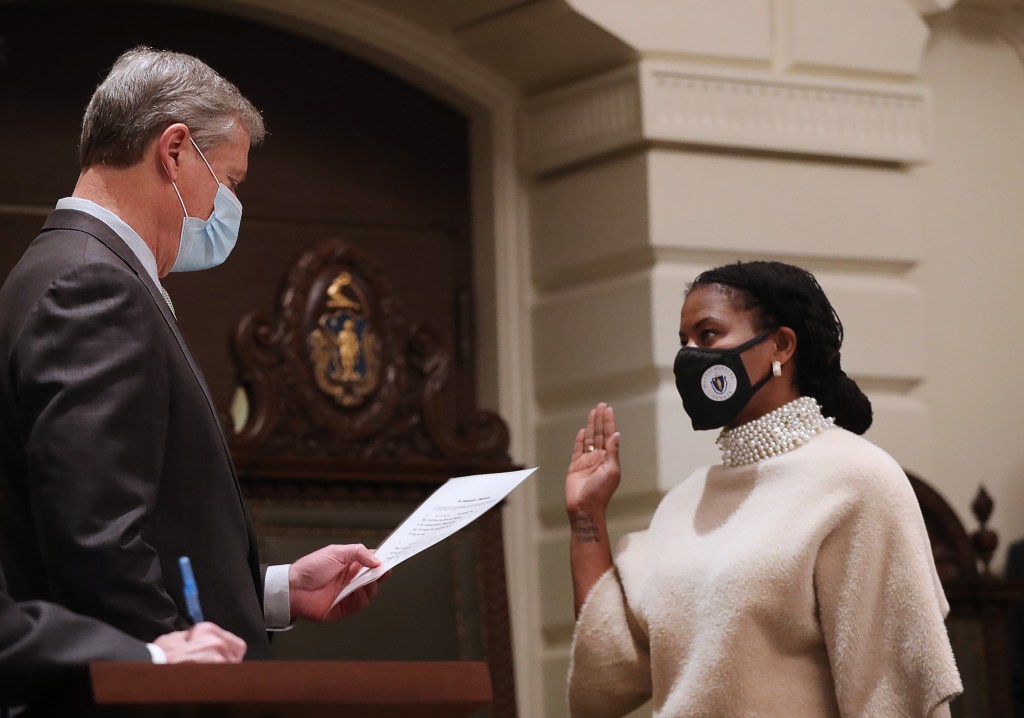 State senators welcomed their newest member, former City Councilor Lydia Edwards of East Boston, into the chamber Thursday after she was elected in a special ballot where she was unopposed.

Edwards, the first Black woman to serve the First Suffolk and Middlesex district, was sworn in wearing suffragette white on Thursday afternoon.

In her inaugural speech, Edwards thanked her “four mothers” and spoke directly to her biological mother, Bridget Edwards.

“I hope you know the reason why I won was because of you. Your story — you’re more popular than I am, mom,” the senator said.

Edwards also gave nods to her “other mothers” Sen. Linda Dorcena Forry, who was in the chamber, former Sen. Dianne Wilkerson, and the late Rep. Doris Bunte.

Edwards shared tales of her childhood inspiration to attend law school after watching Sidney Poitier’s portrayal of Thurgood Marshall in “Separate But Equal.”

She talked about her experience growing up as a Black woman and a descendant of slavery.

“I am his wildest dreams, and so many ancestors,’” the East Boston Democrat said.

Edwards joins the Legislature as one of a small number of people of color. She’s one of two Black members in the state Senate and the only Black woman. State Sen. Sonia Chang-Diaz, who is running for governor, is the only other woman of color in the chamber.

Welcoming Edwards to the Senate roster, President Karen Spilka said Edwards is “the 13th woman of the Senate, lucky No. 13. That is lucky.”

Edwards brings the branch’s Democratic caucus back up to 37 members out of a total of 40 in the chamber.

Even without the full Senate membership present, the chamber felt crowded for the pandemic era after nearly two years of sparse in-person attendance. About 17 senators were on hand for the ceremony, in addition to another 30 other officials, guests, staff, and news reporters. “I do want to acknowledge, it’s great having so many folks here, and seeing people in the chamber again. Thank you for joining us,” Spilka said.