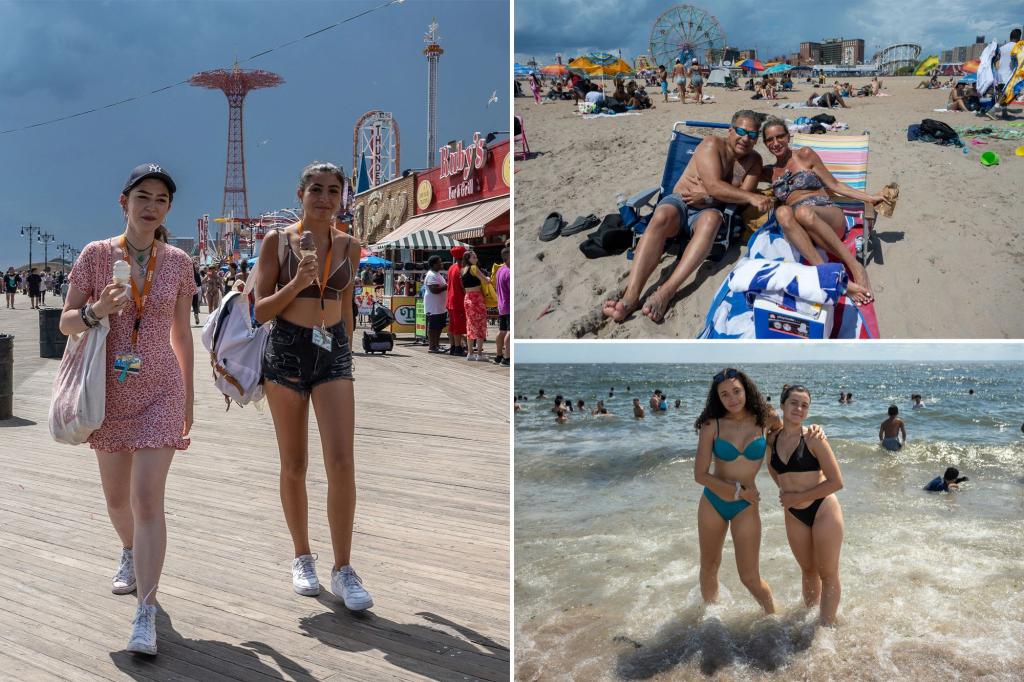 Don’t let the thermometer fool you.

As temperatures in New York City on Sunday hit 90 degrees, the “feels like” number got close to 100 — and the rain storm in the afternoon didn’t spell an end to the heat.

After the rain cleared, walking through the streets still felt like stepping into a sauna.

“It’s a vicious cycle,” he said while hanging out with friends in Manhattan’s Washington Square Park. “If I exert the slightest amount of effort in direct sunlight, it’s, ‘Oh, my god.’ “

Alexander Jusdanis, who sells on-the-spot poems in the park, said that when it’s this hot, “Sometimes the poems actually get my sweat on them.”

Jusdanis, 29, writes his ditties for parkgoers on paper in his typewriter, holding a sun umbrella up to try to keep even a little bit cool in between.

“I sit out here in the part that probably gets the most sun the longest just ’cause I don’t like to have other people around me,” he said. “It’s a good business decision — and a horrible, horrible health decision.”

He said business drops as the mercury soars. So Monday and Tuesday might not be the best business days for him, either. Temps are expected to top out at 92 degrees Monday. On Tuesday, it will be even worse, with the heat expected to peak at 95 degrees, according to FOX Weather.

“On Tuesday, you’re looking at about 10 degrees above average,” said meteorologist Samantha Thomas.

Thomas said tri-staters are suffering mostly because of high dew points, meaning the humidity turns the air even hotter.

“We have a lot of moisture in the air that’s just really making us get that sticky hot feeling, which only makes it feel worse,” she told The Post.

The good news is a “cold front” is coming in Wednesday, and temperatures should drop down to normal, or around 85 degrees, FOX said.

One of Rosalez’s friends, Angel Torrens of The Bronx, said Sunday that the sticky weather has even made it too hot to enjoy passing the time smoking or drinking.

“I barely want to smoke weed, and I smoke mad weed. But the weed makes me hot,” Torrens, 25, told The Post. “I’m scared to drink alcohol because I’m going to sweat my ass off even more.”

The only thing taking a hit in this heat is his wallet, he said, complaining of high AC bills and increased water use from all the showers he has to take.

“It makes you sweat and take five showers a day. It makes you waste a lot of money on f—king water,” Torrens said.

“We do have a nice break in sight for midweek,” she said. “So it’s really just getting through the next couple days, making sure everyone’s doing what they can to stay cool, keeping their pets cool as well.”