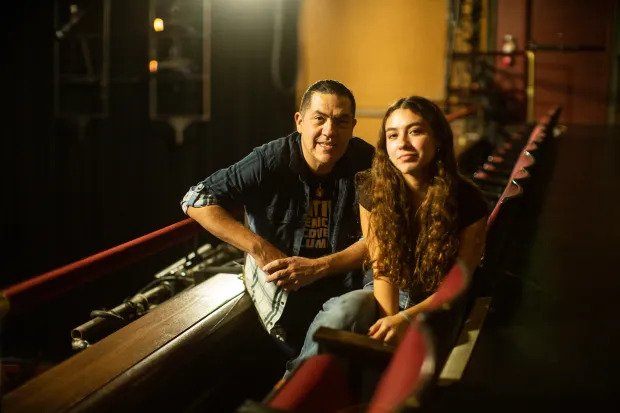 “Cashed Out,” the new play at San Francisco Playhouse, is about Rocky, a woman struggling with gambling addiction, and the effect it has on her family.

Playwright Claude Jackson Jr. is a lawyer by profession, director of the public defender’s office for the Gila River Indian Community in Arizona. Though he’s made some films with his brother, he’s relatively new to playwriting, and “Cashed Out” is his first production of a full-length play.

“Native Voices at the Autry in Los Angeles called for short plays, and they had a little contest,” Jackson says. “The theme then was tribal gaming. Ironically, I’m a product myself of tribal gaming. I was able to go to law school because of my tribe’s gaming interests funding my law school.”

“That play did well,” he recalls. “It won in that year, 2019. And then when San Francisco Playhouse came a-calling asking to do the play over Zoom because of the COVID pandemic, then they liked it as well. We just struck up a conversation, and then they commissioned me to do a full play.”

Rocky’s parents grappled with other addictions, and the play often flashes back to her childhood and scenes with her late mother. Woven through it is a theme about the family’s traditional basket weaving.

“I just love how it’s so reflective of so many lived realities for Native people,” says director Tara Moses, who’s also a playwright and a citizen of Seminole Nation of Oklahoma and of Mvskoke descent. “And not just Native people. I also love that this play is set on a reservation and there’s not any conversation about the reservation’s lack of resources. It’s set with people who want to be there, where it’s rich and robust. What Claude’s done so beautifully is bring a very real experience of a very specific community to audiences who may be used to stereotypes of what we think life is like on reservations.”

“Maya is very understanding,” Louisa Kizer says. “She kind of accepts everyone, and she will always be there for other people.”

A member of the Washoe Tribe of Nevada and California, Matt Kizer is also the artistic director of Native Writers’ Theater, a new theater company that’s part of PlayGround’s Innovator Incubator program, and Louisa is a student at Marin School for the Arts. It’s their first time performing together in a play.

“I find it really exciting to be able to do a show in San Francisco with Native actors, about Native issues,” Matt Kizer says. “What I would hope would be that the audience loves the play and wants to see more Native representation in theater, wants to go support that. I want other theater companies to get fired up about producing Native works and commissioning more writers and hiring more Native actors to play Native roles.”

“I think this is the first Native play the Playhouse has put on,” Moses notes. “This is a huge opportunity to be exposed to more artists, specifically Native artists, and open the doors for future opportunities for folks to come work here at the Playhouse, to come work in the Bay Area — and not even just on Native plays. And also to help inspire other theaters around the area to program more Native work. It’s just a large opportunity to create access and equity for Native artists down the line.”

Sam Hurwitt is a Bay Area arts journalist and playwright. Contact him at shurwitt@gmail.com or on Twitter at twitter.com/shurwitt.

Adrian Barich: We need a date to unite Australia, not divide it