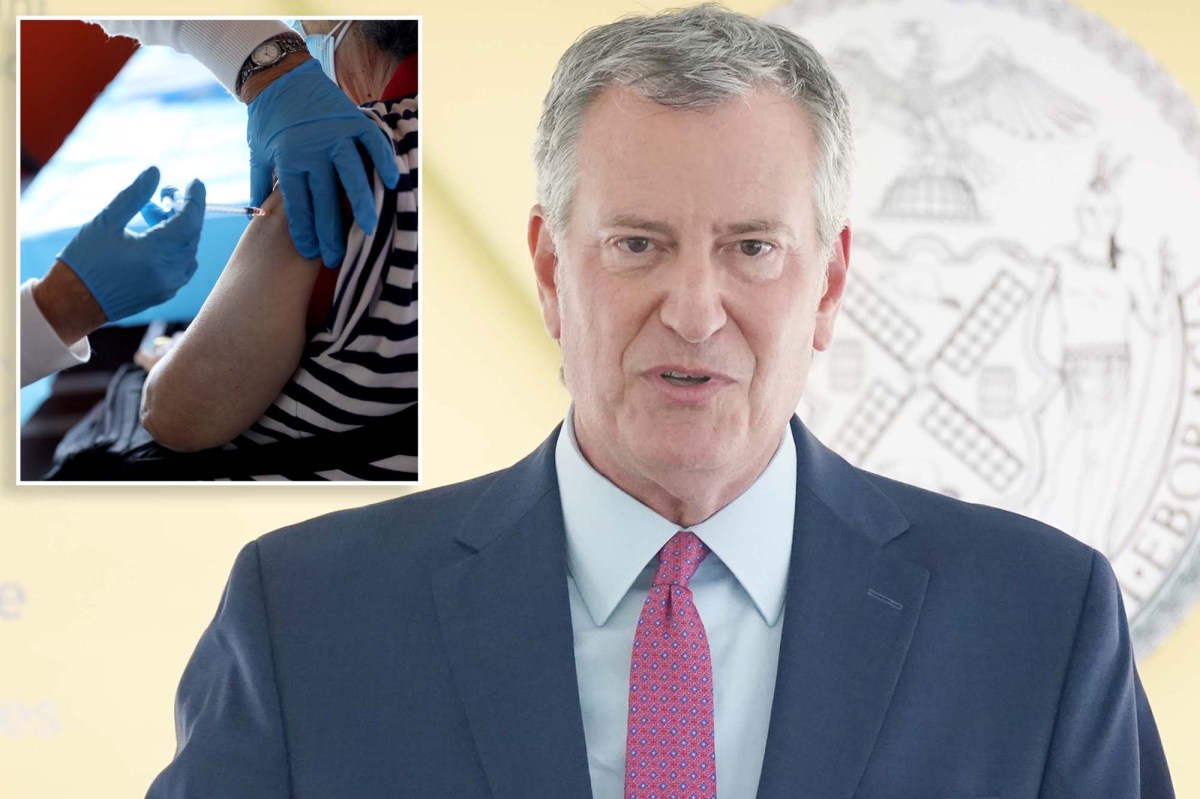 Mayor Bill de Blasio will announce Monday the expansion of the vaccination-or-test mandate to the entire city workforce — all 300,000-plus municipal employees, including the Department of Education and the NYPD.

The move comes after Hizzoner repeatedly hinted over the last week that he was considering expanding the jabs requirement as concerns mount over the hyper-contagious Delta variant.

“We tried purely voluntary for over half a year. We tried every form of incentives,” de Blasio warned Friday during his weekly appearance on WNYC’s “The Brian Lehrer Show.” “But now we’ve got to go further, we’ve reached the limits of a purely voluntary system.”

The mayor on Monday will announce that the rule will be expanded in two phases to eventually cover all city employees — some 314,000 workers — and some city contractors.

Those who work in publicly-run residential or congregate care facilities — like nursing homes — will be required to present proof of vaccination by August 16 or submit to weekly testing.

Employees at all other city agencies — from the Buildings Department to the NYPD to the DOE — will have until September 13, which is the first day of school.

City Hall says the mayor will also again encourage private employers to establish their own policies to encourage workers to get their shots before returning to offices en masse.

The policy is an about-face for Hizzoner, who insisted for weeks that the city could hit its vaccination goals by enticing reticent New Yorkers to get their shots through contests with prizes like tickets to basketball playoff games, MetroCards and weekend “staycations” at local hotels.

The dramatic shift comes as other parts of the country battle severe outbreaks of the new and highly contagious Delta variant of the coronavirus, which has also begun to push case numbers up locally.

However, officials have said the Big Apple’s jab campaign — 70.5 percent of adult New Yorkers have at least one shot — means the most devastating outbreaks will be largely confined to the unvaccinated.

“The Delta variant is like a freight train coming on, we’ve got to take it real seriously,” de Blasio warned Friday on WNYC.

The city’s coronavirus testing rate has once again pushed past 2 percent — more than doubling the sub-1 percent readings from early July, according to preliminary tallies posted by the city Health Department on Sunday. Gotham’s hospitalization rate has also begun ticking up again, the DOH stats show.

However, the outbreaks across the five boroughs remained far more contained than they are in less vaccinated parts of the country, particularly in southern states like Florida, Louisiana and Texas.

“We’ve tried everything else and we got results, but we need more” people to get vaccinated, de Blasio later reiterated during his Friday appearance on the radio show.