Oklahoma Board of Education makes COVID-19 plan a “recommendation” 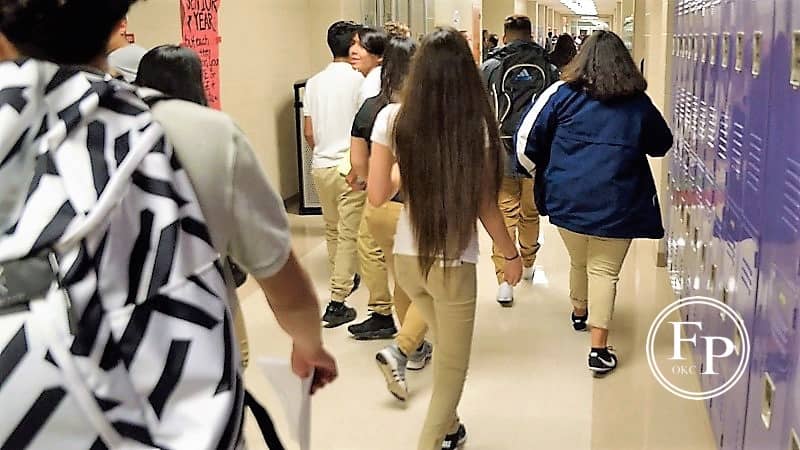 A four-person majority of Oklahoma State Board of Education rejected the compulsory parts of a COVID-19 response plan presented Thursday by State Superintendent Joy Hofmeister.

The plan sets up a uniform response to the spreading pandemic based on the new color-coding system rolled out July 8 by the Oklahoma State Health Department (OSDH).

The four board members voted for an amendment that essentially changed all requirement language in the plan to only “recommendations”.

It is a reversal by the same board that voted to close all state schools earlier this year because of the pandemic.

The effect now is that each school district across the state – even if within miles of each other – are on their own to decide which parts of the plan they will follow and which ones they won’t.

The state superintendent is elected by all voters in Oklahoma. Board of Education members are appointed by the governor.

The plan (original draft embedded below) calls for districts to use the new OSDH color-coded alert system as a trigger for each county’s schools to determine the level of response.

Escalation of a district’s response would be determined by the level of community spread of the disease in their county.

For example, one escalation is to require face masks for all adults and students (with exceptions). Another is an A/B plan where one half of the district goes to school on one day and the other half on another day to allow more physical distancing of students and staff.

And, at the highest level, the plan calls for the district to stop in-person instruction and move completely to virtual instruction to slow community spread.

“Today’s vote is very disappointing and one that likely will stoke more concerns for teachers, parents and families with a new school year only weeks away,” said Superintendent Hofmeister in a prepared statement after the meeting ended.

She acknowledged that everyone realizes how important it is for schools to open. But, the COVID-19 pandemic is still “sharply rising in our state.”

“I believe it entirely appropriate that the State Board establish a floor of recommended and required protocols to ensure a safer environment for all in the school community – teachers, staff and students,” Hofmeister said.

In a short virtual news conference afterward, Hofmeister said that there are a number of teachers who are close to retirement or past retirement age who may just choose to retire rather than risk their own life or experience the horrors of having their own students growing sicker and dying.

“Schools were counting on us,” Hofmeister said. “Now we will see districts afraid to open.”

Alicia Priest, president of the Oklahoma Education Association (OEA), quickly issued a blistering response to the four board members who voted to remove the compulsory teeth from the plan.

“This is not a board standing up for local control. It is a governor-appointed board hiding behind those words to escape their responsibilities to the children of Oklahoma.”

The statement argued that “our kids are the ones who will suffer” along with teachers, families and all of Oklahoma.

“Our districts need strong leadership, but they didn’t find it at the State Board meeting today,” Priest concluded.

The discussion from those who wanted the plan to be only a set of recommendations seemed to hinge on the belief that districts had to have or should have the freedom to develop their own plan.

For those who argued for the plan as presented, the issue was acknowledging that public health was the business of public schools and that public schools students and teachers were a part of communities where spread can and does happen.

Board member Brian Bobek moved the amendment that changed all requirement language to recommendations.

Board members Brian Bobek, Estela Hernandez, William Flanagan, and Jennifer Monies argued for and voted in the amendment to make the plan a set of recommendations.

“Are we going to allow our democracy to work?” asked Hernandez during discussion. “It’s about trusting local boards to do what they are trusted to do.”

Supt. Hofmeister, Carlisha Bradly, and Kurt Bollenbach argued for the original plan and voted against the amendment.

“This is a time for leadership,” said Hofmeister at one point in the discussion. “We have a window right now that is about to close.”

Carlisha Bradley argued that all of the public school districts were “not boarding schools” and that kids interact beyond the school building.

She agued that the plan was not too much but was “not enough” and that it was “the floor of our response.”

Free Press asked Hofmeister during the news conference if she thought the vote was along lines of philosophical differences and she disagreed.

“I think this is about timing. This is the exact same board that voted to close schools entirely on March the 16th.”

“Today, this board was split, and they did not share my sense of urgency that we set a mandate in various areas so that schools could open and there is a just simply disagreement on timing,” she said.

“It is not something that I feel is necessarily a fixed, philosophical difference that overrides the context of a global pandemic.”

“I believe in every single person on that board’s deep commitment to the safety and well being of Oklahoma school kids,” Hofmeister said. “And I know that as new facts are presented, as conditions change, this board is likely to reconsider this.”

Sustain our journalism by becoming a supporter

Hold Off on Sprinklers! – City of Round Rock

Family of Lonsdale shooting victim remembers the father of…

It happens here too: The history of school shootings in…