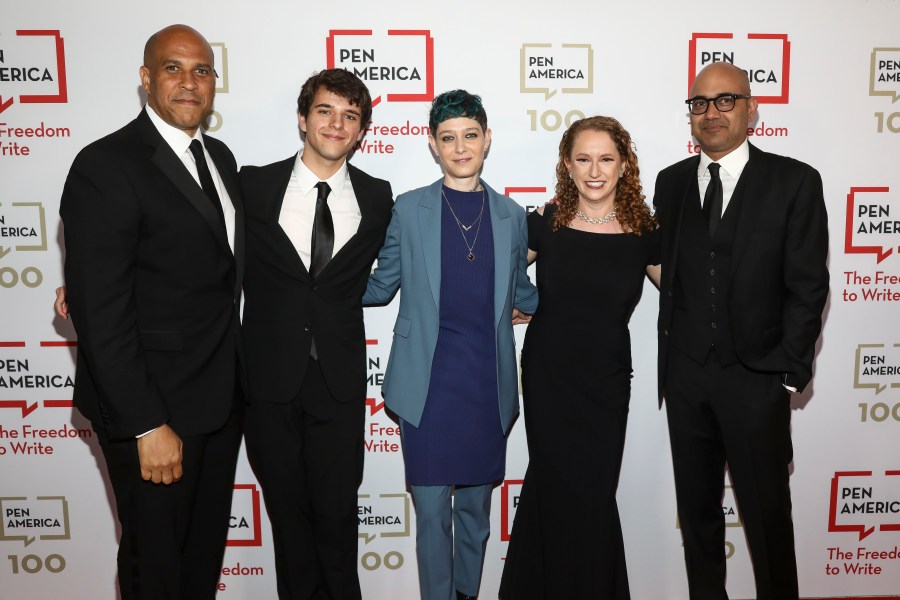 NEW YORK (AP) — From an imprisoned Ukranian journalist to a high school activist in Florida, PEN America paid tribute Monday night to democracy and free expression and warned about the dangers faced in the U.S. and abroad.

“Instead of being able focus on menial responsibilities such as school work, my generation has been forced to rapidly mobilize and fight for our future,” Florida teenager Jack Petocz, a prominent opponent of the state’s so-called “Don’t Say Gay” bill, said Monday. “If our collective voice couldn’t make a difference, then they wouldn’t be trying so hard to silence it.”

Marking its 100th year, the literary and human rights organization held its annual fundraising dinner gala, as some 650 authors, publishers, editors and others gathered at the American Museum of Natural History in Manhattan. Petocz was given the PEN/Benenson Courage Award, author Zadie Smith the literary service award and Audible.com founder Donald Katz the award for being a business visionary. Actor—comedian-commentator Faith Salie hosted.

Ukrainian journalist Vladyslav Yesypenko, currently serving a six-year sentence in a Russian labor camp for his reporting in Russian-occupied Crimea, was presented in absentia the PEN/Barbey Freedom to Write Award, given to political prisoners. Yesypenko’s wife Kateryna, introduced by actor Michael Douglas, spoke on his behalf.

“He believes people deserve to know what’s going, to know what the truth is,” she said, speaking in Ukrainian, her words translated by a PEN official. “My husband believes this so deeply he is prepared to risk his life. I share his commitment.”

Some presenters cited personal affinities with the honorees. Douglas noted that he had ancestors from Eastern Europe. Katz was introduced by Sen. Cory Booker of New Jersey, who recalled that when he was mayor of Newark a decade ago Katz made the city his base for his audio book producer and distributor.

“Audible was the first major company that moved to Newark when I was mayor,” Booker said. “People had given up on Newark. People ignored our city. People had declared our city dead.”

Smith, the British author known for such novels as “White Teeth” and “On Beauty,” wondered why she was receiving an award for literary service. As she acknowledged Monday night, she has largely confined her “service” to writing books, having “headed no committees, avoided literally every board I could, ducked out of the way of open letters and literary petitions as if they were lobbed hand grenades.”

She contrasted herself with such author-activists as Simone Weil and Albert Camus and James Baldwin, expressing her “awe and respect” for them, while calling her work its own kind of contribution, stating that “thought, too, is a form of action.”

“I know what I am. I am a novelist. I sit in my room. I write. I read. Sometimes when my children come in to ask me to do something, they will say, ‘You’re literally doing nothing!’” she said. “To you I want to confess I consider it my vocation to put whatever linguistic gifts I have at the service of language itself.”

How can driving dynamics keep up with the autonomous, electric revolution?