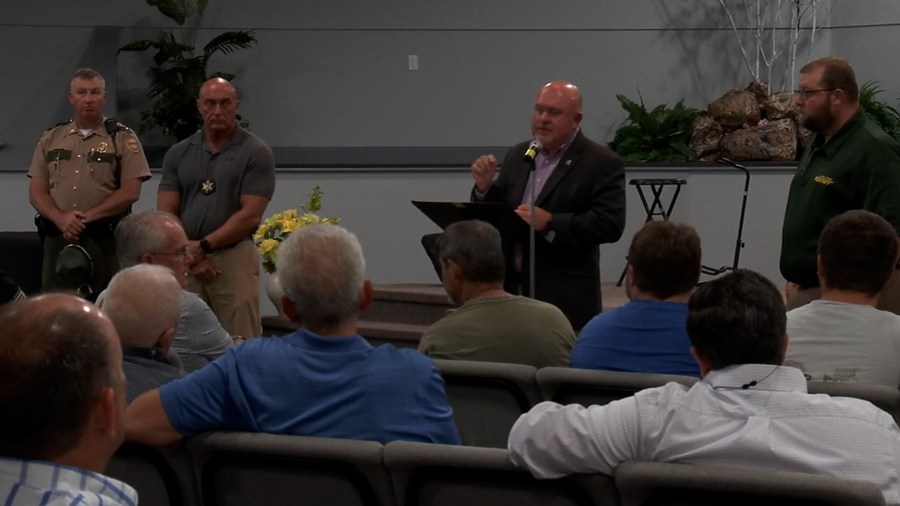 KNOXVILLE, Tenn. (WATE) — A town hall was held Thursday night in Campbell county to discuss church safety after several ‘concerning’ letters were placed on the front doors of churches and a number of businesses.

Sheriff Robbie Goins says there are no direct threats in those letters, but due to the disturbing nature of the letter, he called in state troopers and the FBI to help with the investigation.

“The FBI did tremendously to help us with this case and they’ve worked tirelessly since we contacted them Monday. So, it’s greatly appreciated what they’ve done so far,” said Goins.

As of Thursday night, 12 letters have been found in Campbell County, eight of the letters were left at baptist churches, one was left at a business in Jellico and two more were left at funeral homes. Goins said that additional similar letters had been found in counties south of Campbell including Hamilton County.

“I think we had eight churches total that we know of and we may have more than that they hadn’t reached out to us at this time,” said Goins.

A person of interest and a vehicle have also been identified through surveillance videos according to Goins. He said investigators currently believe the letters a being placed by a single person, not a group.

Goins answered several questions during the meeting. He hopes the meeting will help dispel rumors spreading on social media and keep people informed about the investigation.

“It doesn’t affect what we do and it doesn’t bother us partially because that’s the world we live in. We just want to put the truth out there and make sure the people in our county are informed,” said Goins.

If your church or business has received one of the letters, you are asked to call the Campbell County Sheriff’s Office Tip line at (423) 562-8095. If possible, Goins says to not touch the letter to help preserve evidence.

Goins also shared that the sheriff’s office plans on doing random patrols around churches to keep an eye out for any suspicious behavior. Goins stressed during the meeting that he believes there is no threat to churches and he encourages people to not be afraid to go to church.

For those concerned about safety, the sheriff’s office provides churches with free security team training. The course lasts about two hours and can be set up by calling the sheriff’s department.