Putin, Macron meeting over giant table: Why the distance explained 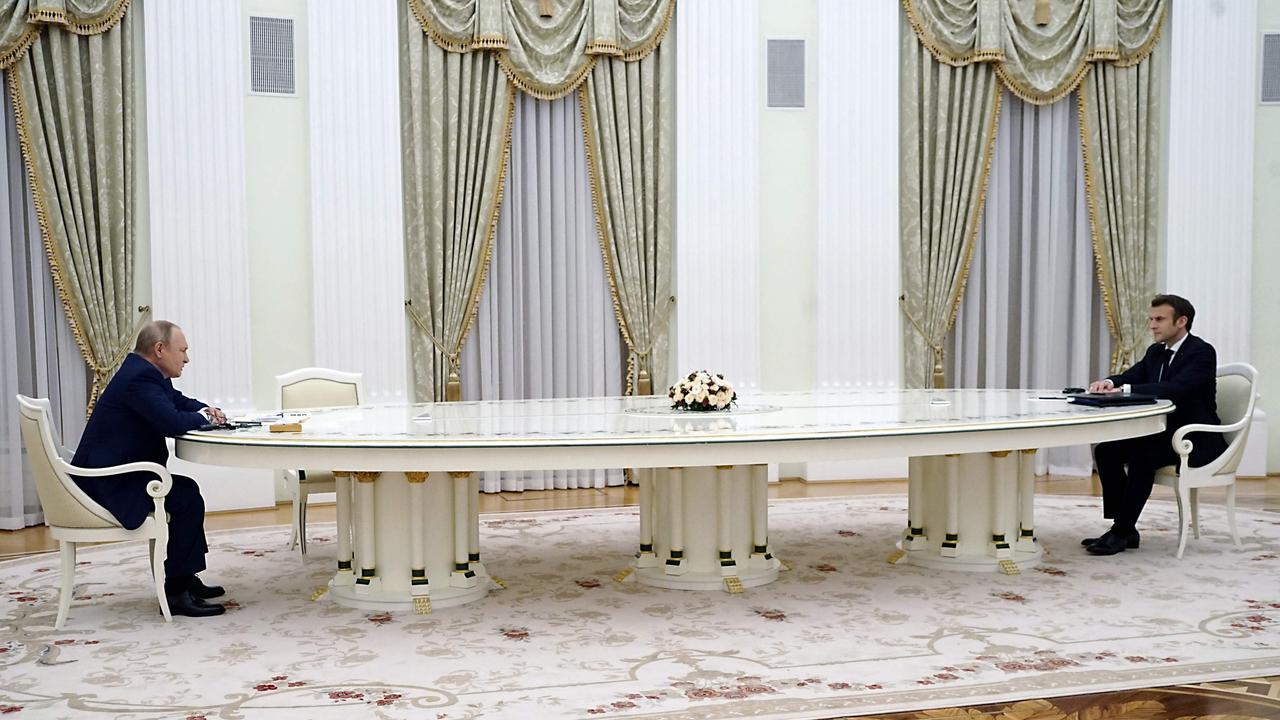 They are the pictures that had the whole world talking. Now we know why Putin made Macron sit at the opposite end of this enormous table.

They are the pictures that had the whole world talking.

Days after Russian President Vladimir Putin made French President Emmanuel Macron sit at the opposite end of his enormous table, we finally know why.

According to sources who spoke with Reuters, the visiting French leader was punished because he refused a request by Kremlin staff to take a Russian Covid-19 test.

Two sources close to Mr Macron said he had been given a choice: “either he accepted a PCR test done by the Russian authorities and was allowed to get close to Mr Putin, or he refused and had to abide by more stringent social distancing”.

The sources said Mr Putin’s entourage made it clear to the visiting leader that “Putin needed to be kept in a strict health bubble”.

“We knew very well that meant no handshake and that long table,” one of the sources told Reuters.

The leaders, who spoke for several hours, discussed the deepening Ukraine crisis and the need for de-escalating tensions between Russia and Ukraine.

The Russian President said he was ready for compromise and would look at proposals put forward by Mr Macron in talks on Monday.

But Mr Putin still blamed the West for raising tensions over Ukraine.

The photo showing the men at the enormous table offered something of a distraction from the serious politics at hand.

Mr Putin also took some heat for making a comment translated as, “Whether you like it or not, you’ve got to put up with it, my beauty”, in relation to the Minsk Protocol, which sought to sought to end war in the Donbas region of Ukraine.

Daily Beast columnist Julia Davis wrote on Twitter the comments were related to “disgusting lyrics” about a “woman lying in a coffin”.

Mr Macron reportedly did not react to the off-colour joke.

The two leaders voiced hope that a solution could be found to the worst crisis between Russia and the West since the end of the Cold War.

Repeatedly thanking Mr Macron for coming to Moscow, Mr Putin said at a joint press conference that the French leader had presented several ideas worth studying.

“A number of his ideas, proposals … are possible as a basis for further steps,” Mr Putin said, adding: “We will do everything to find compromises that suit everyone.”

He did not provide any details but said the two leaders would speak by phone after Mr Macron meets with Ukrainian President Volodymyr Zelensky on Tuesday.

Mr Macron said he made proposals of “concrete security guarantees” and that Mr Putin had “assured me of his readiness to engage”.

The French president said the proposals include an undertaking from both sides not to take any new military action, the launching of a new strategic dialogue and efforts to revive the Ukrainian peace process.

Mr Putin again denied that Russia was acting aggressively, despite Western fears of a possible invasion of Ukraine after Russia amassed tens of thousands of its troops on its borders.

“It is not us who are moving towards NATO’s borders,” he said, in reference to alliance deployments in eastern Europe.

The meeting in Moscow came at the start of a week of intense diplomacy over the Ukraine crisis, with US President Joe Biden also hosting German Chancellor Olaf Scholz in Washington on Monday.

US officials say Moscow has assembled 110,000 troops near the border with Ukraine and is on track to amass a large enough force — some 150,000 soldiers — for a full-scale invasion by mid-February.

Russia insists it has no plans to attack and has instead put forward its own demands for security guarantees.