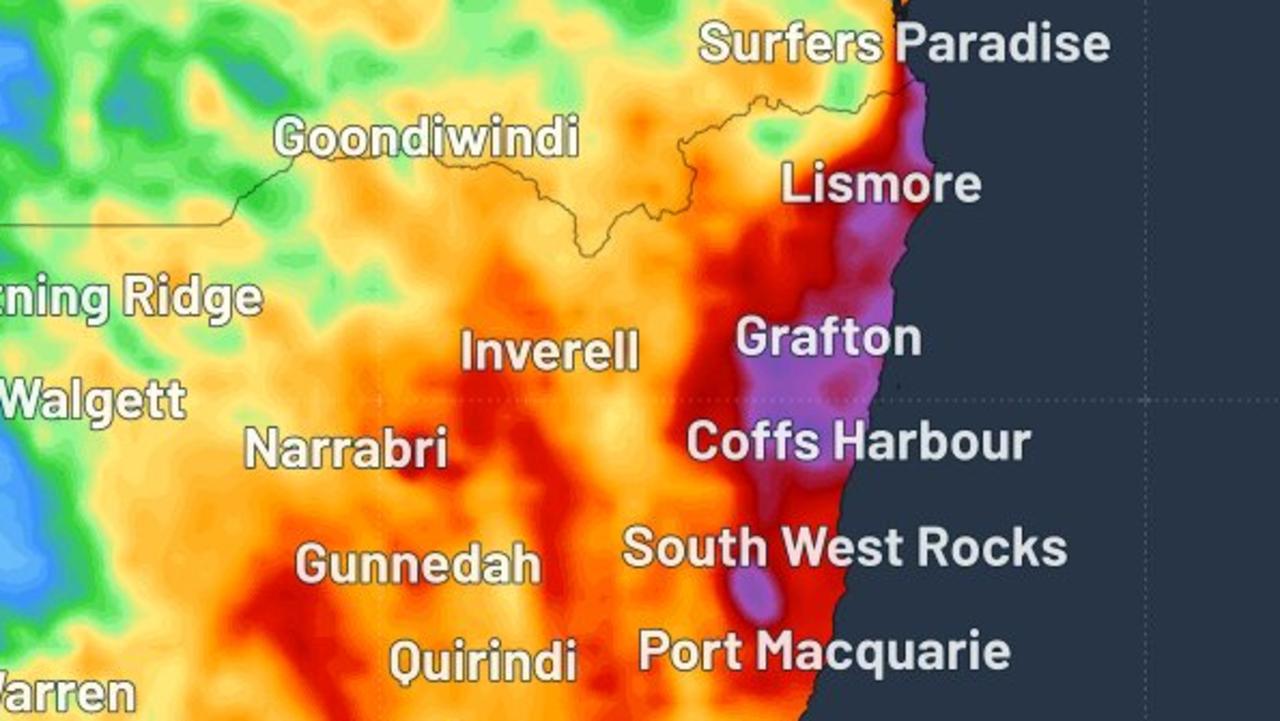 Southeast Australia has been battered by severe storms overnight, with rainfall totals of 250mm recorded over the space of just three hours.

The Bureau of Meteorology has warned that damaging winds, heavy rainfall and flash flooding could continue across the Gold Coast area in Queensland throughout Friday.

But its severe thunderstorm warning for the area was cancelled at 9.17am as the immediate threat had passed.

The situation will continue to be monitored and further warnings will be issued if necessary.

The Big 4 campsite at Helensvale had to be evacuated at midnight after campers woke up to find their tents flooded with water.

They quickly had to rush to higher ground, with one drenched camper saying it happened in the space of just 20 minutes.

“I was already awake and my sister just yelled out to me to get up. I got up and I thought, ‘It is probably not that bad’ and within 20 minutes, yeah, the water was going through our tent,” he told the Today show.

“We were knee-deep within minutes.

“It was chaos … just panic, dozens trying to get out at once.”

Queensland Fire and Emergency Services crews were called out to five incidents overnight involving vehicles that had become stuck in floodwater.

Vessels twice had to be deployed to rescue people from their cars. No injuries were reported from either incident.

More than 680 Energex customers in South East Queensland were without power as of 9.45am due to the weather.

The power provider said it could not give a definitive timeframe for when the power might come back on due to a landslide on Pine Creek Rd at Springbrook.

“A landslide on Pine Creek Rd is preventing our crews from gaining access to damaged sections of the power network in Springbrook,” Energex said.

“Our crews will deploy drones to assess the damage and the minute the road is cleared they will commence all repairs.

“We thank you for your patience while we work with council and other emergency services to get all issues sorted.”

Tweed Valley Adventist College had to close on Friday after the school’s grounds were flooded.

“SCHOOL IS CLOSED TODAY due to local flooding! We hope you’re all ok,” the school said.

Campers at the CMC Rocks music festival at Ipswich also had a torrid night after the campgrounds were drenched.

“We want to thank all our staff and campers for being absolute troopers through the weather last night,” CMC Rocks said.

“Everyone was kind to each other and let the CMC Rocks sprit shine through the storm.

“There is plenty of sunshine on the way, however the campgrounds will need some time to soak up the water. Please be mindful of this as you get around and avoid any unnecessary movement.”

Several roads were closed across the Gold Coast area on Friday morning due to the conditions:

A strong wind warning is also in place across Gold Coast water, while all beaches across the city are closed.

The bureau said rainfall totals up to 250mm were recorded in the spaced of just three hours in some areas overnight.

“A widespread area of thunderstorms over the south coast catchment area has produced heavy to intense rainfall with rainfall totals of 150-250mm recorded in the last three hours,” it said.

“The heavy rainfall has caused rapid river and creek level rises and minor to moderate flooding in some areas.”

Queensland Police and SES have advised affected residents to avoid floodwaters, follow updates throughout the day and adjust to the conditions.

In NSW, a severe weather warning is in place for the Northern Rivers district after the area was inundated with “intense rain” for several hours overnight.

A flood watch is in place for the region, with the areas that might be affected including Lismore, Tweed Heads, Murwillumbah, Byron Bay, Ballina and Casino.

To 6am on Friday, NSW SES crews had conducted 14 flood rescues and received 193 requests for assistance in the last 24 hours.

There are 22 flood warnings in place across the state, with the SES warning residents to prepare now to minimise damage and consider evacuation as an option if severe flooding is predicted.

The low is forecast to weaken as it moves off the northern coast line later on Friday or early on Saturday, but flash flooding remains a significant risk throughout the day.

“We have pre-deployed personnel, high clearance vehicles and aviation assets to the Port Macquarie and Lismore areas and are local units are on the ground ready to help their communities,” she said on Thursday.

“A local incident management team has been established at Goonellabah and is undertaking planning and intelligence activities and working with our community liaison teams to ensure the public is prepared also.

“The number of flood rescues continue to rise with people being trapped in their vehicles. We are again reminding people to monitor road conditions and if you should come across flood affected roads, make the safe decision, turn around and find an alternative route.”

The bureau advised the severe weather was no longer occurring on the Mid North Coast, so the warning for that district has been cancelled.