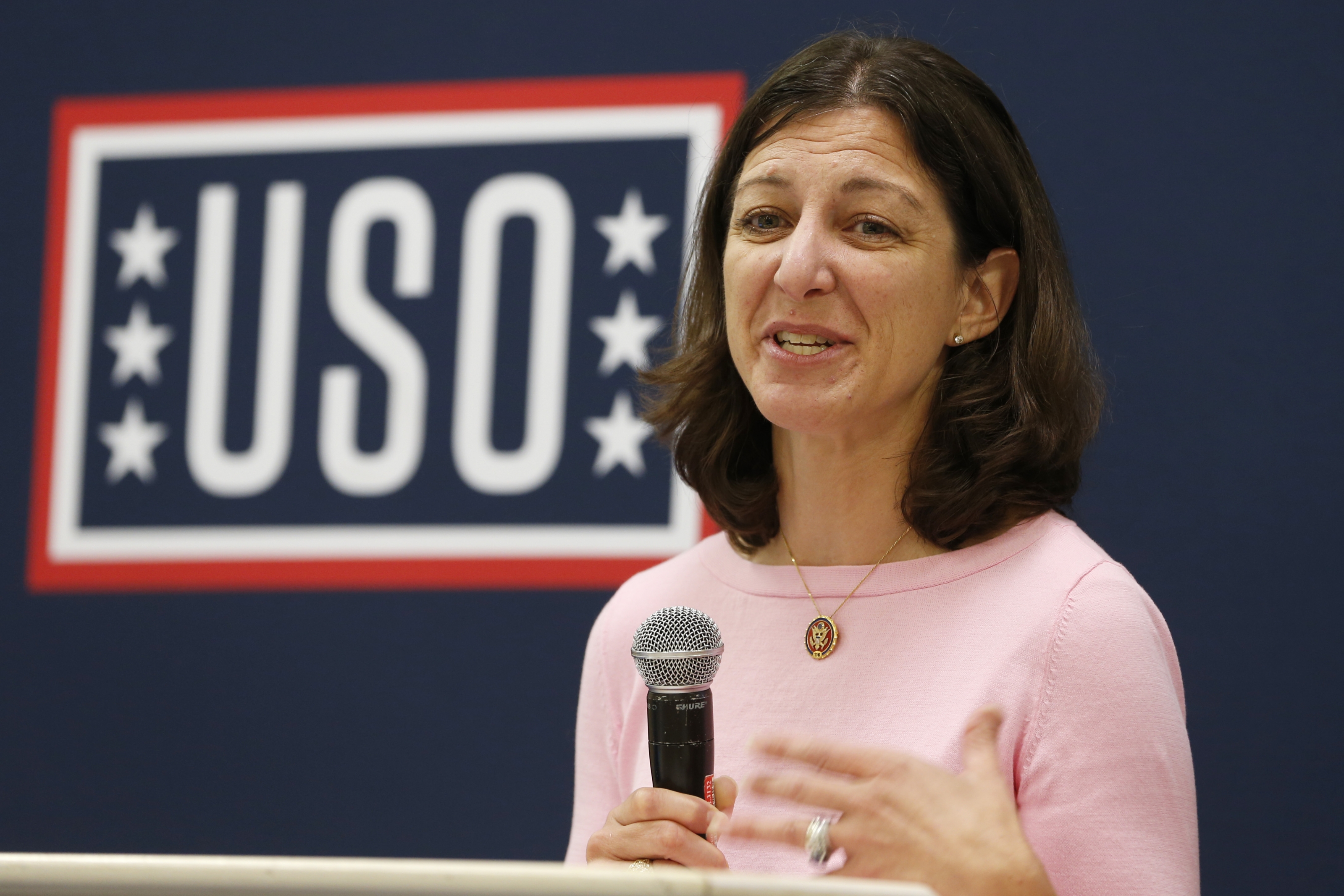 For Democratic Rep. Elaine Luria, whose Virginia district includes the world’s largest naval base, the next round of tough queries will concern a topic that is potentially even more sensitive for the military: why veterans were disproportionately involved in the Jan. 6 insurrection.

NORFOLK, Va. (AP) — When members of Congress head home to connect with their constituents, some hit tractor pulls. Others might stop by mom-and-pop stores. For Democratic Rep. Elaine Luria, whose Virginia district includes the world’s largest naval base, a recent swing included boarding an amphibious assault ship for a NATO ceremony and a speech by the chairman of the Joint Chiefs of Staff.

“The congresswoman right here in front of me asks tough questions all the time, pins my ears against the wall on many, many topics,” Gen. Mark Milley told a recent audience of dignitaries aboard the USS Kearsarge, a reference to Luria’s grilling him on military readiness during committee meetings.

Luria’s next round of tough queries will concern a topic that is potentially even more sensitive for the military: why veterans were disproportionately involved in the Jan. 6 insurrection. A 20-year naval veteran and nuclear-trained surface warfare officer who commanded 400 crewmembers in the Persian Gulf, Luria is joining House Speaker Nancy Pelosi’s special committee to investigate the mob attack on the U.S. Capitol.

“I bring some additional perspective,” Luria, 45, said in an interview from Naval Station Norfolk, where the Kearsarge and about 75 other ships are docked. She may end up being the lone member with military experience on the panel after most Republicans said they’d boycott following Pelosi’s objecting to the appointment of two GOP lawmakers, including a Navy veteran.

Luria noted the high number of online misinformation campaigns that targeted veterans and said many participants have since spoken about how politically and socially marginalized they felt.

“As long as we have a very large group of people in this country who feel like the only way for their voice to be heard is to show up and be violent, then there’s a risk of this happening again,” Luria said.

According to George Washington University’s Program on Extremism, 55 of the 547 people charged federally in connection with the insurrection, or 10%, have military experience — compared with a bit less than 7% of the population at large who are veterans. One of the most serious cases involves members of the Oath Keepers, an extremist group that recruits current and former members of the military and law enforcement, as well as first responders.

The attack has begun a military reckoning. The House Veterans Affairs Committee, on which Luria heads a subcommittee, has investigated recruitment of current and former military personnel by extremists. Defense Secretary Lloyd Austin took the unusual step of ordering a militarywide “stand down” to allow troops time to discuss extremism that could be growing within their ranks.

“I think the military is a bureaucratic behemoth, so anything that happens, they’re not going to turn on a dime,” said Carolyn Gallaher, a professor of international service at American University in Washington who studies right-wing paramilitaries. “There are definitely people trying to do something. It’s going to depend on how powerful they are and how well they’re going to be able to get the levers of the military bureaucracy to do what they want to do.”

A deeper investigation of Jan. 6′s events would seem a natural fit for Luria, whose district has 40% of its economy tied directly or indirectly to the Navy or the Defense Department. But the assignment could carry serious political risks for Luria’s chief congressional identity besides champion of all things Navy and national security — that of a centrist who has worked to bolster her bipartisan credentials and policy pursuits across the ideological spectrum.

“I think of myself as really moderate. I spent 20 years in the Navy. Didn’t think much about political party. I voted for the guy in ’16 who I ran against in ’18,” said Luria, referring to Republican Scott Taylor, a former Navy SEAL whose seat she won two cycles ago, then held in a 2020 rematch.

Many Republicans are dismissing the Jan. 6 committee as a political ploy, meaning the Democrats involved will face pressure to promote larger objectives pushed by their party’s leadership.

That may make staying moderate tough and mark a departure for Luria, who passed several pieces of legislation under former President Donald Trump, including providing tax relief to Gold Star families. But she also helped lead 2019 calls from House Democrats with national security backgrounds for an inquiry that helped Trump’s first impeachment come to fruition.

Luria is a cosponsor of progressive-championed efforts to raise the federal minimum wage to $15 an hour. She also has been outspokenly pro-Israel, even as her party’s left wing has criticized that country over the recent conflict in Gaza.

And she was the only House Democrat to oppose repealing Congress’ 2002 authorization for use of military force in Iraq. Luria says she opposes a repeal of a similar authorization for military force in Afghanistan, saying there hasn’t been enough discussion on what Congress should replace them with. She argues that is dangerous given the ongoing threat of foreign terrorism.

Proud House moderates are rare in an age where redistricting has reduced the number of seats whose territories aren’t hyper-ideological in favor of one party or the other. Luria’s 2nd Congressional District ranks No. 217 on the nonpartisan Cook Political Report’s partisan voting index, making it the median between the most-Republican and most-Democratic House seats in the nation — effectively the country’s swingiest swing district.

Including Virginia’s most populous city, Virginia Beach, as well as the rural Eastern Shore, Luria’s district voted for Trump in 2016 but shifted blue last November, as Joe Biden became the first Democratic presidential candidate since 1964 to carry Virginia Beach.

Luria nonetheless may face a tough reelection test as Democrats cling to their six-seat House majority. Taylor, the former congressman who lost to Luria, said such a long military career gives her ideological cover.

“If you’re a veteran and you’re a Democrat, you might be given a little more the benefit of the doubt. Like, you’re not going to be super far left,” Taylor said. “Never mind how you vote.”

During a Virginia Beach town hall hours after the Milley event, Luria was asked about the possibility the Capitol insurrection was a dry run for a larger attack. She cited the Jan. 6 committee, saying, “This is too important not to do anything.”

“I think we need to do this in an unbiased and nonpartisan way,” Luria said.

Luria has likened being on the Jan. 6 committee to her serving on an aircraft carrier launching simultaneous airstrikes on foreign terrorist targets in Iraq and Afghanistan, noting that then, “I didn’t turn to the sailor next to me operating a nuclear reactor and say: ‘Are you a Democrat? Are you a Republican?’”

She concedes that won’t stop critics from making her participation a potential line of 2022 attack, but shrugs off the possibility as common in today’s Congress.

“You can’t, like, help a preschool plant a tree,” she joked, “and not have somebody criticize it.”