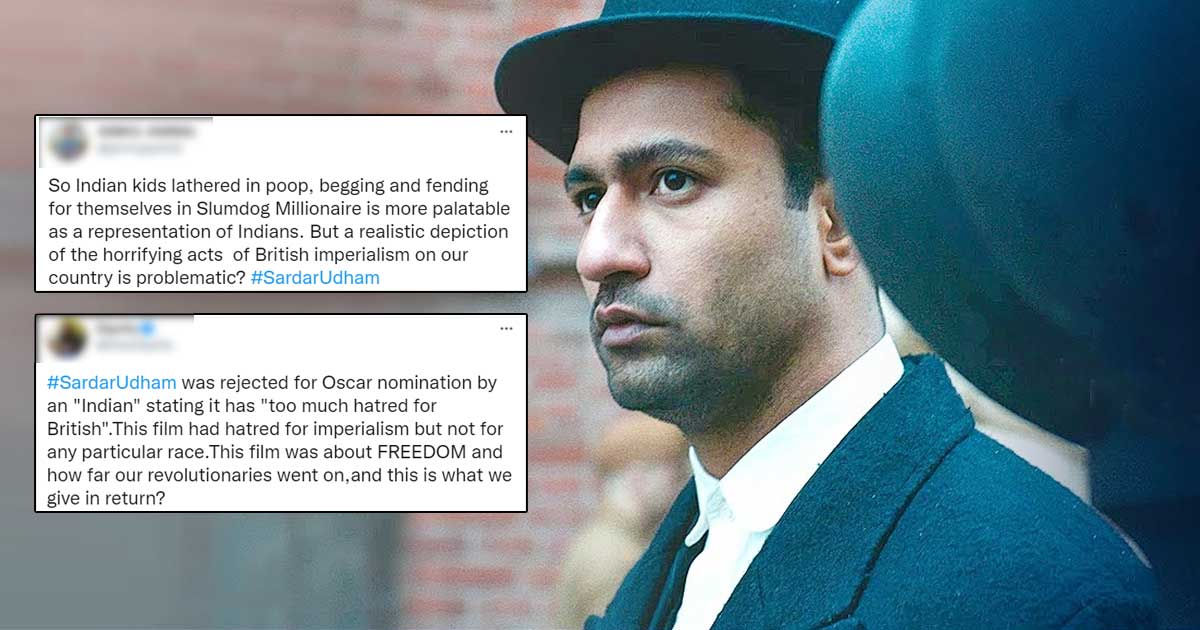 Vicky Kaushal starrer Sardar Udham was recently released on Amazon Prime and the period drama is receiving a great response from critics and fans alike. The biopic was among 14 other films which were considered to represent India in the Oscars but the jury rejected Shoojit Sircar directorial citing that the film ‘portrays our hatred towards the British.’

The 15 member jury was led by filmmaker Shaji N Karun and Tamil drama Koozhangal was announced as India’s official entry for the 94th Academy Awards.

After it was announced that the Udham Singh didn’t make it to the final list, jury member, Indraadip Dasgupta opened up about why they didn’t select the Vicky Kaushal starrer, he said, “Sardar Udham is a little lengthy and harps on the Jallianwala Bagh incident. It is an honest effort to make a lavish film on an unsung hero of the Indian freedom struggle. But in the process, it again projects our hatred towards the British. In this era of globalization, it is not fair to hold on to this hatred.”

While other another jury member, Sumit Basu added, “Many have loved Sardar Udham for its cinematic quality including camerawork, editing, sound design and depiction of the period. I thought the length of the film was an issue. It has a delayed climax. It takes a lot of time for a viewer to feel the real pain for the martyrs of the Jallianwala Bagh massacre.”

The reason to reject Shoojit Sarcar’s film from the Oscars race didn’t go well with the netizens as many came out and criticized the jury’s decision. A user wrote, “#SardarUdham was rejected for Oscar nomination by an “Indian” stating it has “too much hatred for British”. This film had hatred for imperialism but not for any particular race. This film was about FREEDOM and how far our revolutionaries went on, and this is what we give in return?”

Another Sardar Udham wrote, “So Indian kids lathered in poop, begging and fending for themselves in Slumdog Millionaire is more palatable as a representation of Indians. But a realistic depiction of the horrifying acts of British imperialism on our country is problematic? #SardarUdham”

#SardarUdham was rejected for Oscar nomination by an “Indian” stating it has “too much hatred for British”.This film had hatred for imperialism but not for any particular race.This film was about FREEDOM and how far our revolutionaries went on,and this is what we give in return? pic.twitter.com/dLaDKftTlu

So Indian kids lathered in poop, begging and fending for themselves in Slumdog Millionaire is more palatable as a representation of Indians. But a realistic depiction of the horrifying acts of British imperialism on our country is problematic? #SardarUdham pic.twitter.com/tQwpYFZ79o

VILE. FFI jury member Dasgupta rejected Udham as India’s Oscar entry because “it projected our hatred towards the British”.

Hollywood shouldn’t have made movies on Nazi Germany because it shows hatred to them ?Indraadip would have rejected Schindlers list from a nomination too 🙂 what a clown show India has put up with. While #SardarUdham wouldn’t have won an Oscar .. Indian Jury won the fools award. https://t.co/L8dAEmLZQV

Coward, biased and narrow minded #OscarJury #Oscars2022. They hv rejected #SardarUdham by saying that “It projects hatred towards the British” den wat da hell u portrayed in #SlumdogMillionaire is an extremely objectionable even da name. Shame on u. #Oscars don’t hv guts.

#SardarUdham
Is OSCAR given for acting or politics? I don’t find it for acting anymore,as Sardar Udham subject to litmus test on non acting criteria.

No point in debating on #SardarUdham‘s Oscar rejection now but the reason is absolutely crap
Someone should ask the jury about their feelings about Jallianwala Massacre and if the hatred against Britishers afterwards is justified or not ,we are yet to receive an apology from them

Must Read: When Raveena Tandon Turned Down Crying On A Talk Show: “Why Would I Want To Cry In Front Of The World?”

Stellantis targets up to €20bn in revenue through…