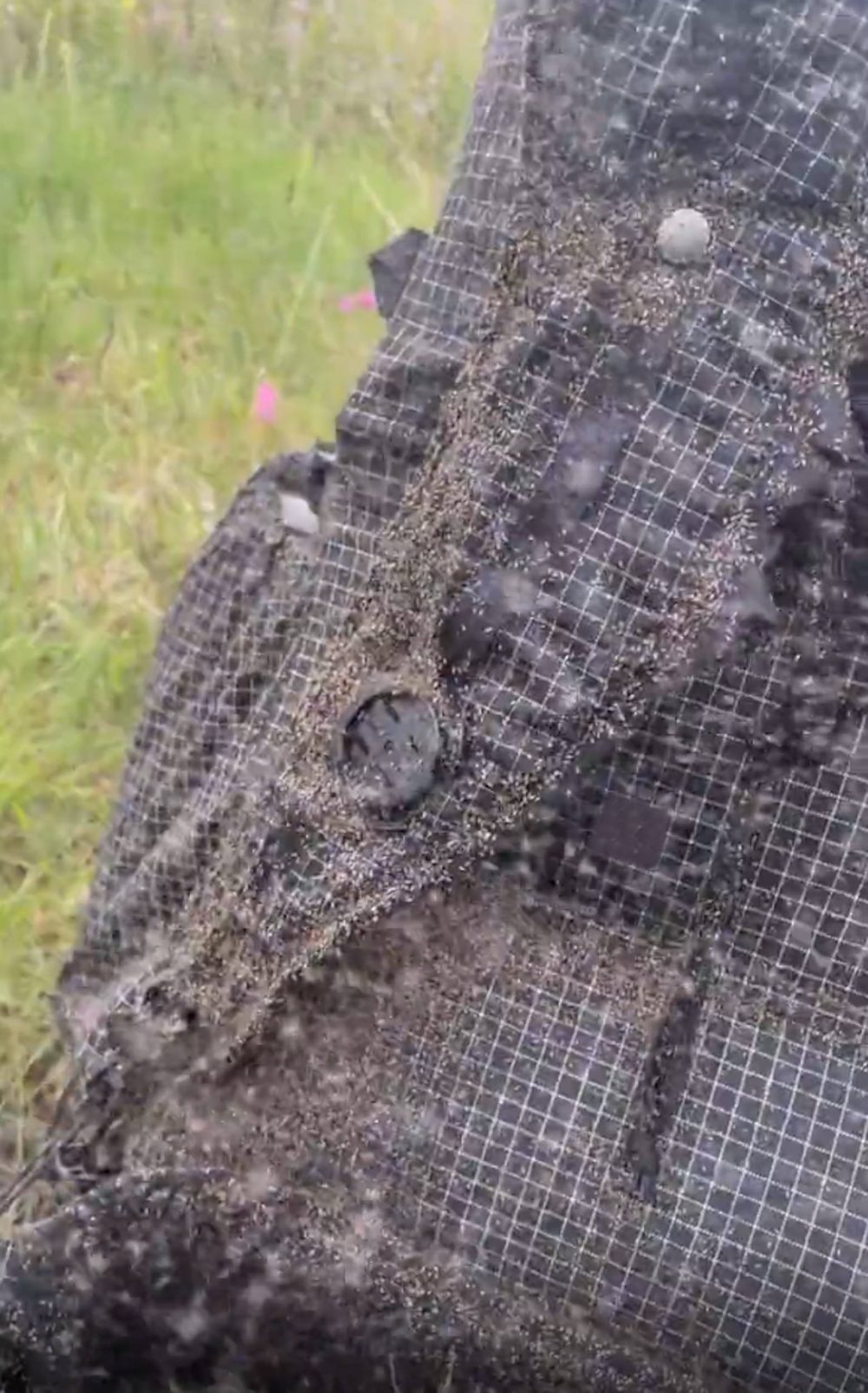 A SKIN CRAWLING video shows a hill walker being completely swarmed by thousands of blood thirsty midges in the Scottish Highlands.

Fortunately Colin was wrapped up with long sleeves, a midge net over his face and his socks tucked tightly into his trousers to keep insanity inducing insects at bay.

In the clip, a gigantic swarm of midges can be seen creating a blanket over the straps of Colin’s rucksack.

Thick clusters of the beasties are shown flying around together and heard buzzing in this year’s midge mega hatch.

Hundreds of midges can also be seen crawling all over the campers’ socks, and despite his best efforts for protection, many found their way through.

In the video, Colin, an outdoor equipment designer from Tadcaster, North Yorkshire, can be heard commentating on the swarms.

He said: “Look how thick the midges are on my pack.

“It is absolutely covered. I’ve seen a lot of midges before but this is probably a different level.

“Just look at all these. This is ridiculous.

“I’m wearing every bit of protection I’ve got, I’ve got Smidge on and I’ve got a head net on and I’ll still take a lot of bites.

“Around my ankles, even though everything is sealed, some are getting in.

“Just to finish off to make you itch that last little bit, just look at all of them.

“I’ve got the pleasure of putting that on in a minute.”

The post has now collected over 2,000 likes and hundreds of comments from viewers who were horrified by the footage.

@TonTonStu said: “I don’t know who their natural predators are but they need to be having a word with themselves.”

@johndowmiller said: “My middle son is doing the North Coast 500 this week. I warned him. Did he listen? Naw!”

And @GeoDev7 joked: “Never kill a midge… Thousands turn up at the funeral.”

Speaking today Colin said: “I’m comfortable with outdoor ‘wildlife’ and have encountered everything from bears down to the humble midge on my travels.

“Midges are an annoyance but for me part of what makes Scotland what it is, a challenging place to hike successfully.

“When I camped at Loch Monar the night before there were no midges, not one. It was too windy.

“The wind died down that night and I could hear what sounded like rain on the tent, except the sky was clear. I knew this was midges trying to get in the tent!

“In the morning it was just as bad. I could see huge clouds of midges around the tent waiting for me to come out.

“I came well prepared for the midge and always carry a mesh head net and Smidge spray. Both are normally very effective.

“As soon as I exited the tent I was covered. Even though I had good protection the sheer numbers of midges meant that total protection was impossible.

“They are so small and in such a quantity that any weakness will be found. Normally I’d have breakfast before leaving camp but on this day I just packed everything away, made that video and left. It was impossible to eat in that situation!”

According to The Midge Report, recent warm weather will have caused a “mega hatch”.

Midge expert Dr Blackwell said: “This year there’s due to be a bigger hatch than ever of Scotland’s famous highland midge.

“Each year the season is becoming even longer.”

Midge season in Scotland typically lasts from the end of May to September.

Oklahoma man still in ICU after four months due to COVID-19, needs double lung and heart transplant to survive off ventilator

How does ‘Dead Space’ remake compare to…