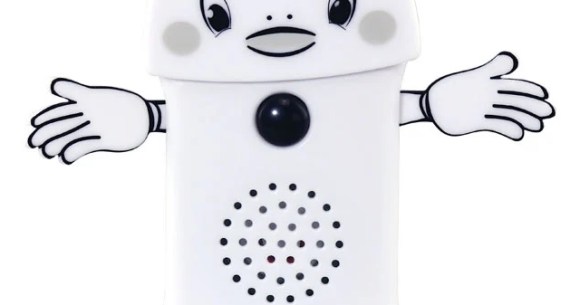 Feel like you’re in the supermarket at home or on the go.

There’s a good chance you’ve never actually seen Yobikumi-kun, but anyone who’s lived in Japan will probably have encountered him in supermarkets or some other retail businesses.

Rather than his roughly 20-centimeter (8-inch) tall stature and welcoming open arms, he is mostly famous for his enchanting siren call that echoes through the seafood section or other aisles of your local stores.

Yobikumi-kun was born at the turn of the 21st century by Gunma Denki in Gunma Prefecture. Struggling to compete with other Japanese giants like Sony, Sharp, and Panasonic, Gunma Denki finally found a niche market that they could fill. At that time, supermarkets used looping cassette tapes to announce products to shoppers, but over time the tape would get worn out and the sound quality degraded considerably.

Gunma Denki had the idea of replacing cassettes with memory cards that played audio files in two separate channels so the same music could be reused even when the message changes. They were able to add in other features like improved sound quality, compact size, and motion detectors, and wrapped it all up in a cute little anthropomorphic package.

However, when it came time to choose background music, Gunma Denki was at a loss. Copyright royalties were too expensive for them, and the engineers weren’t crazy about popular music at the time anyway. So they enlisted a musician from an ad company to come up with some simple sample tunes.

The musician came back with about six samples in various styles such as bossa nova, folk, and rock. But it was the up tempo melody heard in the video above that was ultimately voted in. The song itself is simply called “No. 4” but is often referred to as “Popoh-Popopopo” or “Popopopopoh.”

The incredibly catchy song was a hit and continues to thrive to this day, inspiring several cover and tribute videos on YouTube.

Some even bought their own Yobikumi-kun, but since they are intended for commercial use they don’t come cheap. On Gunma Denki’s online shop a standard model sells for 23,980 yen (US$211), making “Popoh-Popopopo” on-demand a luxury afforded only by a privileged few.

▼ Video of Yobikumi-kun Mini in action

Even still, neither Aoshima nor Gunma Denki were probably prepared for the massive reaction that Super Sound Yobikumi-kun would elicit.

Although the miniature speaker isn’t set to be released until this December, preorders for it have already sold out. It shot up to the number one spot of the General Toys ranking on mail-order toy retail giant Amiami.com, and it reached the number two spot on the entire website for a day. Buzz online has also been consistently strong, with comments such as the following.

“It’s the little guy at the supermarket! I’m interested in this!”
“This music always plays when I go to buy a roasted sweet potato.”
“That’s a great price too.”
“I think it’s cute for those of us who only go shopping, but for the staff that song must make them insane.”
“Why is the original one so expensive?!”
“Whenever you hear it once it just keeps circling your brain.”
“I wonder if it plays the other songs too.”

As we mentioned before, originally six tunes were crafted, but actually two songs were voted in to be included in the original Yobikumi-kun device: “Popoh-Popopopo” and one of the bossa nova melodies.

However, given the really low price-point and no mention of bossa nova in any of the product descriptions for Super Sound Yobikumi-kun Mini, it is mostly likely just the single track.

Nevertheless, getting one at this point is near impossible, but this really would be an ideal Christmas gift for that person who has everything. In all seriousness, I could see it being just the thing for that homesick Japanese person living abroad, or conversely, people who have returned to their home countries after living in Japan for a while and want to feel a little nostalgia from time to time.

It just goes to show how sometimes the most unusual ideas turn out to be the greatest.

Climate Council to finalise first carbon budget today – but what does it mean?

Flight cancellations at LAX continue as Fourth of July…