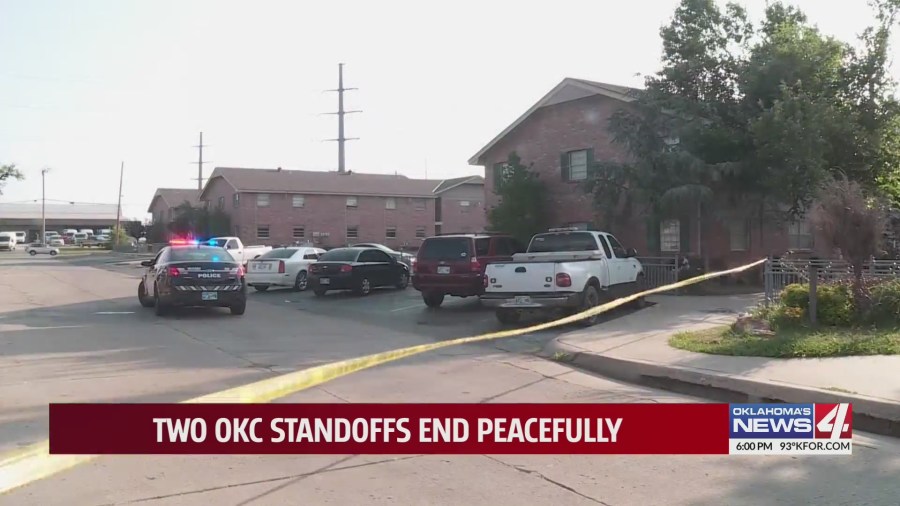 Both suspects surrendered, and no one was hurt in each case.

The first one started around 3 a.m. at the 3800 block of North Hartford.

Police say two victims told them a friend came pointing a gun at them. While they were able to get out, there were more people inside.

UPDATE: Both Oklahoma City standoffs over

The suspect had two felony warrants out of Cleveland County. He came out after several hours.

“TAC Team responded, they negotiated with the person inside the apartment. He came out the back door and surrendered peacefully, and was taken into custody,” Padgett said.

Skyler Gonzalez describes what she saw.

“I just went over to my friend’s house and my former roommate was there. He was pretty angry and he just started pointing guns at everybody, threatening people to pop if they didn’t do what he said and at that moment, I was like, ‘Wow, he’s not kidding and I need to get out of here immediately,'” she said.

She says it was frightening, especially with kids in the area.

“It was really scary though. This person used to be my best friend, so not only did it scare me, but it really hurt my feelings that he would do something like that. He turned into everything he promised he wouldn’t. It was just really scary and really heartbreaking, and I’m upset it had to end like this, but some things have to happen for everybody’s safety, you know, like kids live here,” she said.

Officers had a busy morning. There was another standoff on the 5800 block of Northwest 29th that started around 5:30 a.m.

When police got there, they saw the suspect outside with a gun. Then he went back inside and held about six people against their will.

“Some type of domestic had happened before we arrived. As a female was trying to leave the apartment, the male subject came outside, fired multiple rounds into her car, grabbed her and brought her back into the apartment,” Padgett said. “After probably four hours, we were able to get one person at a time to come out of the apartment, and eventually everybody inside the apartment surrendered peacefully.”

Neither suspect has been identified yet. It’s also not clear how the other people involved in each case are related to the suspects.