Sydney weather: Warning as a month’s rain to fall in a day 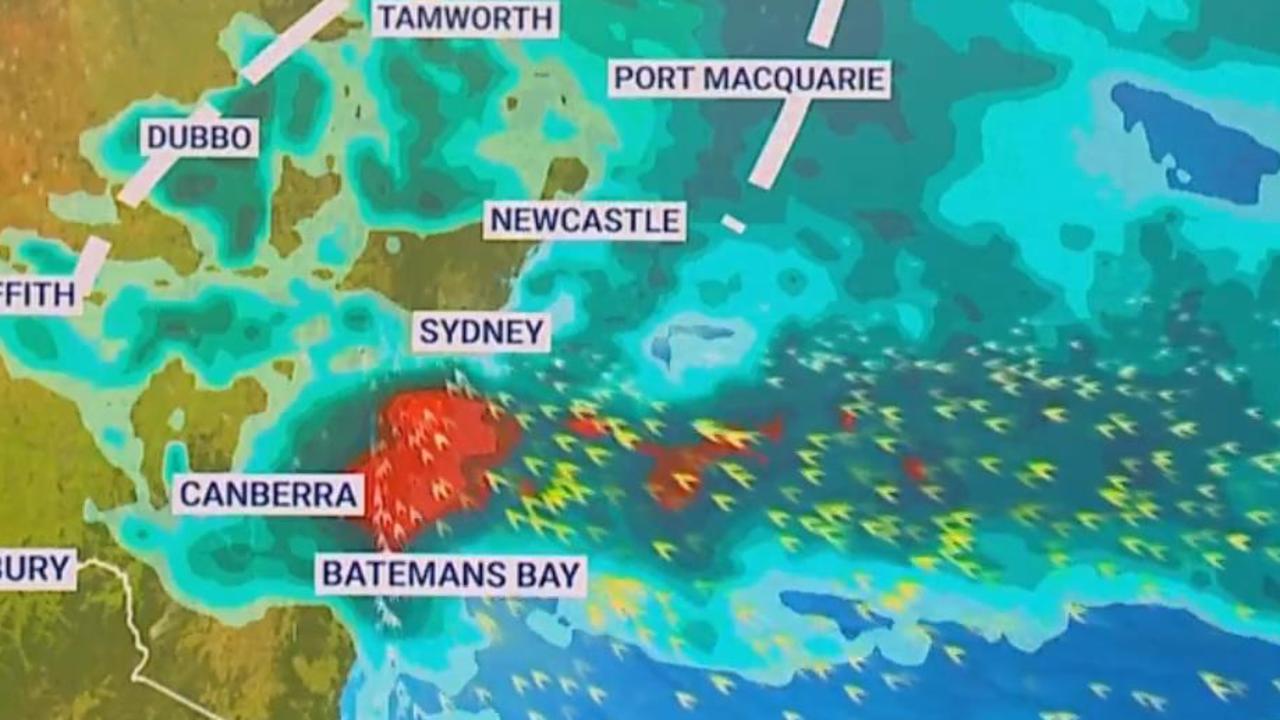 The Bureau of Meteorology and the SES have issued a strong warning to millions as a month’s worth of rain is forecast to fall in a single day.

The Bureau of Meteorology and the SES have issued a strong warning to millions of residents to watch carefully for weather alerts and to prepare for possible evacuations as a month’s worth of rain is forecast to fall in a single day this weekend.

They have warned of widespread flooding as hundreds of millimetres is set to drench communities along the east coast — with Sydney and the Illawarra being some of the worst-affected areas.

A 500km band of intense rain is forecast to hit communities from Port Stephens all the way down to Batemans Bay.

The BOM says coastal communities in these communities will “bear the brunt” of the heavy downpours but that the “rapidly evolving” nature of the weather system means that residents in Queensland and further afield in NSW should also pay attention for weather warnings.

The timing could not be worse for NSW and Queensland residents, who will bear the brunt of the major wet weather event, as school holidays begin today.

NSW residents in particular have been warned by the SES to reassess whether it is now safe to travel given how dire the forecast is for the coming days — with the BOM calling the weather system “dangerous”.

“What we’re seeing is the formation of a coastal trough off the New South Wales coast,”

she said. “We know these are quite dangerous systems and that they have produced widespread flooding in the past and that’s certainly on the cards for the next few days.”

Showers are already begun hitting large parts of the NSW coast, but it is set to get worse from Saturday — when the heaviest rain will fall — all the way through to Monday at the earliest.

“It looks like the focus area firstly will be around Sydney on Saturday,” Ms Golding said. “So we’re expecting some locations over the next few days and even tomorrow, could see what they would normally see in the entire month of July in one day.

“The rainfall will lead to riverine flooding and flash flooding, as we know that landscapes are quite vulnerable at the moment and the water can move very quickly down the slopes and through the waterways.”

Warning to stay off the roads

NSW SES Commissioner Carlene York said because dams and rivers were already full, there was “significant” concern about what is to come for communities across the state.

“This significant rain event could have some major effects across communities from Port Stephens down to Batemans Bay so we’re preparing and getting community messaging out to let them know they’re in some of these areas of risk and to be ready.

“So I’d remind the community to keep up to date with those messages that we’re putting out.”

She said just because your home may not have been hit in the previous major weather events this year, it does not mean your community will escape unscathed this time.

“I don’t want people to be complacent because their house or business has not been affected in the past,” she said. “It doesn’t mean that it might not be affected through these forecast rain events that will go over a number of days.”

She also had a warning for Aussies who are planning to travel over the coming days.

“It’s important to remember that in these areas that are a minor to major flooding risk, these those low lying areas will be significantly affected such as caravan parks, and camping grounds,” she said.

“We don’t want people to travel on the roads during these heavy days of rain if they are placing themselves at risk. So think about the travel that you might have to do across any of these locations.”

The BOM says that the erratic nature of the weather system means it is hard to predict when the weather will clear up.

“It’s pretty early days for system to know when the rain will stop but I would say that the rain will continue into Monday and potentially into Tuesday,” Ms Golding said.

Sydney will be one of the worst affected areas over the coming days as the NSW coast between the Central Coast and the Illawarra is forecast to cop 200-300mm of rain.

Forecasters have warned the systems, including a treacherous East Coast Low zeroing in on Sydney as well as torrential rain across much of Queensland, are likely to be “intense”.

Mr Saunders said an upper level trough was the cause of the weather drama pushing up from southern Australia.

“That trough will interact with tropical moisture to produce unseasonable rain (breaking) even July records”.

Darwin copped 8mm of rain on Thursday while Katherine saw more than 10mm.

Clearing by Saturday the system is then likely to move into Queensland.

“The falls should intensify on Sunday with heavy falls likely on Monday and Tuesday through northern and eastern Queensland,” said Mr Saunders.

Between Friday and Tuesday, Rockhampton is looking at between 100-175mm of rain. Mackay could push 200mm.

“Mackay, Rockhampton – they only average about 35mm in the entire month of July. So you’re talking about a season’s worth of rain falling in one week.”

Cairns could see up to 30mm on Friday, a respite for the weekend, then between another 10 and 50mm on Monday and Tuesday with highs of 27C.

Brisbane will be soggy too. Friday could see 10-20mm come down and then 15-25mm on Saturday. A shower or two on Sunday will lead up to another 10mm on Monday and 35mm possible for Tuesday.

The Queensland capital should see highs of between 17-21C and minimums in the low teens.

Originally published as ‘Be ready’: SES and BOM issue warning as a month’s rain to fall in a single day

Gas is getting so expensive, it’s getting stolen right out of gas tanks