The excitement around esports is growing. But where are the profits? 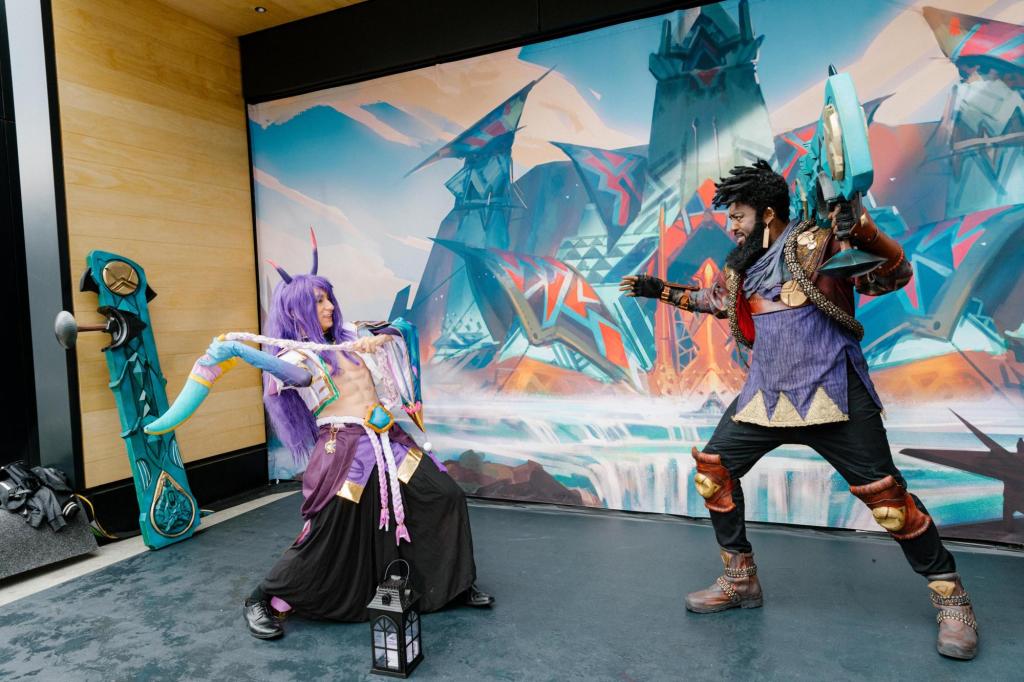 It had been more than three hours of tense, back-and-forth combat — projected across the massive Jumbotron at San Francisco’s Chase Center — when the sellout crowd, thumping together inflatable thundersticks and yelling with excitement, sensed victory was at hand.

A South Korean esports team, DRX, guided their video game characters into the home base of the rival T1 squad and smashed its Nexus, a blue gemstone, to pieces, clinching this year’s League of Legends world championship.

Fans roared their approval, fireworks flared, the winners embraced, and the losers sobbed into their keyboards. Executives from Riot Games, the League of Legends publisher, presented DRX with diamond rings sponsored by Mercedes, celebrating the pinnacle of the professional video game scene.

It was a perfectly choreographed event, the kind of spectacle gaming publishers had promised investors from the traditional sports world when they first pitched them on putting their money into the rapidly growing esports industry in the mid-2010s.

“I remember seeing a team come out, and the fans were going crazy and asking for autographs. I thought, ‘Oh, my gosh, this is just like our experience,’” said Zach Leonsis, the son of Ted Leonsis, who owns the NBA’s Washington Wizards and the NHL’s Washington Capitals. The younger Leonsis invested in an esports team in 2016.

But despite the industry’s growth and appeal to the young consumers traditional sports owners are desperate to attract, the money has not followed. Some sports owners have soured on the industry’s short-term prospects after discovering that the methods that make money in traditional sports — like building fan bases in specific cities and striking lucrative deals with television networks — don’t always apply in esports.

Most have not yet turned a profit or seen a return on their investments, and the gaming publishers that control the biggest competitive leagues in North America, like Riot and Activision Blizzard, are operating those leagues at a loss or just beginning to break even.

Although major esports events sell out buildings like the Chase Center and attract tens of millions of viewers in China, tickets cost less than for traditional sports games, and far fewer Americans are watching esports than the 12.4 million who watched the 2022 NBA finals or the 17 million the NFL averaged for 2021 regular-season games, a difference that means less interest from advertisers.

Most critically, leagues like the NBA and NFL earn billions of dollars each year through broadcast deals with television networks, while many esports are streamed for free on sites like YouTube and Twitch. Some early revenue projections included anticipated broadcasting deals with Twitch and YouTube that were less lucrative and consistent than expected.

Of course, esports investors did not expect the industry to supplant traditional sports in just a few years. But some have still been underwhelmed by early returns.

“They certainly pitched us that the growth of these leagues would be meteoric, and we all drank the Kool-Aid,” said Ben Spoont, CEO of an esports organization called Misfits Gaming, whose backers include the owners of the NBA’s Orlando Magic and the NFL’s Cleveland Browns. “What has happened is that growth has not materialized as fast as we had hoped.”

There are other challenges. Most League of Legends competitions in North America take place at Riot’s arena in Los Angeles, where many teams are based. That deprives esports teams of a chance to make money hosting games or to build a fan base in a specific region.

Activision aimed to change that with leagues based on Overwatch and Call of Duty, its first-person shooter games. Both would hold home and away matches, with teams located around the country like traditional sports teams. Activision charged investors $20 million to join the Overwatch League.

But the league was just building momentum when the COVID-19 pandemic forced it to cancel in-person events. Since then, it has struggled to gain traction. Activision allowed teams to defer fees to be in the league and is now helping teams cover their costs, paying each of the league’s 20 teams about $1 million this year, according to a person with knowledge of the league’s finances.

“Even with the recalibration brought on by the pandemic, we’ve had full arenas and record viewership,” said Joe Christinat, an Activision spokesperson, adding that there was “overwhelming enthusiasm” for the new Overwatch and Call of Duty games. “Our fans want these leagues, and we remain committed to them.”

Investors have also realized that game publishers’ incentives are not necessarily aligned with their own. Publishers can afford to operate money-losing esports leagues as long as they drive interest in their profitable video games, so they sometimes prioritize growth over revenue. Riot, for instance, might hesitate to sign a contract to broadcast League of Legends exclusively on YouTube or Twitch because it would preclude viewers in China, where both services are blocked, from tuning in.

Those kinds of conflicting aims have at times led to tense negotiations.

“It’s a push and pull,” said Kirk Lacob, the son of Joe Lacob, who owns the Golden State Warriors. “I’ve had long discussions with various members at Riot over the years.” In addition to serving as executive vice president of basketball operations, Kirk Lacob oversees the Warriors’ esports teams.

Lacob’s point of view is common among the sports ownership groups that have bought or invested in esports teams, a list that includes Stan Kroenke of the Los Angeles Rams, Robert Kraft of the New England Patriots and Hal Steinbrenner of the New York Yankees. A former gamer, Lacob discovered the competitive gaming scene in recent years and was enthralled by the prospect of reaching a young and growing audience. He remains bullish on the industry — but would like to start seeing some results.

“I really believe that where there are eyeballs, where there’s usage, there’s eventually revenue,” he said.

Gaming executives urge patience. They say esports, popular for decades in Asia, are still nascent in North America and should be thought of more as a high-growth startup than a fully mature business. U.S. viewers watched an estimated 217 million hours of esports content this year, according to the data firm Stream Hatchet, up from 147 million in 2018. “We often say that we’re still in the leather helmet days of the NFL,” said Naz Aletaha, Riot’s global head of League of Legends esports.

Many investors in the space still believe esports will eventually become a dominant, profitable industry. But in the short term, some are “very frustrated,” said John Needham, Riot’s president of esports, adding that Riot has worked to convince investors to embrace a different monetization model.

Although sponsorships still make up a majority of revenue, a cornerstone of Riot’s strategy involves microtransactions: selling recreational League of Legends players in-game items for their characters that are themed around real-world esports events like the world championship.

It sounds like a niche revenue source, but early numbers have been eye-popping. When Riot hosted its 2022 championship event for Valorant, another esport, it made $40 million from microtransactions alone. Half of that went to the league’s teams through a revenue-sharing agreement.

“This is where we’re going to disrupt the broadcast revenue formula, because that scales,” Needham said.

For now, the costly endeavor of fielding competitive teams is simply a catalyst for the real revenue-generating operations at many esports organizations. Prominent teams like FaZe Clan and 100 Thieves have morphed into more general lifestyle brands that offer viewers apparel and livestreaming entertainment. FaZe Clan, which went public this year in what was seen as a bellwether for the industry, is losing money and cutting costs as shares of its stock plummet.

“It creates value elsewhere in their ecosystem,” LaHaye said. “It’s worth it to have a loss leader in terms of a product that creates the brand, and then you end up selling normal products to people.”

Even Team Liquid, considered one of the more competition-focused esports organizations, has made much of its money elsewhere and now has nine separate sources of revenue, including owning an esports encyclopedia website, said Mark Vela, CEO of Axiomatic Gaming, Team Liquid’s ownership group.

“It’s a natural evolution,” Vela said. “Everyone’s having to take a step back and seeing what’s really working for us here.”

Team Liquid, which took in more than $38 million in revenue last year, is not yet profitable, but Vela, whose ownership group includes the Leonsis father-son duo, said esports remain alluring because of the rare type of young, affluent viewer they attract.

Spoont is also optimistic long term, but he is not willing to wait. In July, he sold his European League of Legends team to a Spanish esports group for about $35 million. He said he was pivoting Misfits to focus on content creation, partly because it could be another decade before competitive esports reach their potential.

“We were trying to accomplish as an industry what took the NBA 50 years, but we were trying to do it within a five-year time period,” he said, referring to the many NBA teams that were not immediately lucrative businesses. “Turns out that it doesn’t happen.”

This article originally appeared in The New York Times.