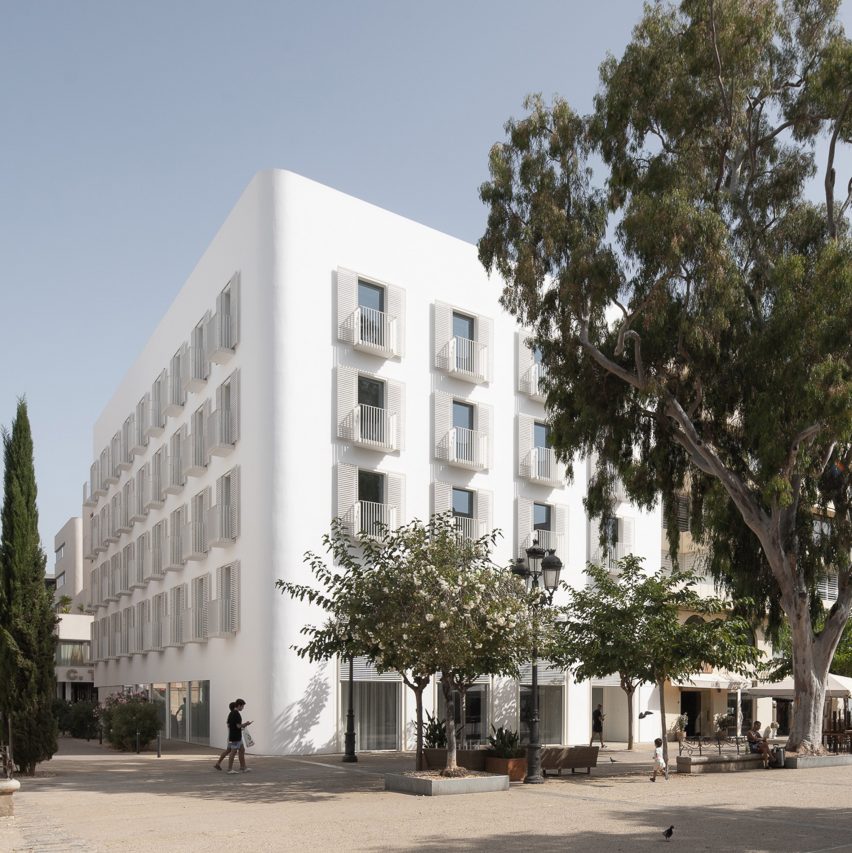 Boutique hotel group The Standard has housed a hotel in Ibiza in a former movie theatre with interiors designed by its in-house design team.

Located in the heart of Ibiza Town in a former movie theatre, The Standard Ibiza contains 67 guest suites, restaurants, a rooftop bar and a swimming pool with panoramic views of the island. The project was overseen by architect and interior designer Lázaro Rosa-Violán.

“The specific location was the former site of an old movie theatre in the heart of town,” The Standard International’s chief design officer Verena Haller told Dezeen. “It was a place where locals came together throughout the year.”

“Inspired by that, we knew we wanted to create something which would revive that energy for the local crowd, which is also always a hallmark of what we do so it was a good match in that regard.”

When designing the interiors, The Standard team drew on the “lore and sensibility” of the island’s bohemian and “flower power” history, which emerged from Ibiza’s role as a haven from Spain’s dictatorship and the Vietnam War draft.

This design choice was a “perfect nod” to the island’s style and provided a juxtaposition with the starker exterior of the former movie theatre, said Haller.

“Our team rallied around this direction because it felt spot-on for us and it’s something that has been lost over time despite it perhaps being the golden age of Ibiza in a way,” Haller added.

The Standard designed the guest suites as a respite from the business of the town and the hotel’s public spaces. The suites have a pared-back beach-villa look with retro-informed furnishings that speak to the hotel’s bohemian identity.

Tones of white, grey and beige were used for the walls and floors.

The furnishings and fixtures are made with natural materials and light woods.

The team used the “layering” of texture, furniture and plants to bring dimension to the interiors and play off the Spanish sun, which enters the hotel through its shutter-lined windows.

“It is important to see layering and pattern, textures and colour, the shadow play of the plants inside and out through sunlight during the day and warm temperature lights at night,” said Haller.

Contrasting to the hotel’s guest suites, the hotel’s public spaces, which include Jara, a ground-floor restaurant, and Up, a rooftop lounge and pool, were designed with more of a maximalist look.

Retro-style shapes and patterns were incorporated throughout the interior of the ground-floor restaurant while seating was upholstered in rich greens and tropical leaf-printed fabrics.

“We wanted the interiors to convey the feelings we love about Ibiza,” said Haller. “The effortlessness of a chic holiday on the island with your closest friends. Not the mega clubs!”

“The public spaces are a clear departure from that, filled with rich layers of colours, patterns and textures and the type of casual vibrancy that only The Standard can create.”

In 2019, The Standard opened its first UK hotel inside the former Camden Town Hall Annexe, a brutalist building in King’s Cross, which featured colourful interiors.

Elsewhere in Ibiza, architecture studio Marià Castelló designed a retreat that is formed of five bright white volumes and linked by glass corridors.

Images are courtesy of The Standard.