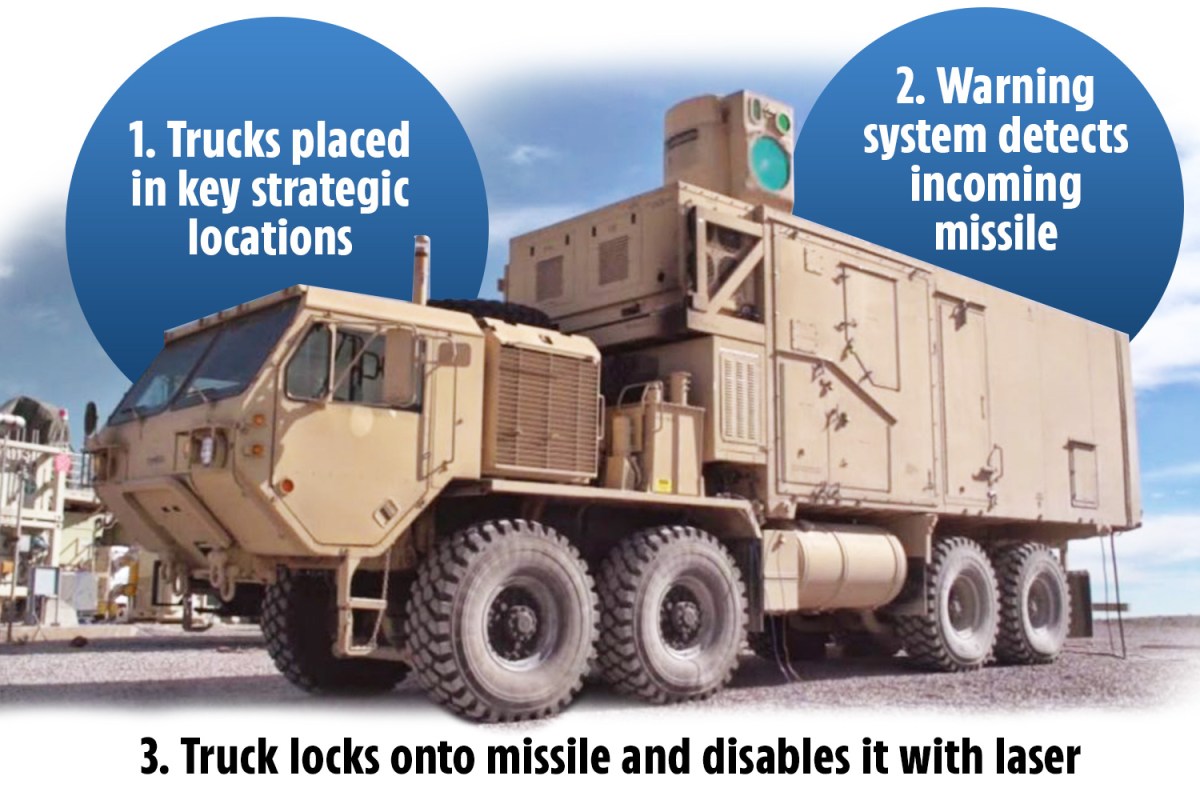 THE US Air Force wants to develop a high tech “force field” to stop incoming missiles from reaching US soil by 2060.

The defence system would involve a network of laser-mounted trucks that shoot down projectiles before they hit their targets.

A proposal for the bonkers system forms part of a new official report on the future of directed energy weapons – the US military term for lasers.

In it, the Air Force Research Lab (AFRL), which develops the weapons of the future, details how lasers might be used in the coming decades.

One potential use for the technology – in which the US military has invested heavily in recent years – is a defensive “force field”, researchers wrote.

While the AFRL accepts that such a system would require substantial investment and development, it suggested that directed energy weaponry has reached a “tipping point” of practicality.

In a press release, the research body said: “The concept of a [directed energy] weapon creating a localized force field may be just on the horizon.”

How exactly such a system would work isn’t clear.

Rather than a bubble of laser energy – as seen in many Sci-Fi flicks – the “force field” would involve a web of trucks or satellites.

These would be loaded with laser weapons that could shoot down projectiles, a little like the high-tech Iron Dome missile shield used by Israel to knock out incoming rockets.

“By 2060 a sufficiently large fleet or constellation of high-altitude [directed energy weapon] systems could provide a missile defence umbrella,” the report reads.

It added that development would only proceed if such concepts prove “affordable and necessary”.

AFRL chief scientist Jermey Murray-Krezan said that the system could one day be used to shoot down nuclear missiles in mid-air.

“By 2060 we can predict that [directed energy] systems will become more effective, and this idea of a force field includes methods to destroy other threats too,” he said in the release.

“Eventually there may be potential to achieve the penultimate goal of a Nuclear or ballistic missile umbrella.

“It’s fun to think about what that might be in 2060, but we don’t want to speculate too much.”

It may sound like something straight out of a science fiction movie, but laser weapons have been in development for years.

The US first deployed lasers to Naval forces in 2014. It is reportedly aiming to trial a prototype Star Wars-style laser cannon by 2022.

Such a weapon could be extremely useful in combating drones and small missiles.

Against human enemies, the weapon could cause a nasty burn, or even temporary or permanent blindness.

Laser weapons that blind troops are currently banned under a 1995 treaty.

China and Russia are also said to be working on their own laser technology to match that being developed by the US.

Want to know more about the weird and wonderful world of science? From space and astronomy to the human body, we have you covered…

US Air Force invents ‘bomb laser’ that can detonate explosives and landmines from 1,000 feet away

In other news, the US Army has quietly revealed it’s building a Star Wars style cannon said to be the most powerful laser weapon in the world.

The US Navy experimented on far-fetched technologies including a “space modification weapon”, according to leaked documents.

Military researchers are also reportedly developing a laser weapon that can generate the sound of a voice out of thin air.

And, the US Army is also testing a 50-kilowatt laser weapon that incinerates drones, helicopters, planes and missiles.

No time (or reason) for summertime blues