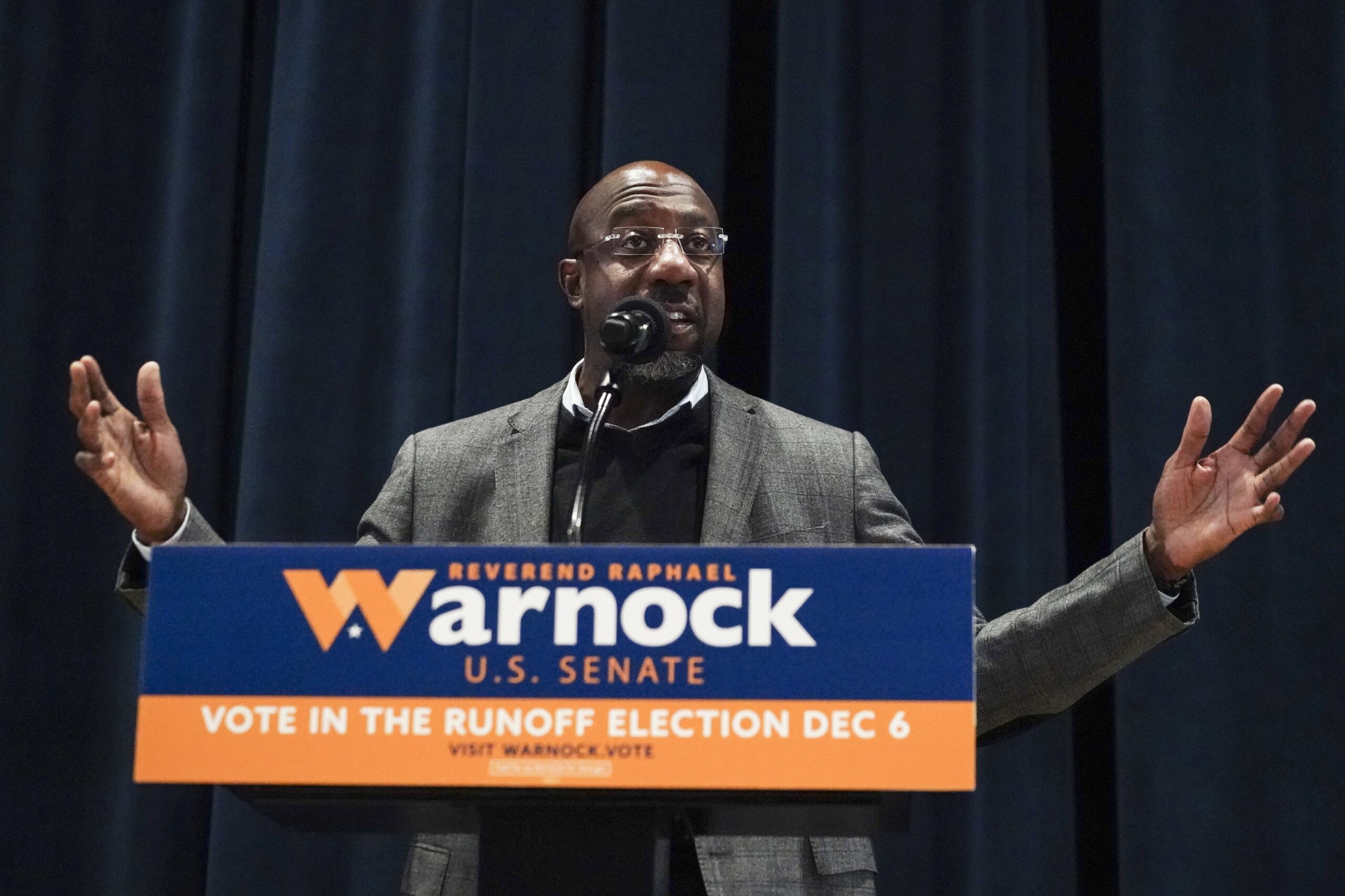 ATLANTA (AP) — Georgia voters on Tuesday are set to decide the final Senate contest in the country, choosing between Democratic Sen. Raphael Warnock and Republican football legend Herschel Walker after a four-week runoff blitz that has drawn a flood of outside spending to an increasingly personal fight.

This year’s runoff has lower stakes than the two in 2021, when victories by Warnock and fellow Georgia Democrat Jon Ossoff gave Democrats control of the Senate. The outcome of Tuesday’s contest will determine whether Democrats have an outright 51-49 Senate majority or control a 50-50 chamber based on Vice President Kamala Harris’ tiebreaking vote.

The runoff brings to a close a bitter fight between Warnock, the state’s first Black senator and the senior minister of the Atlanta church where Martin Luther King Jr. preached, and Walker, a former University of Georgia football star and political novice who has waged his bid in the mold of former President Donald Trump.

A victory for Warnock would solidify Georgia’s status as a battleground heading into the 2024 presidential election. A win for Walker, however, could be an indication that the Democratic gains in the state might be somewhat limited, especially given that Georgia Republicans swept every other statewide contest last month.

In that election, Warnock led Walker by about 37,000 votes out of almost 4 million cast but fell shy of a majority, triggering the second round of voting. About 1.9 million votes already have been cast by mail and during early voting, an advantage for Democrats whose voters more commonly cast ballots this way. Republicans typically fare better on voting done on Election Day, with the margins determining the winner.

Last month, Walker, 60, ran more than 200,000 votes behind Republican Gov. Brian Kemp after a campaign dogged by intense scrutiny of his past, meandering campaign speeches and a bevy of damaging allegations, including claims that he paid for two former girlfriends’ abortions — accusations that Walker has denied.

Warnock, whose victory in 2021 was in a special election to serve out the remainder of GOP Sen. Johnny Isakson’s term, sounded a confident note Monday during a packed day of campaigning. He predicted that he had convinced enough voters, including independents and moderate Republicans who supported Kemp, that he deserves a full term.

“They’ve seen that I will work with anybody that helps me to do good work for the people of Georgia,” said the 53-year-old senator. “I think they’re going to get this right. They know this race is about competence and character.”

Walker campaigned Monday with his wife, Julie, greeting supporters and offering thanks rather than his usual campaign speech and full-throated attacks on Warnock.

“I love y’all, and we’re gonna win this election,” he said at a winery in Ellijay, comparing it to championships he won as an athlete. “I love winning championships.

Warnock’s campaign has spent about $170 million on the campaign, far outpacing Walker’s nearly $60 million, according to their latest federal disclosures. But Democratic and Republican party committees, along with other political action committees, have spent even more.

The senator has paired his push for bipartisanship with an emphasis on his personal values, buoyed by his status as senior pastor of Atlanta’s Ebenezer Baptist Church. And, beginning with the closing stretch before the Nov. 8 general election, Warnock added withering takedowns of Walker, using the football star’s rocky past to argue that the political newcomer was “not ready” and “not fit” for high office.

Walker, who used his athletics fame to coast to the GOP nomination, has sought to portray Warnock as a yes-man for President Joe Biden. Walker has sometimes made the attack in especially personal terms, complete with accusing Warnock of having his “back bent” and “being on his knees, begging” at the White House — a searing charge for a Black challenger to level against a Black senator about his relationship with a white president.

A multimillionaire businessman, Walker has inflated his philanthropic activities and business achievements, including claiming that his company employed hundreds of people and grossed tens of millions of dollars in sales annually, even though later records indicate he had eight employees and averaged about $1.5 million a year. He has suggested that he’s worked as a law enforcement officer and said he graduated college, though he has done neither.

Walker was also forced to acknowledge during the campaign that he had fathered three children out of wedlock whom he had never before spoken about publicly — in direct conflict with Walker’s yearslong criticism of absentee fathers and his calls for Black men, in particular, to play an active role in their kids’ lives.

His ex-wife has detailed violent acts, saying Walker once held a gun to her head and threatened to kill her. Walker has never denied those specifics and wrote of his violent tendencies in a 2008 memoir that attributed the behavior to mental illness.

Warnock has countered with his individual Senate accomplishments, touting a provision he sponsored to cap insulin costs for Medicare patients while reminding voters that Republicans blocked his larger idea to cap those costs for all insulin-dependent patients. He hailed deals on infrastructure and maternal health care forged with Republicans Ted Cruz of Texas and Marco Rubio of Florida, mentioning those GOP colleagues more than he did Biden, Senate Majority Leader Chuck Schumer or other Democrats in Washington.

After the general election, Biden, who has struggled with low approval ratings, promised to help Warnock in any way he could, even if it meant staying away from Georgia. Bypassing the president, Warnock decided instead to campaign with former President Barack Obama in the days before the runoff election.

For his part, Walker was endorsed by Trump but avoided campaigning with him until the campaign’s final day: The pair conducted a conference call Monday with supporters, according to a Republican National Committee spokesperson.

Walker’s candidacy is the GOP’s last chance to flip a Senate seat this year. Dr. Mehmet Oz of Pennsylvania, Blake Masters of Arizona, Adam Laxalt of Nevada and Don Bolduc of New Hampshire, all Trump loyalists, already lost competitive Senate races that Republicans once considered part of their path to a majority.

Walker has differentiated himself from Trump in a notable way. Trump has spent two years falsely claiming that his loss in Georgia and nationally was fraudulent, despite the fact that numerous federal and local officials, a long list of courts, top former campaign staffers and even his own attorney general have all said there is no evidence of the fraud he alleges.

At his lone debate against Warnock in October, Walker was asked whether he’d accept the results even if he lost. He replied with one word: “Yes.”