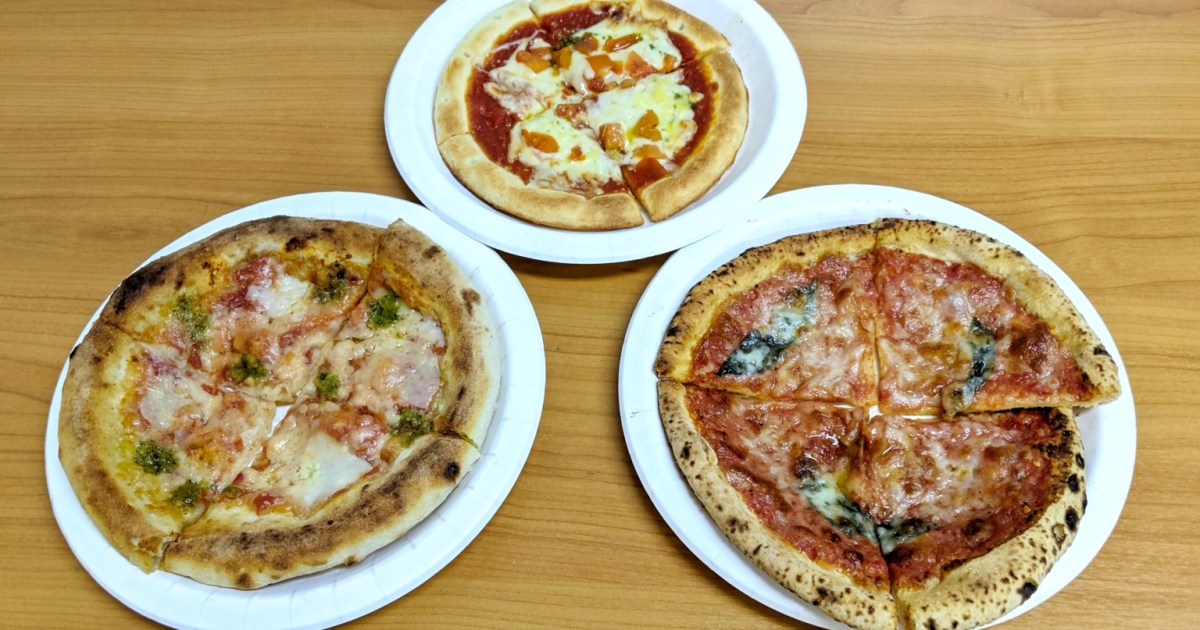 To celebrate Pizza Day in Japan on 20 November, in honour of the birthday of Queen Margherita of Italy, our Japanese-language reporters decided to celebrate in the best way possible: by comparing margherita pizzas from the top Japanese convenience store chains.

So, without further ado, the three contenders for this frozen pizza showdown are:

The prices are as varied as the pizzas themselves, but what makes this a level playing field is the fact that each one is an own-brand frozen margherita that represents each chain. So let’s start by assessing the look of each pizza straight out of the bag.

The 7-Eleven pizza contains Italian tomato sauce, mozzarella and extra virgin olive oil. It looks pretty authentic, which isn’t surprising as it’s been created under the supervision of a famous chef.

Family Mart’s offering has also been supervised by a famous chef and it contains three types of cheese: Cow’s milk mozzarella, buffalo mozzarella and grana padano.

The Lawson pizza is the only one that hasn’t been created in conjunction with a famous chef, and it shows in its simple appearance. Still, it’s markedly cheaper than the others, so it does have that going for it.

▼ After judging their appearances, it was time to heat these up and get down to the real tasting.

Our taste-testers for today are: Yoshio Ueda, Masanuki Sunakoma, Seiji Nakazawa, and Mr. Sato (who’s behind the camera here).

These taste-testers were hungry for pizza, and they weren’t messing around either, because after scoffing down a slice of each one, it didn’t take them long to unanimously agree that the best pizza of the day was…

What made this the outright winner was the quality and overall balance of flavour, which were both outstanding. Our taste-testers had a hard time believing you could get this level of flavour from a frozen pizza, as the aromas were amazing as well, thanks to the fresh basil leaves on top.

▼ The long-fermented dough created an excellent crispy-yet-chewy texture that was similar to what you’d get at a pizzeria.

And now, in second place, we have…

The Family Mart pizza also had a well-rounded balance of flavours, and the three different types of cheese in the topping were a perfect match for the chewy dough. The taste of tomato sauce was a lot more subdued here, as was the basil, due to it appearing as a sauce rather than fresh leaves, making the cheese the real highlight.

▼ A slice of heaven for cheese lovers.

▼ That means the pizza in third place belongs to…Lawson.

Well, considering the price difference, it was pretty inevitable that the Lawson margherita wouldn’t be able to hold a flame to the ones from Family Mart and 7-Eleven, which didn’t skimp on quality ingredients and attention to detail.

Still, it’s not a bad deal for 298 yen, and according to our taste-testers, this one tasted like a pizza you’d get at a family restaurant — nothing fancy but a reliable flavour, and a size that’s just right for eating as a snack.

Poland to require vaccine shots for…